Today in seventh grade we read a poem from the Poetry Friday Anthology for Middle School about what you can see out the window.  The poem, by Lesléa Newman, is called "After the Blizzard, Outside my Window."  It's a sonnet, describing the "tuxedo cat" and other creatures that can be seen in the snow.  The concluding couplet is: "To think that all of this is mine for free, / The world is so much better than TV!"

No sooner had I finished reading the poem than the kids started protesting.  They have big walls around their houses.  They can't see anything out their windows.  Their parents don't want them at the window because people will see them, and they might get kidnapped.  There are power lines and that's all.  Amused at their vehemence, I put up a topic on the board for their consideration: 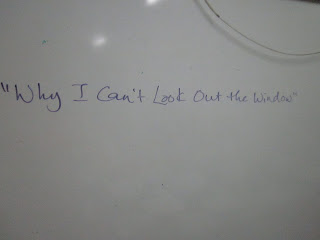 After they left, it was my free period, and I was supposed to write quizzes, but instead I wrote my own sonnet.  Here it is:

Why I Can’t Look Out the Window

You say the world is better than TV
And I imagine that you haven’t lied
But when I go out on my balcony
My mother tells me to come back inside.
She worries about kidnapping and such
And anyway, all I can see is wall
Topped with barbed wire, painful to the touch,
And really, there is nothing else at all.

Well, there’s a power line, and there’s a bird
And blue skies way up there, with wispy cloud
But Mom is asking if I haven’t heard.
I’d look some more, but I am not allowed.

I will explore the world once I am able
But while I’m waiting, I’ll make do with cable.

Here's a poem I wrote a while ago about the sounds I hear from my house.

And Miss Rumphius has the roundup.

Ruth, I love both this and the other sonnet you linked to. What great conversations you had with your students!

Great poem, but a sad reality. I'm glad you're having these conversations with your students.

Ruth, this is such a powerful poem, and (sadly) beautiful. I love how poetry can illuminate intricacies both good and bad. Thanks so much for sharing this--those kids are so blessed to have you as their teacher.

Your poem gives a light-hearted perspective to a tough reality, Ruth. I love the last line: "But while I’m waiting, I’ll make do with cable." Hee-hee. Thanks for sharing. =)

Yes! We often make a lot of assumptions as writers that don't hold true for all readers, even if we wish they did. Love your conversations and your sonnet!

I can understand your need to write your own poem after that class. Light-hearted, but sad. I agree. Delightful last line!

I love the way you put this poem together, Ruth...and I'm sad about the picture it paints for these kids: walls and barbed wire.

What a sad inspiration for a wonderful poem. You had just the right touch for kids in that situation; a light hand, with a humorous twist to finish.

Ruth, it is amazing that your students live a far different life than ours here. The sad realities of life are seen by children who may not know what to make of all of their surroundings. Your poem brings to mind a school I worked in that was in the middle of tenement apartments in the red light district. Poverty was everywhere but we tried to make the school a joyous place. Your second poem has so many visuals for the reader. Thank you for both. I wanted to share with you that I placed one of your traveling photos in my Summerscapes Gallery. You can access it at http://beyondliteracylink.blogspot.com/2016/10/unveiling-summerscapes-gallery.html. Thank you for offering it. If you have anything you would like to share for my Autumnventure Gallery please let me know.

Your poem and your post stopped me in my tracks. It's so easy to make assumptions as a writer, but you so poignantly showed how different a reader's reality can be. So glad you're having these discussions with your students--and how wonderful to share your sonnet with them (and us!)

Sad to see barbed wire instead of green. I like the funny last line, though. We find our joy where we can, don't we?

It's great that your students feel comfortable contradicting you, and launching into big conversations. That's a sure sign of a great teacher, and a supportive classroom environment.

Thank you for letting us be your students, too :-)
What is your kids' response to poems about students getting distracted by snow falling outside the school window? Have you read Taylor Mali's Undivided Attention?
https://www.taylormali.com/poems-online/undivided-attention/

This is what poetry is! Response to the world...response to the first poem, response to your student's thoughts, and response with some hope peppered in. Love it Ruth. You rock! I want to be in your class.