I am once again doing a Photo-a-Day project this year. For a few years I've been doing a daily photo on social media during Lent and Advent, and I noticed how it gave me a little boost every day and helped me start my mornings in a creative frame of mind. I went looking for some daily prompts that would last from January through December. Now it's my fourth year of this practice, but my first with a new set of prompts. I was using the Capture Your 365 prompts, but the owner, Katrina, closed that business at the end of last year. There's a new site now called 365 Picture Today, and that's where I'm getting my prompts for 2020. They're using the National Holiday Calendar, and each day they have taken one of the observations, some of which are serious and some frivolous, and turned it into a prompt.

Thursday this week (today, as I'm writing this post) was Handwriting Day. It was also a color day (there's one every month) and today's color was red. I wrote out a Lisel Miller poem I first read on Tabatha's blog, The Opposite of Indifference, in red, and then took a picture of it with some potatoes. I didn't have any of the other things referenced in the poem, like earthworms, or maple seeds, or mushrooms, or dandelions, but I did have ordinary, common, dull as dirt potatoes. And really, what better metaphor for hope could there be? 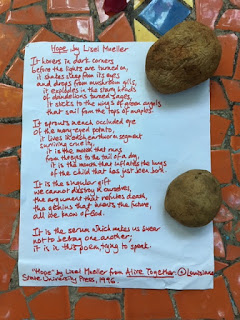 Here's a link to the text on the Writer's Almanac site.

I think hope has to be ordinary, because you have to keep mustering it again and again, day after day. If it were something exotic and rare, like a peacock landing on your roof, it would be hard to wait around for it. But if you can find it in your pantry, still with a little bit of soil on it from the earth, it's a lot more achievable.

On Thursday morning when I awoke, early, it was raining. It doesn't usually rain much in January here in Haiti, and it made me think of the Canterbury Tales, "Whan that Aprille with his shoures soote, The droghte of March hath perced to the roote," (When April with its sweet showers has pierced the drought of March to the root), except it would be January's drought that was being pierced. The rain felt hopeful, though not spectacular, more ordinary like potatoes, and it corresponded with a lot of other happy and hopeful thoughts. Those thoughts led to this haiku:

Ruts in the road, the ordinary places of life, can become new puddles, new sources of life and joy. That's hopeful. That's joyful. That's worth a little poetry.

I can definitely relate to drought and rain. We have had both today! I especially like this closing reflection; Ruts in the road, the ordinary places of life, can become new puddles, new sources of life and joy.

I never thought of a potato eye as a part of hope, but it is, isn't it? I love how you created for your prompt, Ruth. Isn't poetry wonderful? Thanks for this lovely poem!

Thank you for this poem filled with signs of hope (I needed some!), the thought that hope must be ordinary, and the image of rain filling puddles. I love the idea of a daily prompt--I think I should plan ahead a bit better!

Those potato eyes sprout in the most unexpected ways, just as hope comes in unexpected packages. Ordinary in a way, but also
pointing in direction we may not expect. May your potatoes sprout, and may you enjoy the splash of puddles.

Ruth, hope does find its ra==way to help us sort each day. I do love how you used the puddle in a positive way: new sources of life and joy. Keep on harnessing the power of hope.

What fresh perspective you bring.

Yes! Hope in the ordinary, from potatoes to puddles. I love it.

Sounds like joy-filled puddles that are building from your "soaking morning rain" wonderful haiku and post Ruth! We so need some of this everyday hope–love the potato poem too, and the red bricks encircling it. Have fun with your photo journeying this year… thanks!

"It is the serum that makes us swear not to betray one another" -- wow.

I can picture your ruts in the road, pierced with rain, Ruth.