Here's what I've been reading:

Book #86 of the year was Mildred D. Taylor's Let the Circle Be Unbroken. This is the sequel to Roll of Thunder, Hear My Cry, which I recently read with my seventh graders. The kids wanted to know what would happen to T.J., and I found out the answer to that question early in this book. Sigh. Nothing good. Again, this book is a dramatization of what it was like to live in the Jim Crow south. Tough but beautiful reading.

Book #87 was Feathers, by Jacqueline Woodson. It's the story of Frannie, who reads Emily Dickinson in school and learns about "the thing with feathers" through various experiences of her life.

Book #88 was Lily's Crossing, by Patricia Reilly Giff. Set in the summer of 1944, it's about Lily and her new friend Albert, a refugee from Hungary, and the way the two of them experience the repercussions of World War II.

Book #89 was Washington Black, by Esi Edugyan, the amazing story of George Washington Black, who begins his life as a slave in Barbados, and will end up - where and how? Just about anything could happen in this book, in spite of the brutal, confined future that seems all the world has to offer to someone like him in the 1830s. This is one of the best books I've read this year. 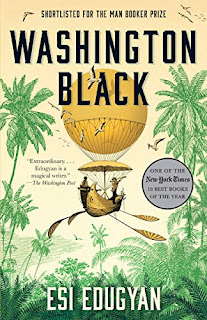