Poetry Friday: Conversation with a Ghost from Derek Walcott's Omeros

I've been rereading Derek Walcott's Omeros, a Caribbean retelling (sort of) of Homer's Odyssey. I could keep reading it forever, always finding new aspects. Sometimes something incredibly complex like this work is what you want to read, something that you have to wrestle with and read again and again. At least, that's how I feel. (I wrote more about Omeros here.) After I share an extract from Walcott, I've got a poem I wrote using some of his words.

I picked this to share today because of the way I've been kept from travel the last 16 months or so. I'm "stuck" here on a Caribbean island, which is not at all the worst fate one could imagine. I miss the family members I can't go to see, especially my daughter, but there's so much that's beautiful here.

In this extract, Walcott (or the version of him in the poem) meets the ghost of his father (who died when Walcott was a child) on the cold beach in Boston. (You can see what I meant by calling this "a retelling (sort of)." There's a lot of other stuff in it as well.)

Walcott is talking as the extract begins, telling his father's ghost that this place is too cold for them to talk. His father suggests a warmer place, and then talks about his travels around the world, and how he ended up coming back to his island and loving it. 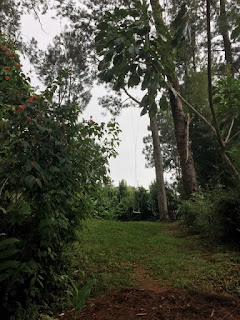 "cherish our island for its green simplicities"

I said, "This is hardly the place; maybe I called

but it's too cold for talk; this happens to old men,

and I'm nearly there. You could have been my child,

and the more I live, the more our ages widen."

"We could go to a warmer place." My father smiled.

"Oh, not where you think, an island close to Eden.

But before you return, you must enter cities

that open like The World's Classics, in which I dreamt

I saw my shadow on their flagstones, histories

that carried me over the bridge of self-contempt,

though I never stared in their rivers, great abbeys

soaring in net-webbed stone, when I felt diminished

even by a postcard. Those things I wrote to please

your mother and our friends, unrevised, unfinished,

in drawing-room concerts died in their own applause.

Way back in the days of the barber's winding sheet,

I longed for those streets that History had made great,

but the island became my fortress and retreat,

in that circle of friends that I could dominate.

Dominate, Dominus. With His privilege,

I felt like the "I" that looks down on an island,

the way that a crested palm looks down from its ridge

on a harbour warmer than this one, or my hand.

But there is pride in cities, so remember this:

Once you have seen everything and gone everywhere,

cherish our island for its green simplicities,

enthrone yourself, if your sheet is a barber-chair,

a sail leaving harbour and a sail coming in,

the shadows of grape-leaves on sunlit verandahs

and yet in its travelling all that the sea-swift does

it does in a circular pattern. Remember that, son."

The surf was dark. The lights stuttered in the windows

along the empty beach, red and green lights tossed on

with lights for holes, the black skyscrapers of Boston.

I took a quote from this passage and wrote a golden shovel poem:

Sometimes you don't know what you cherish

Until you can't have it any more - our

Affectionate kiss of greeting on this island

Is gone for now; for

Now we stay apart as contagion spreads its

Dangers. But rain falls gently, the world is green,

We hold our families, fall back on simplicities.

What a lovely shovel, Ruth. I miss welcomes of hugs and kisses with family and friends, too.

Ruth, I loved linking back to your original post. The descriptions in the poem are so beautiful: "soaked like paper, the hills were a Chinese scroll/and she saw a subtlety where none was before." Thank you for sharing this poem with me and then writing your Golden Shovel poem-just what I needed to escape the heaviness of days lately.

Everything is beautiful when you just look, isn't it? I've often used the words "pay attention" to myself during this time. I am grateful for what I have, something Walcott seems to be saying in his poem I love that you connected to this in your own experience this year, confined but leaning on those "green simplicities". Thank you for this, Ruth!

Wow, your whole post resonates with me, Ruth! Your words: "I miss the family members I can't go to see, especially my daughter, but there's so much that's beautiful here" mirror my life right now(only my here is Switzerland and my eldest daughter is in California). Your Golden Shovel from Walcott's words is resonant as well. "fall back on simplicities" - yes!

Oh that's exactly the line that I would select! I feel that way about living here at the lake. Yes, so grateful. But we are allowed our heartbreaks too. xo

Thanks for the wonderful Walcott excerpt and for your golden shovel -- well done! Needed this rich food for thought this week.

Thank you, Ruth. Sometimes we don't know what we cherish...

Thank you for all of this. I have not read Derek Walcott and loved what you shared. Then your Golden Shovel, lovely. The grass being greener, too, is not always true, as we may find out too late to matter. My father told me once that the secret to happiness in life was to be satisfied with everything you have at any point in time. He said there is always something "better or nicer or whatever" out there that you could want (covet?), but if you focus on what you have and are grateful, well, you will be happy. And that you should not go into great debt to acquire something you want ie a boat or nicer car. That you should save and plan and work and then you will appreciate it even more. These nuggets our parents give us....we never know which we will recall, which will resonate....and then a poem or a post brings it home so clearly. Again, thanks.
Janet Clare F.

Thank you for posting about Derek Walcott. He's someone I have always wanted to read so thanks for this small taste. Your poem captures what I've been noticing, that there is much to miss from normal life, but still much to enjoy. Thanks, Ruth.

Your poem is lovely, Ruth. My favorite line is "We hold our families, fall back on simplicities."

Walcott is a famous Caribbean family name I first became aware of through cricket. I love Derek Walcott's poem and its embedded wisdom. Your golden shovel poem speaks to these times and is a most fitting accompaniment to the first poem. Thank you Ruth.

Wow. Your golden shovel is lovely. Heartbreak and healing, all in one, as always. Love.

Thank you for such a rich and thoughtful post. I love how you chose a line that begins with the word cherish. It's such a beautiful meaning. We need to cherish in the midst of all, don't we?

I like "the shadows of grape-leaves on sunlit verandahs/made me content" and the bit about the sea-swift going in circles. Thanks, Ruth. xo

Such richness here - I think I need to read Omeros. You description of it alone is compelling, then, that excerpt ... stunning detail and words and images of a place that sounds like paradise should look. Your golden shovel rings with great truths - we don't know what we cherish, sometimes, until we don't have it any more, and falling back on simplicities - just beautiful, Ruth.

A beautiful Golden Shovel. The lines of cherish hit me and I long for ur customary hugs and kisses to greet people

This post has taken me on a journey, Ruth. And your response poem, your golden shovel, feels perfectly at home in these times.

Gorgeous passage Ruth, I may have to find the book–I like the Greek classics they're filled with so much visual story. And such common sense goodness in your golden shovel, thanks!