Poetry Friday: Flourishing Where You Are

My OLW for the year is FLOURISHING. I posted more about that here.

Part of flourishing is being adapted to your environment. One of the things I have been loving about my environment lately has been the birds that live here. Many times recently I have thought of the words, referring to a bird, "He sings each song twice over, / lest you should think he never could recapture / that first fine careless rapture." It's such a perfect description of birdsong and how joyful and abandoned it seems to be.

I recently went and looked up the poem, and I'd kind of forgotten that the title is "Home Thoughts, From Abroad." Robert Browning wrote it from Italy, in a homesick mood. It's a time when he doesn't feel like he's really flourishing where he is.

It's easy, when you feel homesick, to romanticize the place you miss. It looks better, brighter, more welcoming, from a distance. In your mind you know that things aren't perfect there, but you'd like to be there anyway.

I have to say that the US is making it easier lately to live a long way away. Between COVID and the political situation and ... well, Wednesday ... I am quite OK staying where I am. But there are always places and people to miss. Here's the homesick Browning.

Oh, to be in England,

Now that April's there,

And whoever wakes in England

That the lowest boughs and the brushwood sheaf

Round the elm-tree bole are in tiny leaf,

While the chaffinch sings on the orchard bough

And after April, when May follows,

And the whitethroat builds, and all the swallows!

Hark, where my blossomed pear-tree in the hedge

Leans to the field and scatters on the clover

Blossoms and dewdrops -- at the bent spray's edge --

That's the wise thrush; he sings each song twice over,

Lest you should think he never could recapture

And though the fields look rough with hoary dew,

All will be gay when noontide wakes anew

The buttercups, the little children's dower 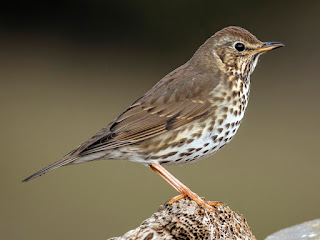 In high school I read a parody of this poem called "Home Truths from Abroad," ending with the couplet "For English spring sets men and women frowning / Despite the rhapsodies of Robert Browning." In other words, springtime in England isn't quite as idyllic as he says. It rains a lot, and it's still very cold. One time I went in the ocean at Weymouth in April, and I thought I would lose my toes, it was so cold!

Flourishing involves being where you are. Sure, you'll feel homesick sometimes; even if you've never lived anywhere else, you may long for new places. But you have to appreciate the birds and flowers -- the circumstances in general -- where you live. And I do, especially in the winter, when it's breezy and beautiful here, with lows in the upper sixties. That makes it easy to flourish.

This Browning poem is delightful as are your thoughts and reflections. And that title, just perfect for you. Enjoy your breezy, beautiful winter. I especially like this line from your post, "Flourishing involves being where you are."
Our ten day forecast is for seven days of rain and three days of clouds. But I'm excited that we'll be in the fifties for three of those days! And long-range forecasts are rarely true. So I'm holding out for an appearance from the sun at least once or twice. And I can flourish in the rain and the clouds!

I appreciate this Browning poem & your idea about flourishing in the Here & Now.
You have much to love right 'round your door, from previous images you've shared.
I love also that songbirds run through this essay.
Wishing you many lovely songs sung over this next week.

I know that first verse. Perhaps I memorized it long ago, but I love your own response to it with a nod to 'flourish', Ruth. Sometimes when I miss my home state, I think what I really miss are the good times when I was young. I love being in Colorado & always love your posts, Ruth, about Haiti. It is a very different environment than here, but you help us flourish in Haiti for a little bit each week. Thanks for the poem, missing home but also I love his images of the birds.

I love this look at "home" through the Browning poem! Having lived outside the U.S., I think I understand what you mean-- and I agree, everyone should try it. Meanwhile, thanks for joining the Poetry Friday party this week!

To me the pandemic has helped me appreciate what is around me, at home, and the trees and nature outside. Still I'm "homesick" for beauty I've seen elsewhere, which I know is sometimes exaggerated in memory.

I enjoyed the Browning poem and your response to it. It is easy to look at someplace else (whether home like homesick Browning or a distant land when you are dissatisfied at home) through rose-colored glasses and forget the thorns. I like the idea of flourishing where you are--being present.

I love this post because I have had that homesick feeling lately for the time in my life when I was a child. I can certainly drive to that place...but it's not what I'm looking for. You give me good ideas for morning pages! I've never been to England. I really hope I can get there someday. I've been watching so much British TV in this pandemic I feel like I know the place a bit. Ha!

Flourish is such a beautiful (almost edible!) word. And a wonderful word to aspire to. Flourish and bloom where you are planted, Ruth.

I've had enough of Ohio's wintery grey and would LOVE to be able to flourish with you in your warm and colorful country!

"Flourishing involves being where you are" -- wise words, Ruth. I admit to being nostalgic, like Browning, for an idealized version of the English countryside.