In my classroom today, I heard a student say to another, "No, I'm sorry, I can't come to your party because I don't get along with you."

You have to admire that kind of candor.
Posted by Ruth at 4:12 PM 3 comments:

Well, the electricity is fixed (hooray!) and I'm staying home from church with a sick child (boo!). I've been looking at the Obamameter, which is tracking which of President Obama's campaign promises he has already kept, is in the process of keeping, doesn't keep, compromises on, and so on. On day five in office, he's already kept five of his promises and fourteen are in the works. One of the ones in the works is getting his daughters a puppy. Come on, sir! Let's get moving!
Posted by Ruth at 9:13 AM 2 comments:

As usual, I am working in my classroom on this Saturday morning, trying to get caught up, plan for next week, and generally get my head together. This has been a bit of a hectic week, but I had several examples of what we as teachers always want to see - kids engaged with the material, or at least engaged by or with something.

One day this week we had some visitors to the campus and my administrator brought them in to visit my room. Not always the most risk-free thing to do when I'm teaching seventh grade, but this time it was wonderful. The kids were working in groups, everyone was on-task, and there was a low, purposeful buzz, rather than a roar of random racket. It's always fun to show off your students at their best.

Another class had a bake sale this week and it was not an unqualified success. Because of all the conflict among the kids in the class and the time we had missed already while the last brownies were sold, I threw out my plans and we brainstormed how the next bake sale could be better. The enthusiasm of the kids was good to see, and eventually most of them had stopped throwing blame and were coming up with great ideas.

In my ESL class, a simple activity where the students had to identify linking verbs and action verbs somehow engaged everyone. The kids were yelling back and forth, "AV!" and "LV!" and having earnest (and loud) arguments in their first language about which answer was best. I called it Grammar as a Combat Sport but one of the kids called it Extreme Grammar and I liked that even better. Afterwards we had a good discussion about how at times when we are emotional about or interested in what we are doing, our heart language (in their case not English) comes out of our mouths much more readily than our educational language. One of the students said that when she tells someone in her own language about an event, it feels as though the other person was there, whereas when she speaks in English there's more of a distance. Almost nobody at our school speaks English on the soccer field.

I'm about to go home, since all my lessons for next week are done and my copies are made. I have plenty of grading but I can do that at home. We are having electrical problems at home again so I probably won't be online much for the rest of the weekend and won't have the time to read today's Saturday Review of Books.

I am sure I won't be the only one to post Elizabeth Alexander's inauguration poem for today's Poetry Friday. I heard lots of complaints about it, but I think it's beautiful. Here's my favorite stanza:

And here's the rest of the poem.

Here's an article from a Minneapolis-St. Paul paper where local poets reflect on the effect of poetry at an event like the inauguration.

And I'm wondering, why have only Democratic presidents, so far, had poetry at their inaugurations? (Kennedy, Clinton twice, and now Obama.)

Tiel Aisha Ansari wrote another poem that I loved. This one is about faith.
Posted by Ruth at 5:27 AM No comments:

I missed most of the festivities the first time around, since I was teaching. As the excitement was building, I was intercepting a note which read, in part, "Who do u like?" But as soon as possible, I was online watching snippets of video. I still haven't heard Obama's whole speech but I read the text of it. And I did get to watch live as the new president and his wife walked down the street, looking relaxed and happy (and surrounded by security personnel who didn't look at all relaxed or happy).

It was an exciting day. I would love to see the enthusiasm and goodwill of today last into the months and years ahead.
Posted by Ruth at 5:14 PM 1 comment:

I just listened to a remarkable podcast. Alan Johnston, the BBC journalist who was kidnapped in Gaza in 2007, was interviewing Ingrid Betancourt, who was held for six years by Colombian radicals. Either one of these people would have been an interesting interview subject, but the combination of the two of them reflecting on their experiences and what they learned from them was amazing.

I was brought to tears several times, particularly when Betancourt talked about how important faith was for her, when they both discussed the importance of the radios they were allowed to have and the messages they heard over them, when Betancourt told of learning about the death of her father by reading a piece of newspaper with which her captors had wrapped vegetables, and then at the end when the two of them imagined a kidnap victim listening to their discussion and gave some words of hope for that person.

They came across as two gentle, reflective people, forever changed by a horrible experience, but not embittered.

Here's an article about the interview, with links where you can listen to or watch it. I highly recommend it.
Posted by Ruth at 2:42 PM 1 comment:

And Again, It's Poetry Friday

Another whole week with no post! I have to remedy this soon! Meanwhile, here's the Poetry Friday roundup.
Posted by Ruth at 4:00 PM 3 comments:

We went back to school this week. It's been a good week but a busy one, and once again I have no Poetry Friday post. But here's today's Poetry Friday roundup. 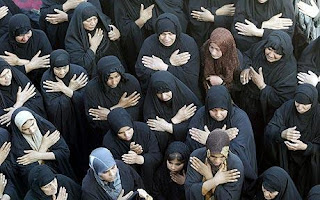 I saw the thumbnail of the picture above (a Reuters photo) on Google News and it looked like a flock of birds, as all the hands of these mourners fluttered. Here's the article about the latest suicide bombing in Baghdad. "Female suicide bomber," says the headline.

When will all the senseless killing end?
Posted by Ruth at 5:16 AM 1 comment:

Over at Semicolon there is a special edition of the Saturday Review of Books. People are linking to their reading lists from 2008. You can take a look here.

Sorry not to take the time to list every title, but I really shouldn't have even done this, since I'm supposed to be getting ready for school to start again on Monday! Most of these posts have at least a little bit of comment on the book, though some of them are just lists. I do enjoy keeping track of the books I read so that I can look back on them, and I'll be doing the same this year. I've finished one already...stay tuned...
Posted by Ruth at 9:00 AM 6 comments:

Yesterday I posted about my word for this year. It's a very simple one: LOOK. Poetry is written by people who look, people who notice the things that others walk by without taking a second glance.

I thought about this poem during our beach trip just after Christmas. The country where I live is a place in which staring is not considered rude. We had a gentleman come and sit on the beach and stare at us. We were the only people there, and he was looking right at us, so I don't think he was there for the scenery. At first I felt a bit annoyed, and then I started thinking of the opening words of the William Henry Davies poem "Leisure."

What is this life if, full of care,
We have no time to stand and stare.

No time to stand beneath the boughs
And stare as long as sheep or cows.

No time to see, when woods we pass,
Where squirrels hide their nuts in grass.


You can read the rest of the poem here.

I don't have a lot of time to stand and stare; I spend most of my days rushing around accomplishing the work on my to-do list. This year I want to take more time to pay attention. 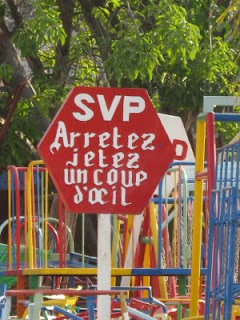 At the end of 2007 I read about choosing "One Little Word" as a focus for the new year. I had my students think about it last year (they came up with many great suggestions) and presumably I thought about it too but I don't think I ever chose one. If I did, I clearly didn't focus on it much since I don't know what it was!

This year it's time to pick a word again. My word for 2009 is LOOK. I want to remember to pay attention, to notice what's going on around me and to celebrate it, instead of constantly rushing around to take care of the next thing that needs to be done. I have a wonderful family - I need to LOOK at them and appreciate them. My children are growing up - I need to LOOK and see where they are now and realize what a gift each day with them is. I teach amazing students - I need to LOOK and see them, rather than just rushing through what we need to accomplish each day. I need to LOOK around this amazing country where I live and see what is beautiful about it.

This is the oldest of ideas, that life goes by quickly, and then is gone. We all know this, and yet we forget it day after day. This year I want to remember it. I want to LOOK.

The DP Blogs have a theme day today, as they do the first of every month. This month's theme is the best photo of 2008. You can take a look at the thumbnails here.
Posted by Ruth at 5:22 AM No comments: