My daughter and I have spent this week with my parents in Florida, since we had some time off of school for Carnival. My husband and son stayed in Haiti and did manly things. Thinking of their relationship reminded me of this bittersweet poem, which I got in my Poem-A-Day email earlier this month.

When he turns fifteen, you'll be fifty-four.
When he turns thirty, you'll be sixty-nine.
This plain arithmetic amazes more
than miracle, the constant difference more
than mere recursion of father in son.
If you reach eighty, he'll be forty-one!

Here's the rest of it.

Poetry Friday: Love, Valentine's Day, Shakespeare, and So On

I read a lot this year about anti-Valentine sentiment, or AntiValentinism, as this blog post calls it. Although I am happily married and enjoyed the roses and candy and delicious fish dinner my husband got me, I'm in sympathy with a lot of what this post says. Here's an excerpt:


"Valentine’s Day morphs otherwise proud and confident singles, into pathetic creatures that wallow in misery because Hallmark says they require a mate to find true happiness. For those satisfied with their single status, Valentine’s Day compels them to justify why. As for the coupled men; Valentine’s Day torments these masculine souls who frantically speculate, purchase, and overextend themselves in an effort to exceed their sweethearts’ {and their sweethearts’ friends} expectations. While Valentine’s Day is sold to us as a day to celebrate those we love, in reality Valentine’s Day has turned into a day where men publicly prove their undying love. Meanwhile, women in a relationship are embroiled in a bitter competition against, well, other women; posting pictures of ornate bouquets and elaborate dinner plans on Facebook prompting self-doubt in their friends who now question whether their own partner loves them. It’s really quite incredible how a holiday created to promote feelings of love and genuine caring, is actually a loaded weapon filled with unrealistic expectations, sexism, and obligation."

In addition to any of these arguments, I have another reason to loathe Valentine's Day. I teach middle school. The combination of candy, hormones, and flowers and serenades being delivered while I'm trying to teach almost sends me over the edge every year.

On the other hand, "what the world needs now is love, sweet love," don't you think so?
All kinds of love: romantic love, friendship, the love we have for our children. All of this is a gift that is definitely worth celebrating, not just on Valentine's Day, but every day. We never know how long we will have this love.

I was looking through an old textbook on my shelf, the kind you pick up in a second hand store or on someone's "Free Book" table in the halls of your graduate school. It has lots of notes in it, summing up in the margins with comments like "metaphor" or, under Samuel Coleridge's name, the dismissive "opium addict." It also has Shakespeare in it. I read Sonnet 18 with my students this week and talked about the last couplet where he says:


"So long as men can breathe, or eyes can see,
So long lives this, and this gives life to thee."

I asked the kids if they ever looked at something they had written, and thought People will be reading this as long as men can breathe or eyes can see. Yeah, me neither. But turns out, Shakespeare was right; we really are still reading his work, and there are some things that nobody has said better.

So here's a sonnet from the book, reminding me today that "Time will come and take my love away," and even though there will always be Shakespeare for consolation, I need to enjoy all the love God has given me, every single day. "Ruin hath taught me thus to ruminate."

When I have seen by Time's fell hand defaced
The rich proud cost of outworn buried age;
When sometime lofty towers I see down-razed
And brass eternal slave to mortal rage;
When I have seen the hungry ocean gain
Advantage on the kingdom of the shore,
And the firm soil win of the watery main,
Increasing store with loss and loss with store;
When I have seen such interchange of state,
Or state itself confounded to decay;
Ruin hath taught me thus to ruminate,
That Time will come and take my love away.
This thought is as a death, which cannot choose
But weep to have that which it fears to lose.

Be Kind to the Muse

A Facebook friend introduced me recently to Letters of Note: Correspondence Deserving of a Wider Audience. She particularly pointed out this letter from John Steinbeck to his son, on the occasion of his son's first romantic interest in a girl.

This week I found this post. I love Cage's awareness of what it takes for him to create. Perhaps praise and adulation may not be the best thing for him. His muse, after all, is not a horse.
Posted by Ruth at 6:01 AM 2 comments:

Poetry Friday: The Joy of Writing

I read this week about the death of Wislawa Szymborska. Even though Szymborska won the Nobel Prize in 1996, when I was old enough to be paying attention, I'm embarrassed to say that I had never heard of her until the end of last month, when Maria Horvath posted about her here. I loved this poem so much that I read it aloud to my daughter, and later to my husband. I must read more of this poet, I thought, and then the next time I saw her name, it was to find out that she had died.

Here's the poem that Maria posted:


THE JOY OF WRITING

Why does this written doe bound through these written woods?
For a drink of written water from a spring
whose surface will xerox her soft muzzle?
Why does she lift her head; does she hear something?
Perched on four slim legs borrowed from the truth,
she pricks up her ears beneath my fingertips.
Silence — this word also rustles across the page
and parts the boughs
that have sprouted from the word “woods.”

Lying in wait, set to pounce on the blank page,
are letters up to no good,
clutches of clauses so subordinate
they’ll never let her get away.

Each drop of ink contains a fair supply
of hunters, equipped with squinting eyes behind their sights,
prepared to swarm the sloping pen at any moment,
surround the doe, and slowly aim their guns.

They forget that what’s here isn’t life.
Other laws, black on white, obtain.
The twinkling of an eye will take as long as I say,
and will, if I wish, divide into tiny eternities,
full of bullets stopped in mid-flight.
Not a thing will ever happen unless I say so.
Without my blessing, not a leaf will fall,
not a blade of grass will bend beneath that little hoof’s full stop.

Is there then a world
where I rule absolutely on fate?
A time I bind with chains of signs?
An existence become endless at my bidding?

The joy of writing.
The power of preserving.
Revenge of a mortal hand.

It's true that when you're writing you can feel all-powerful. And when you're reading, that written world, "borrowed from the truth," can seem every bit as real as the actual world, all around you. Those "clutches of clauses" that Szymborska manipulated will continue to give pleasure, as long as her words are read.

The Poetry Friday roundup is here. Since Laura has it up already, I'm going to go ahead and post my Poetry Friday offering on Thursday night.
Posted by Ruth at 6:18 PM 7 comments:

I messed up so many details today. I flaked out on paperwork I had promised to have finished, got days wrong on my schedule and caused problems with another teacher's plans as a result, and flubbed the organizing of an upcoming activity with my homeroom. As if all that wasn't enough to make me feel incompetent, a student fainted - twice. At least I had an excellent nurse nearby, and all was well. 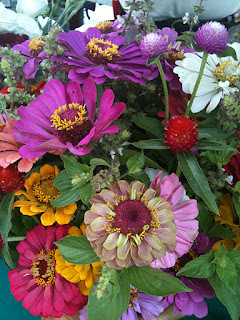 February seems a good time to think about flowers. Where I live, they grow all the time, but in the north you can now only find them at the florist's. Browning, missing England from India, wrote about delicate, polite buttercups, calling them "Far brighter than this gaudy melon-flower!" But I kind of have a thing for gaudy, at least when it comes to flowers.

A "high prole" flower, says Fussell's book on American
class, the aristocrat wouldn't touch them, says Cooper
on class in England. So unguardedly, unthriftily,
do they open up and show themselves that subtlety,
rarity, nuance, are almost put to shame.

In any careless combination they delight.
Pure peach-cheek beside the red of a boiled beet
by the perky scarlet of a cardinal by flamingo pink
by sunsink orange by yellow from a hundred buttercups
by bleached linen white. Any random armful
of the world, one comes to feel, would fit together.


You can read the whole poem here. It has lots more about how great zinnias are, how "tough" and "stubborn" they are, and about the poet's grandmother, who had "big, clumsy-looking hands."

I wrote a poem myself about daffodils and their lack of subtlety. Here it is:

The daffodils take a risk each year
As they burst out in all their gaudy glory.
It would make much more sense
To wait underground a little longer.
After all, it's probably going to snow again.
And even if it doesn't
They aren't going to be around more than a few weeks.

Still, the daffodils don't seem to mind.
They are yellow but fearless.
They don't try to tone themselves down,
To dress in brown or some more practical color,
To camouflage their joy just in case,
To kill time until they are sure the weather will be favorable.
Instead, they are simply beautiful while they can be.

If daffodils think of the future at all
It's a long-term one,
The resurrection of next spring
When the dead bulbs,
Rooted and established in the earth,
Will come to life again
And again, freely,
Careless of their own safety or dignity,
They will give themselves away.

Here's to unsubtle, "high prole" flowers. I love them all. I love how bright and happy they are, the splashes of color they provide. I love the way they can get away with wild combinations that I'd never dare to wear. They inspire me to be who I am, without worrying so much about what people think.

And speaking of flowers, today's Poetry Friday roundup is at The Iris Chronicles. 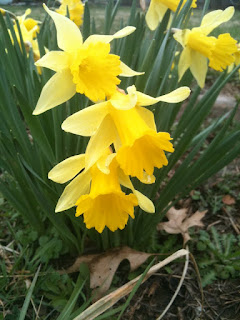 Today's Daily Photo Blog theme (the first of each month is their Theme Day) is Animals. You can see thumbnails of participants' photos here.
Posted by Ruth at 1:30 PM No comments: