I missed a whole month of Poetry Fridays!  I am back home now, ready to enjoy the last few days of summer before I go back to work.  The summer did not go exactly as I had imagined.  For one thing, I had a rather unpleasant experience about which I wrote two poems.  The first one was called "Biopsy," but thankfully the second was called "I Don't Have Cancer Day."

I'm not going to share those poems today, but I did want to share an original one.  I wrote this one several years ago, but the friend who had told me the story felt shy about me posting it.  This summer the same friend had an encounter with a raccoon, and that got us talking about the earlier encounter and the poem, and I ended up getting his permission to make the poem public.  I'm glad, because I very much enjoyed writing this one, and I hope my PF buddies like it too.

(By the way, writers, how do you deal with this?  A lot of my poems are written for someone.  In cases like that, I always feel I need the person's permission to share the piece, even if it's a less, well, intimate subject than this one.  Do you feel the same?  Or are you more of the Anne Lamott persuasion, that whatever you experience or hear about is fair game for your writing?   Anne says, “You own everything that happened to you. Tell your stories. If people wanted you to write warmly about them, they should have behaved better.”  Well, this one isn't about bad behavior, and it didn't exactly happen to me, but I am still curious to know your experiences with this aspect of writing, if you'd like to share in the comments.) 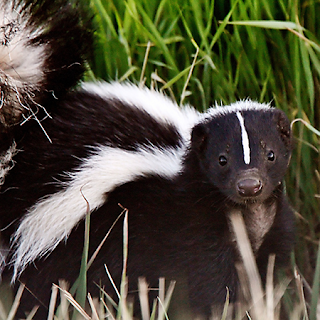 The black and white unwelcome visitor
Poked around on the back porch,
And got up on hind legs to peer in the door.

Internet research turned up some useful information:
Pee repels skunks.
So Paul, early morning groggy,
Staggered out back
To do the necessary.

At first he felt self-conscious;
What if neighbors were watching?
But when he started to pee with a purpose,
He couldn't help enjoying it,
Outside, in the morning,
In the chilly September air.

He had plenty of pee,
So he kept on going and going,
Feeling free and like a kid again.
The word "whizzing" came to mind
And he wondered when he'd last used that one.
He thought about traveling as a boy,
A twelve-hour trip with no rest stops except bushes.
He thought about camping trips in the woods.
He thought about winter and yellow snow.

He felt briefly invincible
Summoning the mighty powers of pee,
Considered making the rounds of the neighborhood,
Ensuring a skunk-free environment for all.
But then he remembered his age and
Position in the community
And went back indoors instead.

The black and white unwelcome visitor
Only stayed briefly the next time
Before ambling off;
Was it the pee that repelled the skunk?
Paul likes to think so.

(By the way, as though to remind me that I am home in Haiti, there was a long time between the beginning of this post and the end.  Our backup batteries died, and I had to wait to get the generator going.  It's going now, and I'm going to publish...)
Posted by Ruth at 6:20 AM 4 comments:

This has turned out to be a more eventful summer than anticipated.  Here are the links to the last two Poetry Friday roundups.  I'll be back posting regularly soon.

Hope you're having a good summer!
Posted by Ruth at 12:39 PM No comments:

I completely missed that yesterday was Friday.  Such is a teacher's summer.  Here is yesterday's roundup, since apparently some people knew what day it was.
Posted by Ruth at 12:57 PM No comments: