Here are the lyrics:

I'm thinking about gardens this year, but I decided it's time to acknowledge, on behalf of my northern friends who keep posting snow photos, that many gardens are dormant right now.  I don't have the mind of winter; I'm a tropical girl all the way.  But when I read this poem, and imagine having been cold a long time, I think I start to see what Wallace Stevens means.  At least a little bit.

One must have a mind of winter
To regard the frost and the boughs
Of the pine-trees crusted with snow;

And have been cold a long time
To behold the junipers shagged with ice,
The spruces rough in the distant glitter

For the listener, who listens in the snow,
And, nothing himself, beholds
Nothing that is not there and the nothing that is.

Book #1 of the year was The Kingmaker's Daughter, by Philippa Gregory.  I don't get into these Wars of the Roses books as much as I do the Tudor ones, mostly because I am far more familiar with the Tudor history.  But this was worth reading.

Book #2 was a book I've been wanting to read ever since I saw that it had come out: Amy Wilentz's Farewell, Fred Voodoo.  I enjoy Wilentz's writing about Haiti; she loves this country, and her writing style is colorful and evocative, full of telling details.  Her most famous book is The Rainy Season, which came out in 1990.  I read it before I came to Haiti for the first time.  She has written countless articles on this country.  Her blog is always worth reading.  In this book she is less confident; she seems to be floundering, trying, like all of us, to come up with ways to live with the fact of the earthquake and its aftermath.  She questions everyone's motives (her own too, in powerful passages), and sometimes this got to be too much for me.  I found myself alternately sad, angry, and defensive.  She spends a lot of time trying to figure out what draws outsiders to Haiti and what holds them here.  I think all of us foreigners who live here do the same.  I can't argue with lots of her conclusions, but I couldn't stomach her suggestion that aid workers were gleeful to find out about cholera, because they could stay longer in their fancy Port-au-Prince digs: "it sounded breathless, almost eager: beyond the sadness of 'tragedy upon tragedy' is the possibility of more funding for aid organizations, more jobs, longer stays in this fascinating, troubled place - in nice new apartments, driving those big, air-conditioned Land Rovers.  It's not as if humanitarian workers are in the business for the big cars and nice apartments, but the sweet stuff comes with the territory, and the crisis caravan is used to it."  She seems obsessed with Sean Penn, and keeps coming back to him and what he's actually doing in Haiti.  She admits (rather grudgingly) that he has achieved a lot.  It's typical for journalists to be critical of those they write about, but I kept wondering, as she almost mockingly described one effort after another: what are they supposed to do, then?  (She doesn't know, she admits in a couple of places.  And honestly, nobody does.)  She says that people who complain about the corruption of the Haitian government are at least partly motivated by racism, but then in the next breath, gives examples of the corruption.  She is absolutely right that change has to come from within, not imposed by outsiders.  I found this book pretty painful to read, but probably much of that was the state I am in rather than anything wrong with the book itself.  The fourth anniversary of the quake rolled around last week, and I am less capable than ever of summing it all up, figuring it all out.  Wilentz feels the same, to a certain degree, and I think the best writing in this book is in the sections where she admits just how overwhelming it all is.
Posted by Ruth at 12:50 PM No comments:

Four years ago yesterday, I left Haiti for the United States, five days after the earthquake.  I blogged back then about all the reasons we made the decision, and about my guilt over leaving Haiti when there was so much need for help.  But that was what happened: my husband stayed and did relief work, and I left with the children.

A few weeks after arriving in the United States, I got a phone call from a doctor friend who had also left Haiti after the earthquake, after working around the clock for days and days with no rest.  He was going back, but meanwhile he wanted to see how I was.  He and his family were going through this for the second time; they had left Rwanda during the genocide, expecting to return to their home in a month.  They never went back.  He started talking about packing his bag to leave Rwanda, and how he had packed underwear and socks, and later wished so much he had packed things that mattered, instead.

Later, my own experience and that conversation turned into this poem.


How to Pack an Evacuation Bag

So you're going to be evacuated in eight hours
And you can just take one small bag.

Don't worry about a toothbrush -
You can buy one of those on the other side.
But you'll need the bracelets you like to wear
And your kids' baby pictures.

Don't pack underwear and socks -
They have those where you're going.
Instead, take the vaccination records
And the birth certificates and passports
And all the proof that you exist.
Because believe me, you're going to feel as though you don't.

And let me tell you what you're really going to need during the months of exile:
The smell of garlic
The way the sun feels on your back
The sounds of generators and roosters and kompa music
The taste of sos pwa
And your husband's kiss.

But I forgot;
You can just take one small bag.

Four years ago today, an earthquake changed my life, and the lives of millions of others.  It ended the lives of many thousands.  On this anniversary, the depth of the pain takes me a little bit by surprise, given how much we have all moved on.  I go days without thinking of the earthquake now.  But although the literal aftershocks stopped long ago, the metaphorical ones continue.

Dear Haiti, we will never forget. 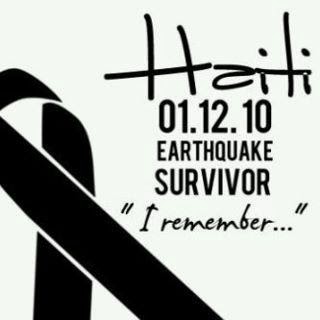 I love the particularity of this poem by John Montague, in which he remembers the two gardens of his childhood, gardens of which he was the "small guardian."  One was a flower garden, and the other a vegetable garden: "the front for beauty, the back for use."  This poem captures so many small details that I feel as though I can wander through these gardens with him in his memory.


We had two gardens.


A real flower garden
overhanging the road
(our miniature Babylon).
Paths which I helped
to lay with Aunt Winifred,
riprapped with pebbles;
shards of painted delph;
an old potato boiler;
a blackened metal pot,
now bright with petals.
You can read the rest here. And you can see today's roundup here.
Posted by Ruth at 7:46 AM 5 comments:

I have some free time on Tuesday mornings, which usually is great, but today, as I wait to see my kids for the first time since their Christmas break, I am at loose ends and strangely nervous.  I started thinking about this passage in The Wednesday Wars, by Gary Schmidt, a book I read with my seventh graders back in the fall.  A seventh grader is speaking about his teacher and their class:

"It was early spring and we were her garden, and she was starting to see the bulbs and seeds that she had planted in us last fall coming up.  She raked away our dead leaves, spaded new soil around us, and watered and fertilized.  And we grew fast and green, let me tell you."

I'm ready to get back to the gardening!
Posted by Ruth at 5:53 AM 2 comments:

The fourth stanza of this poem is very familiar, since it appears on many garden signs. I found this one on Ebay. 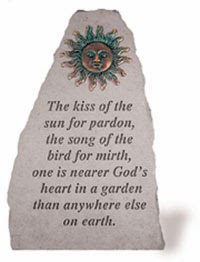 I'm not sure, though, that I had ever read the rest of the poem.  I found out that Dorothy Frances Gurney wrote this originally in a guest book, after she had enjoyed a stay with a friend who had a beautiful garden.  In fact, it was this garden, Penshurst Place in Kent.  Having a garden like that requires rather a large staff!

This may seem a bit of an inappropriate poem for this time of year, but here in Haiti where I live it is still beautiful weather, though a bit chilly right now, at 75 degrees.  It is supposed to get up to 93 later today.  (Do I sound smug?  Sorry.  I just can't help it sometimes.)  I don't have to go back to work until Monday, so I'm savoring these last few days and a little more ease for the soul.

THE Lord God planted a garden
In the first white days of the world,
And He set there an angel warden
In a garment of light enfurled.

So near to the peace of Heaven,
That the hawk might nest with the wren,
For there in the cool of the even
God walked with the first of men.

And I dream that these garden-closes
With their shade and their sun-flecked sod
And their lilies and bowers of roses,
Were laid by the hand of God.

The kiss of the sun for pardon,
The song of the birds for mirth,--
One is nearer God's heart in a garden
Than anywhere else on earth.

For He broke it for us in a garden
Under the olive-trees
Where the angel of strength was the warden
And the soul of the world found ease.

The roundup is here today. Enjoy the first Poetry Friday of the year!
Posted by Ruth at 5:55 AM 6 comments:

I just read that the new Ambassador for Young People's Literature has been named.  It's Kate DiCamillo.  Here is some more information about her, and here you can see my post about attending a panel discussion including all three of the previous ambassadors.
Posted by Ruth at 6:19 AM No comments: