Amy Wilentz on Writing about People

Amy Wilentz wrote a wonderful essay on how to make people come alive for your readers. She begins:


When you write nonfiction characters, you have to be vigilant and observant (this leads to good fiction writing, as well). People consist, for other people, of four things: what they look like, where they are, what they say, and what they do. Ask any actor. It’s all about: costume; setting; dialogue, and movement or action.

Here's the rest:  here.  I particularly enjoyed her observations on how you have to love your character, at least a little bit.
Posted by Ruth at 7:54 AM 2 comments:

Poetry Friday: Sonnet for my Sub

Sonnet for my Sub

I'm writing down the mysteries of my class
All that I do, and why and how and when
The intricacies of a bathroom pass
Which students you can trust (but even then
You must be on your guard, and watch your back),
And here is the procedure for the roll
And don't let those kids get you off the track,
Make sure you let them think you're in control.

Sub, I've tried to give you foolproof lessons,
Easy instructions, here's how to be me,
And yet I'm (this is such a lame confession)
Not thrilled by interchangeability.

I wish my absence filled the world with sorrow
But failing that, please teach my class tomorrow.


When my middle school students write love poems, they very rarely tell the truth of their lives, the awkward crushes they have on the goofy kid in the next seat, the way they are starting to feel drawn to other people and how lovely and painful and sweet and terrible it is.  Instead, they write about Love with a capital L, informed by movies and imagination and the music they listen to (just as they write about Life with a capital L in all their wisdom gained in thirteen years on this planet).  I often ask them, what makes this person special?

Craig Arnold said of this poem, "With 'Bird-Understander' I wanted to say not, as an Elizabethan courtly sonneteer might have said, 'Look, I made your words into poetry, aren’t I fabulous?' but rather 'Listen, what you said to me, it’s already poetry, better than anything I could write, and it would make me happy simply to have you see that.'"

A love poem should be specific, not a generic verse suitable for a greeting card.  The beloved is not interchangeable with others, and poetry about the beloved shouldn't be, either.  By that standard, this love poem succeeds brilliantly.  When we read it, as people who don't know the woman being addressed, we see a beautiful quality in her, and we see why he loves her.  We know what makes her special.

Of many reasons I love you here is one

it makes you terribly terribly sad

but you are wrong

Arnold's comments about the poem come from this article.

And here's today's Poetry Friday roundup.
Posted by Ruth at 2:00 AM 10 comments:

This year has started off well in the reading department, as I've found some interesting and thought-provoking books.

Book #1 of 2013 was a novel, which I read most of in the waiting room at the US Embassy during a passport-renewal visit.  It was Sirena, by Donna Jo Napoli. Sirena is a mermaid, and her story is a retelling of one of the tales from the Trojan War myth (I won't tell you which one, as it's not instantly obvious). She's also one of the Sirens described in the Odyssey. While this was absorbing and fit the waiting-room bill, it was also a bit forgettable.

Book #2 was a lot more serious.  I downloaded it for free onto my Kindle in a special offer, and I was glad that I had.  The book was  Letters from a Skeptic: A Son Wrestles with his Father's Questions about Christianity. As the title suggests, this is a series of letters between Greg Boyd and his father in which many questions about the plausibility of Christianity and the Bible are asked and answered. Boyd has a very simple, readable style, with an underpinning of complex philosophy and theology. I thoroughly enjoyed this and would recommend it to anyone who is interested in Christianity, either for someone examining it from outside or for a Christian looking for clearer understanding of its issues.

Book #3 was Elizabeth and her German Garden, by Elizabeth von Arnim. I was interested in this book because of reading this article, part of a series on NPR where people tell about their favorite book.  Originally published in 1898, the book is a bit hard to categorize.  Elizabeth rhapsodizes about her garden and her introverted pleasure in hanging out there with a book, tells cute stories about her children, complains about having guests, and pokes fun at her husband, whom she calls "The Man of Wrath."  I couldn't always tell when she was being satirical and when she was serious, but I did find her story interesting and entertaining.

Book #4 was a Ken Follett novel, Lie Down with Lions, part of a pile of books passed on by someone who was leaving the country. The story, which is about Afghanistan, kept my attention, and I enjoyed reading about childbirth as Jane delivered her baby with an Afghan midwife and then breastfeeding as she rushed about the country with the baby nursing the whole way. I always enjoy books where breastfeeding is portrayed naturally, but I did get a little impatient with Follett's male fantasies about it. And I feel I have to warn my readers about a way too long, way too detailed sex scene midway through the book. TMI, Mr. Follett!

Book #5 was Kent Annan's book about the Haitian earthquake, After Shock: Searching for Honest Faith When Your World is Shaken. Although I bought a couple of copies of this book in 2011, one for my husband and one for a friend, it was only now that I felt ready to read it, and I'm very glad I did. Many books are coming out now about the earthquake, after three years of reflection, but this one was written in the heat of the moment, and it has a raw, honest quality that spoke to me deeply. There were plenty of passages that I felt I myself could have written. I related so much to Annan's struggles to understand what happened on January 12th 2010 and in the aftermath, and I appreciated his refusal to tie it all up in a neat little package. He writes about the way crisis does kill our faith, and then a new version is resurrected, informed and refined by what we have experienced, and full of a new awareness of God's love.  I have written here before about listening to Kent Annan on the radio when I was in the United States after the earthquake (here and here). I so much appreciated the way he spoke about Haitians then, not as helpless victims, but as courageous people who stepped in and helped one another. His observations then resonated with my own experiences with Haitians; he was saying things I wasn't hearing from others at that time. I will be looking for more of his books.

Book #6 is one that many of my blog friends have been reading. The book is Quiet: The Power of Introverts in a World that Can't Stop Talking, by Susan Cain.   Bridget read it and Janet read it, and then I bought it for my daughter and read it myself. I just finished it yesterday and am still thinking through the implications, but this was an important book for me, and helped me understand my own temperament and the way I function in the world. I liked Cain's focus on how people of different personality types can work together and complement one another, and also the way she discussed how knowing yourself can help you to design your life in a way that helps you be most productive and happy. I liked this book much more than I expected to, and found it full of rich ideas.
Posted by Ruth at 1:04 PM 1 comment:

I read Garrison Keillor's 77 Love Sonnets last summer, and enjoyed the book immensely. Garrison Keillor does so much through his Writer's Almanac to disseminate great poetry, new and old, and I've enjoyed his anthologies, also. It was fun to read his own poetry. Here's a favorite, dealing with Ulysses and Penelope, whose story I love. 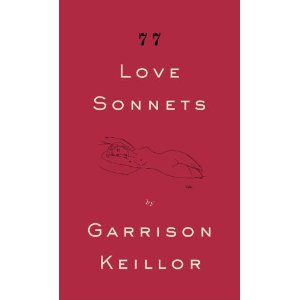 Here by the enormous swimming pool at the Biltmore
Twenty-six young dark-skinned women lie
In tiny bikinis like mermaids on the shore,
And I, bound for Ithaca, just sail on by,
Heading for you, Penelope, to tell the tale,
How that whole Trojan War gave me the willies,
The pointlessness of it, and I set sail,
Having paid off Homer and left Achilles
In his tent, and was lucky to get a favorable wind
And stopped here at the Biltmore to recompute
My course, and found twenty-six dark-skinned
Women, their breasts displayed like fresh fruit.
Thanks but no thanks.  They only want a tan.
You, dear, love a good story.  I'm your man.


Here's more on Penelope from past Poetry Fridays.

I didn't do a Poetry Friday post yesterday - the first time for that in a long while. Teaching, and life, have been taking my energies more than usually, but if anyone's looking for a poetry post, I apologize and direct you here, to yesterday's roundup. I hope to be back next week, and maybe even with a post in between Fridays!
Posted by Ruth at 12:53 PM 1 comment: