I read a poem with my students called "Folding Sheets," by Madge Piercy.  (Here it is.)  Afterward we talked about activities that make us think of certain people.  Piercy's poem includes lots of sensory details, so we talked about those, too.  I challenged the students to write a poem that recounted a memory of doing something with someone, and in the course of the description, revealed a person and a relationship.

Then I decided to try it myself.

The poem was a lot different from the way I was planning in my head (a fact which became part of my minilesson).  I decided to write about going to church.  There was a period when I was a child when my family attended a church in Swahili.  Though we had lived in Kenya for a while, we lived in an English-speaking enclave, since my parents worked in education, and all education in Kenya was in English.  Our vocabularies contained some Swahili words, and my parents had studied the language, but my brothers and I couldn't understand enough to follow what was going on.  That was the church experience I decided to write about.

I started by brainstorming. 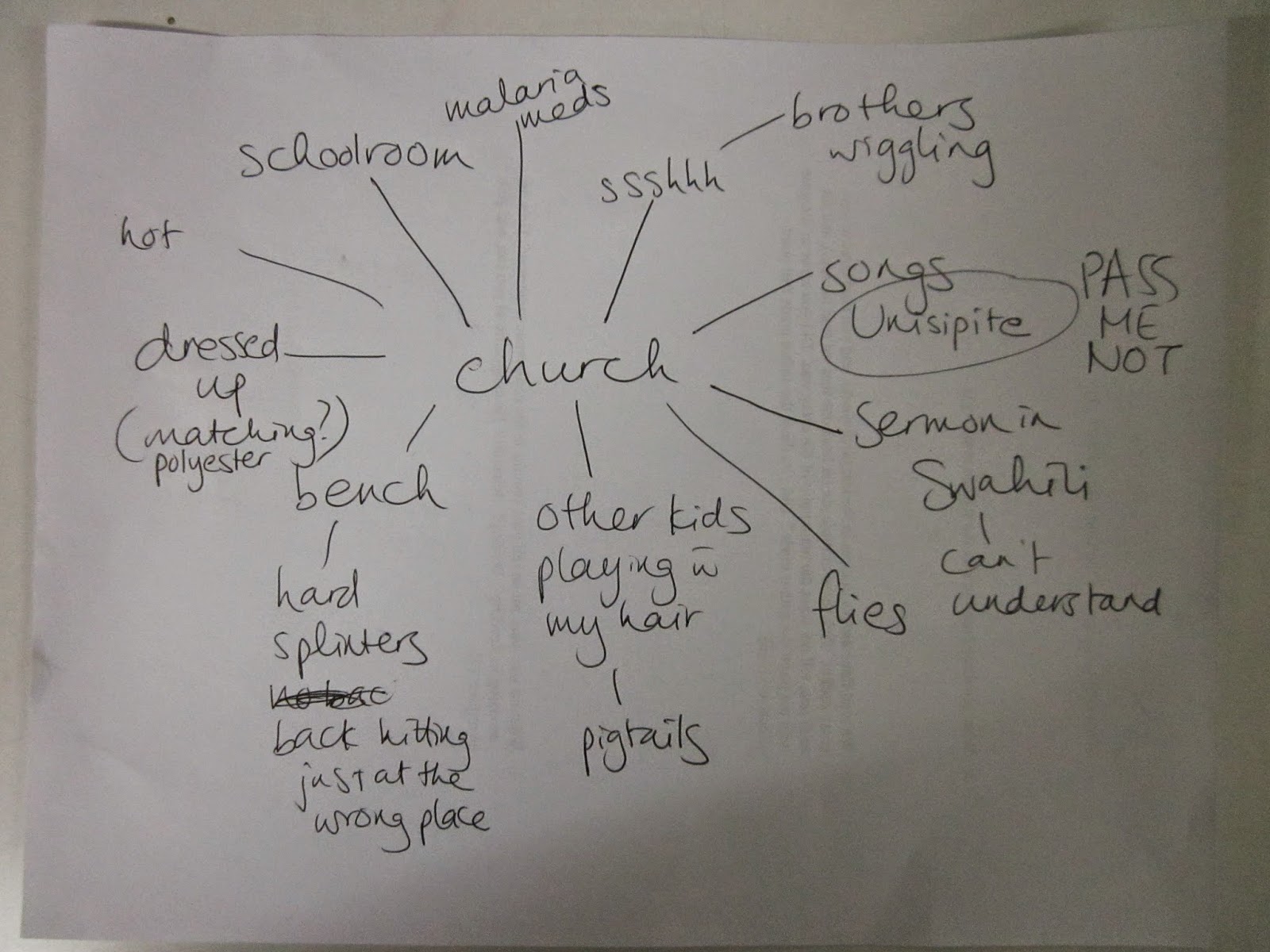 Not all these details wound up in the poem, but I worked hard to remember exactly how it felt to be in that place at that time.

Next, I tried a first draft. 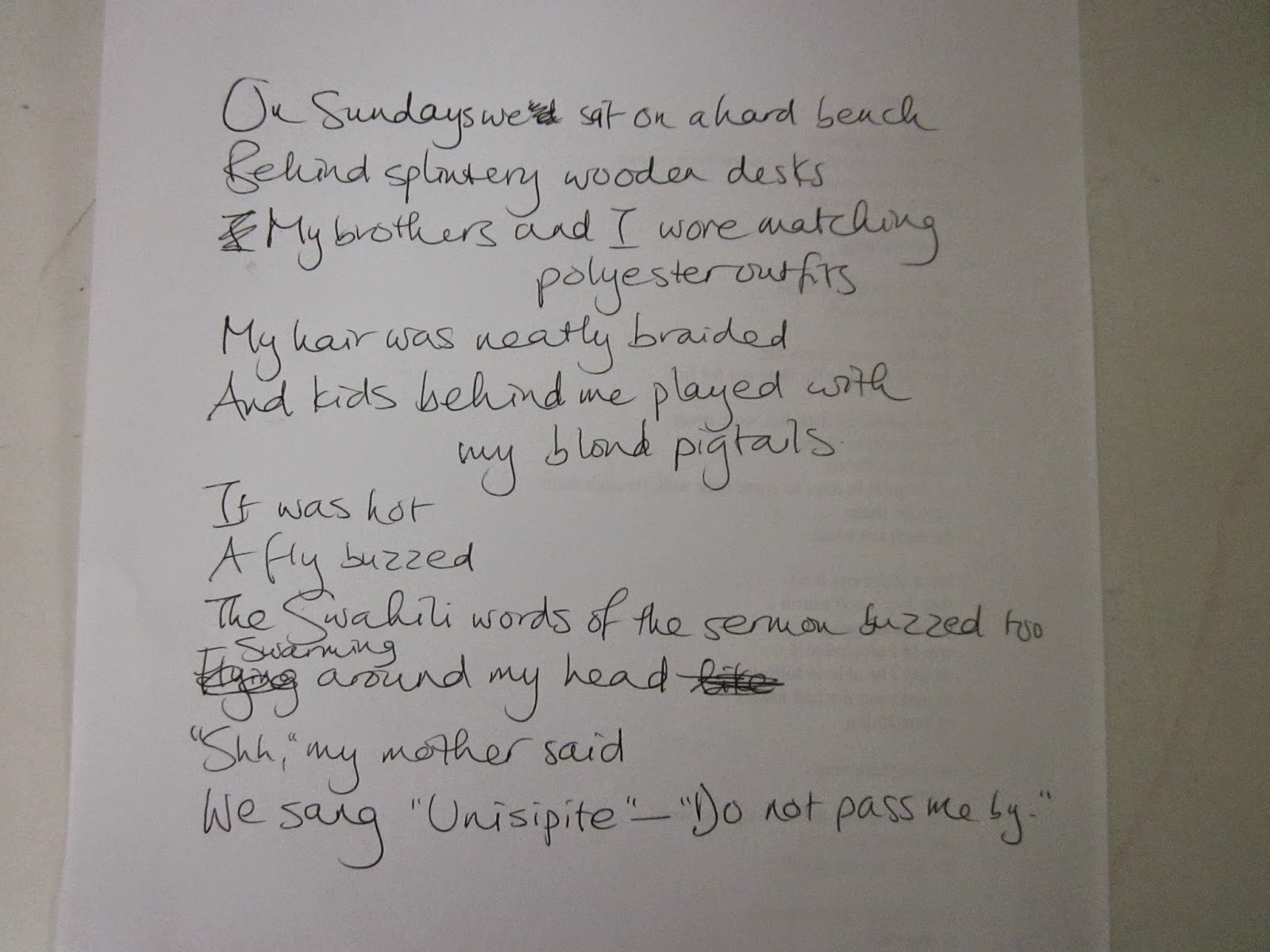 I found that I wasn't really focusing on my parents, whom I had intended to write about.  (You can see my mother saying "Shh" in the first draft, though.)  Instead, I kept thinking about a song we used to sing.  In English, the song is "Pass Me Not."  You can see that I had already remembered it in my brainstorming.  It was "Unisipite" there, and it was "Unisipite" in my first draft, but actually it's called "Usinipite."  I had remembered it wrong, a fact I learned when I talked to my brothers.

Because that was my next step: research.  I told my students that we think about research when we're writing something informational, but that I often do research for all kinds of writing.  In this case, it involved talking to my brothers (we had an extensive Facebook chat sharing our memories).  It also involved looking up "Usinipite" on YouTube and finding this fascinating video:

I watched this video off and on for the rest of the afternoon.  Not only was that the song (jazzed up slightly in this version), but LOOK at that white tie!  It could be the seventies again.

I decided I wanted to focus on that song, and so I continued researching by looking up the lyrics and downloading Lyle Lovett's version (unfortunately I couldn't find a video of him singing it).

I thought more and more about that song, and how I was asking God, in Swahili, which I didn't even understand (we used to call the song "Unispite"), to minister to me, too, and not pass me by.  And I thought about how God did that, and how my childhood faith, instead of being stifled by those hours in church, was actually strengthened.

I'm not completely happy yet with the poem that resulted, but I shared it with my students anyway, as well as the process I went through: prewriting,  researching my own past, marinating the ideas for days, shifting the focus from my original intention.  Here it is:

Sunday morning found my family in a schoolroom for worship.
Dressed in our matching polyester outfits, my brothers and I
Sat at splintery, grafitti-ed wooden desks.
My hair was neatly braided
And the kids behind us pulled my blond pigtails.
It was hot.
A fly buzzed.
The Swahili words of the sermon buzzed too,
Swarming around our heads
As we wiggled
And our parents hushed us.

We sang Usinipite
Which we gigglingly called Unispite.
“Pass me not, O gentle Savior,”
Say Fanny Crosby’s English words, which I didn’t know at the time:
“Savior, savior,
Hear my earnest cry;
While on others thou art calling,
Do not pass me by.”
And somehow
He did call on me too.
And through the heat and the buzzing and the splinters and the wiggling
He passed me not.

It's been a while since I have posted what I've been reading.  Here's the latest:

Book #36 of 2014 was Longbourn, by Jo Baker.  I've written before that I have a weakness for Jane Austen sequels, retellings, and knockoffs of all kinds.  I check them out of the library and even buy them, and am nearly always disappointed.  Not this time.  Baker is a wonderful writer in her own right, and is not just attempting imitation Austen.  This story has the same characters as Pride and Prejudice, but it's told from the point of view of the servants, who, as you might imagine, see things rather differently.  You'll never think of Elizabeth Bennet's six inches of muddy petticoat the same way after you have read the chapter devoted to doing laundry at Longbourn.  Austen is often criticized for ignoring the fact that her country was at war, but Baker doesn't ignore it at all (in fact, the war section got a little long and graphic for me).  The story is satisfying and thought-provoking, and also beautifully written.  Highly recommended for Austen fans.

Book #37 was Jane Yolen's Pay the Piper: A Rock 'n' Roll Fairy Tale, which she wrote with her son Adam Stemple.  This is inspired by the story of the Pied Piper of Hamelin.  Creepy!

Book #38 was another Trollope title, The Small House at Allington.

Book #39 was a reread, The Mystery of Marriage, by Mike Mason.  My husband and I read this around the time of our wedding (I can't remember if it was before or after).  This time I read it aloud to him, and we both enjoyed it and found much to talk about.  This isn't a perfect book about marriage, but it is poetically written and beautiful.  It's not a how-to book, but more a meditation on marriage.

Book #40 was The Testing, Book #41 was Independent Study, and Book #43 was Graduation Day, all by Joelle Charbonneau.  I bought this trilogy for my classroom, and it's being eagerly devoured now by fans of the Hunger Games books and other dystopic fiction.

Book #42 was Chasing Vermeer, by Blue Balliett.  I read this aloud to my eleven-year-old when he was sick, and we both thoroughly enjoyed it.  It's got art, mystery, secret codes, interesting characters, and lots of information.

Book #44 was Invitation to Tears: A Guide to Grieving Well, by Jonalyn Fincher and Aubrie Hills.  This was a quick and very helpful read, with implications for all kinds of loss and grieving.  I am also thoroughly enjoying the podcasts that the authors have been doing in their "read-along."  (You can find links at that post to all the podcasts.)

Book #45 was The Good Wife, by Elizabeth Buchan, a novel about a political wife in England.  It was mildly entertaining, if a bit forgettable.

Book #46 was not forgettable at all.  It was clever, brilliantly plotted, and mysterious, and I can't tell you a thing about it without giving the whole thing away.  It was We Were Liars, by E. Lockhart.

Book #47 was The Private Lives of the Impressionists, by Sue Roe.  I read this because of my fascination with the National Gallery exhibit about Edgar Degas and Mary Cassatt, which I had the privilege of seeing over the summer.  This book is so good; it reads like a novel, and it opened up the paintings for me.  Highly recommended.

Book #48 was Middle School is Worse than Meatloaf: A Year Told Through Stuff, by Jennifer Holm.  I got this for my classroom, and I think it will entertain my students.

Book #49 was Later, Gator, by Laurence Yep.  My son picked this one and read it aloud to me.  I'm surprised to find that it may be out of print.

Here's my last Reading Update post, which includes links to the others from 2014.  Looks like I'll reach my goal of 52 books this year!

I was looking for something recently and happened on this poem.  I clicked on it because I thought about my own yellow dress poem.  But this one couldn't be more different from mine.  And of course my eye was caught by the italicized "Port-au-Prince" at the beginning.

I like to focus on positive aspects of my adopted country, but I have to share this poem because it represents a common scenario for me - and by that I do not mean that I see this kind of sight frequently, but that I often see sights I can't explain, from a moving car.  I catch a glimpse of a moment in someone's life, and then it's gone, and I will never have the context for it or understand it.  I've written down many glimpses like that in my "Writing Ideas" file, and some I've turned into poems (like the one I shared in this post).  Here, Amy Beeder reflects on one of these moments.

Girl on a heap of street sweepings high
as a pyre, laid on snarled wire & dented rim.
Girl set down among the wrung-out hides.
A girl who was coming from church. It is late
Sunday afternoon. Was it a seizure? Is it
destiny or bad luck we should fear? Weak heart
or swerving taxi? In Tet Bef by the dirty ocean
thousands crush past her without pausing
at the shrine of her spayed limbs; brilliance
like the flesh of lilies sprouting from the pummeled cane.
Is it possible to be lighthearted, hours later?
Days? To forget the yellow dress?
I am waiting for her mother to find her, still
wearing one white spotless glove (where is the other?),
my idle taxi level with her unbruised arm,
her fingers just curling like petals of a fallen flower
and how did it end?

You can read the rest, and hear it read, here.

I'm doing parent/teacher conferences today, so while I'm talking to parents about their kids' progress, here's Naomi Shihab Nye talking about teaching poetry, and how it's not about measuring, but about love.  Watch it; it's so good.

Here is a story
to break your heart.
Are you willing?
This winter
the loons came to our harbor
and died, one by one,
of nothing we could see.