My daughter made me a lemon cake for my birthday this week, so in honor of that perfect cake, I present Pablo Neruda on the lemon. 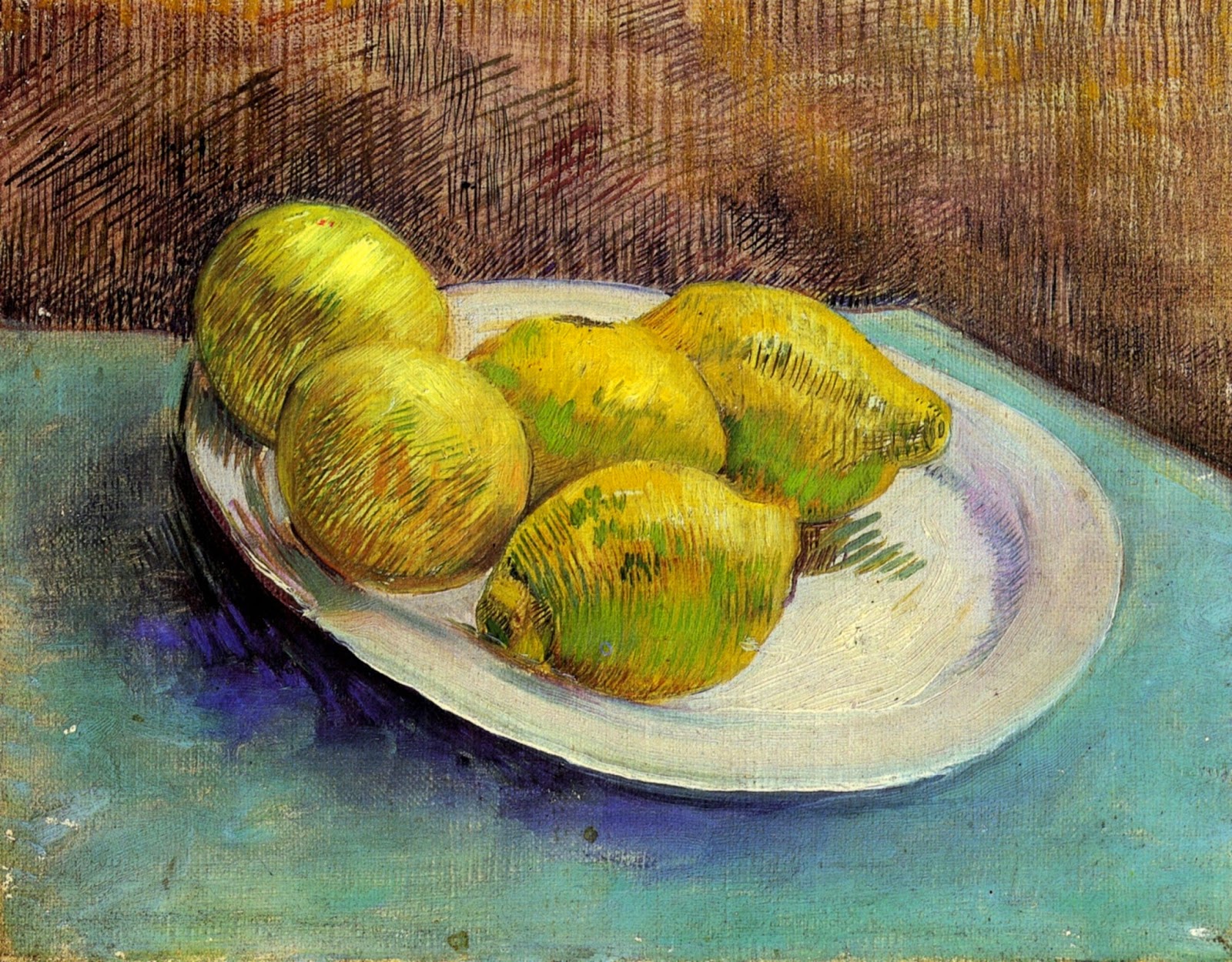 Out of lemon flowers
loosed
on the moonlight, love's
lashed and insatiable
essences,
sodden with fragrance,
the lemon tree's yellow
emerges,
the lemons
move down
from the tree's planetarium

Delicate merchandise!
The harbors are big with it-
bazaars
for the light and the
barbarous gold.
We open
the halves
of a miracle,
and a clotting of acids
brims
into the starry
divisions:
creation's
original juices,
irreducible, changeless,
alive:
so the freshness lives on
in a lemon,
in the sweet-smelling house of the rind,
the proportions, arcane and acerb.

Cutting the lemon
the knife
leaves a little cathedral:
alcoves unguessed by the eye
that open acidulous glass
to the light; topazes
riding the droplets,
altars,
aromatic facades.

So, while the hand
holds the cut of the lemon,
half a world
on a trencher,
the gold of the universe
wells
to your touch:
a cup yellow
with miracles,
a breast and a nipple
perfuming the earth;
a flashing made fruitage,
the diminutive fire of a planet.

A friend posted this on Facebook for Ash Wednesday this past week.  It was appropriate for the strange week I had.  We had the week off for Carnival, and then early Tuesday morning there was a horrible accident that resulted in the rest of the festivities being cancelled.  Instead of celebration, the government called for three days of mourning for the sixteen who died.  Yesterday, I spent the day with pregnant women, observing prenatal care, teaching on breastfeeding - thinking about beginnings.  And of course, through the whole week, I watched the international news, horrified by brutality and suffering.  "This day - like none other you have ever given, or we have ever received."  Yes, every day is unpredictable, often overwhelming.  We are marked by ashes, and yet there is also hope.

Marked by Ashes
by Walter Brueggemann

Ruler of the Night, Guarantor of the day . . .
This day — a gift from you.
This day — like none other you have ever given, or we have ever received.
This Wednesday dazzles us with gift and newness and possibility.
This Wednesday burdens us with the tasks of the day, for we are already halfway home
halfway back to committees and memos,
halfway back to calls and appointments,
halfway on to next Sunday,
halfway back, half frazzled, half expectant,
half turned toward you, half rather not.
This Wednesday is a long way from Ash Wednesday,
but all our Wednesdays are marked by ashes —
we begin this day with that taste of ash in our mouth:
of failed hope and broken promises,
of forgotten children and frightened women,
we ourselves are ashes to ashes, dust to dust;
we can taste our mortality as we roll the ash around on our tongues.
We are able to ponder our ashness with
some confidence, only because our every Wednesday of ashes
anticipates your Easter victory over that dry, flaky taste of death.
On this Wednesday, we submit our ashen way to you —
you Easter parade of newness.
Before the sun sets, take our Wednesday and Easter us,
Easter us to joy and energy and courage and freedom;
Easter us that we may be fearless for your truth.
Come here and Easter our Wednesday with
mercy and justice and peace and generosity.
We pray as we wait for the Risen One who comes soon.

Today's roundup is at TeacherDance.
Posted by Ruth at 6:47 AM 6 comments:

I wrote the following poem after Valentine's Day in 2011, and today promises to be more of the same. The middle school hallway is already strewn with rose petals and earlier in the week I heard seventh grade girls bewailing the ways of seventh grade boys. It's going to be one of those days.

In the courtyard
Outside the eighth grade English class
On Valentine's Day
Two senior girls are holding armloads of red roses.
Sadly I am not one of the senior girls
Or even one of the eighth grade boys staring at them
But instead the teacher of the English class
Standing in the front of the room
And droning on.
How can I compete with the graceful flower-laden goddesses?
How can anything I have to say on Valentine's Day
Interest an eighth grade boy
When such girls exist
And when other girls exist
For whom one might buy roses,
At least in theory?
And how can a poem about love
Rival love itself:
This real girl in the next seat
Smiling secretly
At the thought
That some of those roses
Might be for her?

We had a day off school today because of political unrest, transportation strikes, burning tires in the streets, and such.  I got to do some reading and writing, which was welcome.  Here's the latest reading update:

Book #5 of 2015 was Cress, by Marissa Meyer.  This is the third book in the Lunar Chronicles, science fiction (way more fiction than science) with a fairytale twist.  I enjoyed it very much and am eagerly anticipating the fourth book coming out in November.  I have quite a few students who have been enjoying these books, too.

Books #6 and 7 were Boxers and Saints, graphic novels by Gene Yang about the Boxer Rebellion.  A quick read and it was so interesting to see the two sides of the situation, as we followed the stories of young people in the Boxer camp and the Christian camp.

Book #8 was Absolute Truths, by Susan Howatch.  This is my favorite book in a favorite series.  I have read all of them at least four or five times.

Book #9 was a Kindle Single, more of an essay than a full-length book, I Murdered My Library, by Linda Grant.  This true tale of moving into a smaller place, and having to get rid of many many books out of a library acquired over a lifetime, resonated painfully with me.  And if you could see my bookshelves, you'd know why.

Book #10 was another short one, Stories, by Rich Bowen, my brother.  I really enjoyed this collection of a few of my brother's stories, and recommend you check it out, too.

Book #11 was Between Worlds: Essays on Culture and Belonging, by Marilyn Gardner.  These essays, by a TCK who grew up in Pakistan, touch on loss, culture clashes, identity.  I cried my way through this book.
Posted by Ruth at 3:38 PM No comments:

Poetry Friday: Keats and Me

It's funny that since choosing "Unafraid" as my One Little Word for 2015, I've done a lot of thinking about fear.  All kinds of fear.

The other day I was thinking about how short life is, and how fast it goes, and how little we leave behind us.  How little I've done, and how little I will leave to my children.  The opening line of Keats' sonnet "When I have fears that I shall cease to be..." came to my mind, and I looked it up.  I had the window open the rest of the week, and the way my laptop abbreviated the title, combined with the poet, did make me giggle a bit.

Ceasing to be, that's one thing.  Ceasing eats...well, that's something else.

Seriously though, I've already lived more than twenty years longer than Keats did.  Turns out he was right to worry about ceasing to be, long before he had written all that he had in him to write, and long before he could share a life with his love.

And yet...Keats recognized there was more than Love and Fame.

When I have fears that I may cease to be
Before my pen has glean'd my teeming brain,
Before high pil'd books, in charact'ry,
Hold like rich garners the full-ripen'd grain;
When I behold, upon the night's starr'd face,
Huge cloudy symbols of a high romance,
And feel that I may never live to trace
Their shadows, with the magic hand of chance;
And when I feel, fair creature of an hour!
That I shall never look upon thee more,
Never have relish in the faery power
Of unreflecting love: -- then on the shore
Of the wide world I stand alone, and think
Till Love and Fame to nothingness do sink.

When Keats had fears like that, he wrote, and writing helps me deal with fears too.  There's something about organizing words that makes me feel more in control.

I've been working through a retelling of the Iliad with my eighth graders, and this week I wrote a poem about Thetis, Achilles' goddess mother, who wanted so much to ensure the perfect safety of her son, and just couldn't, because that's one thing about being human - we cease to be, at least this life we're living ends, and we lose and grieve.  I found this photo of a statue of Thetis (made by Thomas Banks and housed in the Victoria and Albert Museum) dipping her infant son in the River Styx to make him invulnerable. 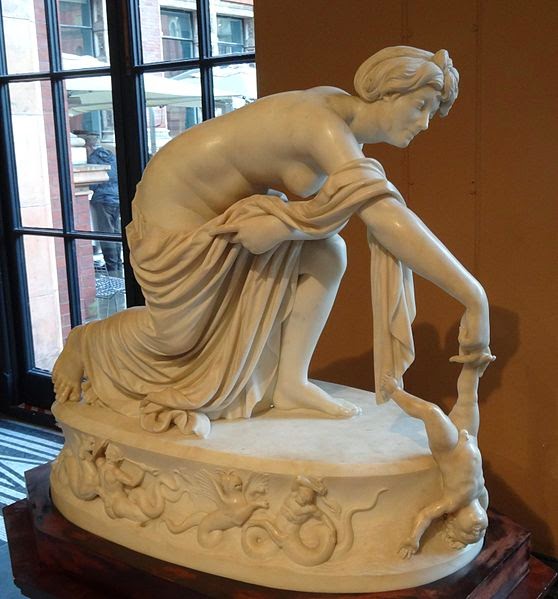 Thetis has a simple desire for her baby Achilles:
Immortality.
Not just a baby book with all his milestones carefully entered
Not just professional portraits taken every month
But real immortality.
That’s how she ends up at the entrance to Hell
Where, let’s be honest, we’d all go for our babies.

She looks as though she hasn’t even had time to get dressed,
But just wrapped herself in a sheet before rushing out her door
To do this urgent task,
This ultimate baby proofing.
Her face as she dangles her naked baby in the River Styx is calm and determined,
A bit like a mother gripping her screaming child during a vaccination,
A mother saying, “This is for your own good.”

Oh, Thetis,
If only you realized that as you clutch his little ankle
You are keeping one place from those waters
Which would make him unassailable.
Not only won’t he live forever,
But he’ll die young, as the prophets have foretold.
All your efforts to keep him safe:
Rubbing him down with ambrosia,
Burning away his mortality,
Hiding him in a dress in someone else’s court -
They will all fail.

He will win everlasting fame, of course.
But that is no consolation.
None.

I tell my students that Thetis controls Achilles
And make much of that scene where he goes to her whining,
“If I’m going to die young, the gods owe me whatever I want.”
But in reality, my sympathies are entirely with Thetis,
A mother grieving in advance
The obscene truth
That being human
Precludes invulnerability.

Thetis doesn’t care about Helen or Paris or any of those people in Troy.
She doesn’t care about the horse or the burning towers
Or Homer’s bestseller that will make untold generations sigh over her beautiful, spoiled son.
She simply holds her breath in that eternal moment
When Paris’ arrow pierces Achilles’ heel,
And loss becomes all she has.