Today we traveled, and I never got to writing a Poetry Friday post. That's the first time in many months that I've missed! Fortunately, others shared poetry, and you can find the roundup here.

Poetry Friday: Here's to You


The news this summer is horrid and the world seems to be falling apart more each day, but there are still wonderful people around and great friendships to enjoy. I'm sharing a Brooke Fraser song today, toasting old friends.

Also, Carol Varsalona is sharing the Poetry Swap poem I wrote for her at her blog. She included some of the photos I've taken this summer - another way I shift my focus from the news.

On July 2nd the daily poem from Poets.org (The Academy of American Poets) was a sonnet called "While Waiting for the Bus," by Khalil Eliot Wilson. I used to find Poets.org very easy to navigate, and now I can't find anything there, but I do still get a daily poem email from them. I tried very hard to link to it, but finally gave up and have posted it here in its entirety.

While Waiting for the Bus
by Khalil Eliot Wilson

Under the eaves of the gas-mart - swallows
fall into the day, wheel before the headless
grooms of the formal wear shop, angle low
as my shoes, then comet up, sheer, careless
of traffic, all that is grounded or down.
A flight of leaf-blown cursives, blue coats
over dashing white, the red-rift of dawn
painted upon their crowns and busy throats.
I must learn to keep them with me, to hold,
somehow, their accomplished joy when I'm gone
to the city where I am mostly old
and their song, under the noise of hours, is done.
But now, auto exhaust cripples the air
as my grey somnambulant bus draws near.

What I love about this poem is the way it captures a moment, a moment involving both nature and human life, a moment which would have just passed by if Wilson hadn't captured it in words. Poetry seems uniquely able to do that - well, poetry and photography, but I love to share this quote with my students from someone called Jarod Kintz: "A picture is worth a thousand words, but is 400% less valuable, because a picture only captures one of the senses - sight. However, words can describe the other four senses, making writing four times more potent than photography."

Often these days when I go to write something, my first step is to look through photos. (Here's a post I wrote during National Poetry Month on how I use photography in my writing.) The photo fixes the memories for me enough to help me write about what I saw and experienced.

At a thrift shop I found Winter Morning Walks: 100 Postcards to Jim Harrison, by Ted Kooser. Kooser explains in his preface that in the winter of 1998 he took daily walks early in the morning, avoiding the sun because he had just had a course of radiation treatment for his cancer. He had gone a while without writing or even reading, but inspired by the moments of his walks, he started working on poems again, and soon was putting them on postcards to his friend Jim Harrison. I love these for the same reason as I loved Wilson's sonnet. Here's the poem from December 3rd:

I have been sitting here resting
after my morning stroll, and the sun
in its soft yellow work gloves
has come in through the window
and is feeling around on the opposite wall,
looking for me, having seen me
cheerfully walking along the road
just as it rose, having followed me home
to see what I have to be happy about.

You have to capture these happy moments, don't you? You have to write about them, or snap a picture so you can write about them later, or at least take them in, all the way, breathe them in and then keep them with you as you move into the day. 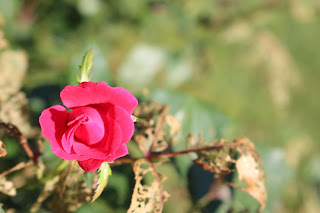 Here's a moment I captured this morning, that brave pink flower hanging on even though the bugs have eaten away the leaves into a lacy nothing. I'll write about it later, maybe...

So here we are already, halfway through the summer. Soon the back-to-school anxiety dreams will start again, and it won't be long at all before I'll be back in my classroom. I was going to accomplish so much, and as always I'm falling short. But I have had time to:

One of the unforeseen rabbit trails I have followed is an investigation of Donald Hall poetry. The Atlantic shared the following quiet, meditative video on Facebook, called "Old Age is a Ceremony of Losses," about Donald Hall growing old (here's their commentary).
After I watched that, I went searching for his writing to read. I'd read some before, and some by his wife, Jane Kenyon, but this time I read everything that Poetry Foundation would show me. I recommend doing that.

I love how specific Hall's poems are, the way they bring me into moments I never lived, especially the moments of his wife's illness. And listen to this, from a poem called "The Days," published in 1962:

Suddenly he has the idea
that thousands and thousands of his days
lie stacked into the ground
like leaves, or like the pressure of green
which becomes coal in a million years.

Here's one that broke my heart in its recreation of close friendships and happiness and tragedy and loss. A backyard wedding, friends sharing their writing, old age. (And suicide, just to warn you in advance.) I love the clear-eyed way he presents these people, without judgment, with love.

Yesterday would normally have been Spiritual Journey First Thursday, a monthly thing where a group of us respond to a spiritually-themed prompt on the first Thursday of each month. We're skipping July, but somewhere else I saw a recommendation to revisit the year's OLW (One Little Word) and evaluate how you're doing. Mine is a little hard to evaluate, because it's Possibility. I've been trying to let go of my expectations a bit and just enjoy what comes; and I think I've been doing...not too badly. Could be worse.

Happy summer days to you, especially my teacher friends. Here's to gathering strength for the upcoming year in the most unlikely places.