I posted here and here about our Open Mic events that we had here at school last year for National Poetry Month.  This school year we've decided to try monthly events, and then more frequent ones in April.  Yesterday was our first Open Mic of the semester, and though attendance was sparse at the beginning, by the end we had a nice little crowd.  I shared the following poem, written in 2013 about an experience I had with a friend.  I'm hoping that by our October gathering, I'll have some more recent offerings.  I've been writing a lot, but not much that I feel like sharing with a group.

Meanwhile, this poem is non-fiction, and I've even illustrated it with portraits of the turtles.

On the way to the store, we saw a turtle in the road.
You stopped the car and said I should move it
So I did, lifting it gently
By the sides of its yellow-splotched shell
And placing it in the grass.

I wouldn't say it seemed grateful, exactly,
But it ambled off into the trees,
No doubt to a happy future,
A sweet, docile turtle,
Rescued from the dangerous road.
We drove on,
Pleased by our neighborliness.
Today we saved a life, we said. 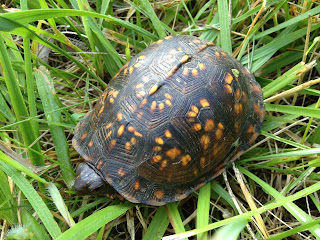 On the way home, we saw another turtle in the road.
Another chance for a good deed!
This one looked older, more weatherbeaten.
Its cracked shell studded with snails,
Along for the ride.
It had a tail worthy of a very small dinosaur.
And apparently, it didn't want to be moved,
Since when I picked it up,
It clawed my hand, drawing blood.
Startled and in pain,
I dropped the turtle on its already battered shell.
It flipped itself over onto its feet again,
A prehistoric acrobat, fueled by anger.

You said you'd try, and approached it,
While it glared at you,
alert to your every move.
You offered it a stick, which it attacked,
Breaking it in half.

This turtle, dancing with rage,
We left behind us.
Clearly it did not wish for rescue,
And we decided it was on its own. 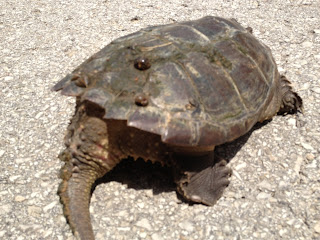 A visit to Google later taught us
The difference between a box turtle and a snapping turtle,
And which one is best left alone.

But you'd think, wouldn't you,
That we'd have learned by our age to be a bit more wary?
That we'd already know something about what to pick up
And what to leave lying there on the road?
But we don't.  Whatever turtle is there,
We always try to help, get involved, handle it, mess with it,
The ones that wander off amiably
And the ones that wave their fearsome dinosaur tails.

Even now, nursing my wound,
I know that the next time I see a turtle in the road,
I'll rush naively to its rescue.

I'm not sure where August went.  I remember it was a really sad month, as I said goodbye to my firstborn and dropped her off at college.  I remember coming home and starting into the new reality.  I'm figuring it out day by day.

This D.H. Lawrence poem was in the Poets.org Poem-a-Day email one day last week.  I love the way it captures those moments when you are aware of the existence of your perfect love - for your spouse, your child, your friend - and then the moment when you see the difference between the beautiful ideal and the day to day.  Seriously, why do we suffer when such perfect love exists?  Why can't we live on that plane all the time?  I suspect it has something to do with that line "gone to sleep."  The way your baby is an angel while sleeping, and a needy tyrant once awake.  I want to spend more time being aware of that perfect love.  Sure, the suffering is part of it, but so much gratitude, too, for the love, the love that is "almost bliss."

The little river twittering in the twilight,
The wan, wondering look of the pale sky,
This is almost bliss.
And everything shut up and gone to sleep,
All the troubles and anxieties and pain
Gone under the twilight.
Only the twilight now, and the soft “Sh!” of the river
That will last forever.
And at last I know my love for you is here,
I can see it all, it is whole like the twilight,
It is large, so large, I could not see it before
Because of the little lights and flickers and interruptions,
Troubles, anxieties, and pains.
You are the call and I am the answer,
You are the wish, and I the fulfillment,
You are the night, and I the day.
What else—it is perfect enough,
It is perfectly complete,
You and I.
Strange, how we suffer in spite of this!

Linda is hosting the roundup here.