I shared this poem once before back in 2008. I love how specific it is, and how it places us in one unrepeatable moment.

Yes, I remember Adlestrop –
The name because one afternoon
Of heat the express-train drew up there
Unwontedly. It was late June.
The steam hissed. Someone cleared his throat.
No one left and no one came
On the bare platform. What I saw
Was Adlestrop – only the name

And willows, willow-herb, and grass,
And meadowsweet, and haycocks dry,
No whit less still and lonely fair
Than the high cloudlets in the sky.

And for that minute a blackbird sang
Close by, and round him, mistier,
Farther and farther, all the birds
Of Oxfordshire and Gloucestershire.

Book #35 was Handle with Care and #36 was Plain Truth, both by Jodi Picoult.  These aren't great literature, but they are absorbing stories with courtroom dramas at the heart of them.

Book #37 was Flora, by Gail Godwin, a story set at the end of World War Two and involving regret and remorse.

Book #38 was The King's Curse, by Philippa Gregory.  This is the unremittingly awful story of Margaret Pole, who lived in the time of Henry VIII and managed, like so many others, to fall afoul of him.  Pole was from the Plantagenet family, rivals to the Tudors.  She spent years as the governess of Henry's daughter Mary (later called Bloody Mary).

After these four rather dark books, I really need to find something more cheerful to read!
Posted by Ruth at 1:03 PM 1 comment:

Poetry Friday: The Art of Losing

I guess this must be one of my favorite poems, since this is the third time I have posted it on my blog.  I shared it in May 2010 and again in May 2013.  The art of losing and the art of living are almost synonymous.  When I posted this in 2013, Mary Lee (who is hosting today's roundup - check it out!) commented: "So why do we need to PRACTICE loss, Ms. Bishop? Why can't we focus on shoring ourselves up for loss with loves (both large and small)?"  She's right.  Love is what shores us up.  But it's also why loss hurts so much.

Thinking about Mary Lee's question, I came to this conclusion: having experienced many losses in the past teaches us that life does go on.  It teaches us that we can survive losses we didn't think were survivable.  In that sense, maybe we make a little progress towards the art of losing.

But I think Elizabeth Bishop is trying to convince herself here.  She is facing a loss that feels like disaster to her.  She is facing it, bravely, not turning away.  She isn't numbing it or pretending it isn't there.  "Write it!" she urges herself.  In saying the art of losing isn't too hard to master, she's saying that it is terribly hard, the hardest.  Frankly, I often want to stop the loving because the losing hurts so much.  I don't want to reach out and attach and care.  But if I didn't, I wouldn't be mastering the art of living.


One Art
by Elizabeth Bishop

The art of losing isn't hard to master;
so many things seem filled with the intent
to be lost that their loss is no disaster.

Lose something every day. Accept the fluster
of lost door keys, the hour badly spent.
The art of losing isn't hard to master.

Then practice losing farther, losing faster:
places, and names, and where it was you meant
to travel. None of these will bring disaster.

I lost my mother's watch. And look! my last, or
next-to-last, of three loved houses went.
The art of losing isn't hard to master.

I lost two cities, lovely ones. And, vaster,
some realms I owned, two rivers, a continent.
I miss them, but it wasn't a disaster.

- Even losing you (the joking voice, a gesture
I love) I shan't have lied. It's evident
the art of losing's not too hard to master
though it may look like (Write it!) like a disaster.
Posted by Ruth at 5:18 AM 3 comments:

Even though school's been out for a couple of weeks now, I was on campus yesterday looking for a particular book.  I found it, and then on my way home I found a whole stack of books that looked as though someone was throwing them away.  One of them was a book of Hafiz's poetry, and I grabbed that and brought it home for safekeeping.

Here are some poems from the book that I especially liked: 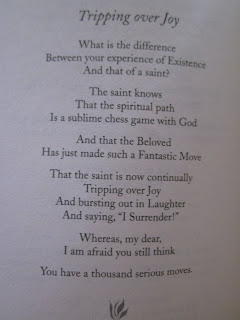 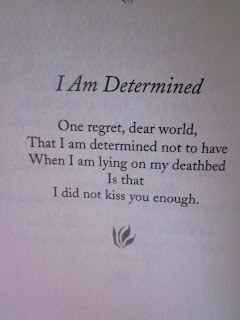 Here's another Hafiz poem I posted back in 2013.

The amazing Jama has the roundup today, and the results are sure to be delicious!

Book #22 of 2015 was Love at the Speed of Email: A Memoir, by Lisa McKay.  I found this author when a Facebook friend posted an update from her blog after the recent cyclone in Vanuatu.  McKay's husband had just moved there, and she was waiting in Australia to get the all-clear to bring their two sons and join him.  This book is the story of how she and that husband got together, and I thoroughly enjoyed it.  I could relate to McKay's international background and struggles with identifying home.

Book #23 was Searching for Sunday: Loving, Leaving, and Finding the Church, the long-awaited new book by Rachel Held Evans.  Articles about the book have presented it as Evans' less-than-fond farewell to evangelicalism, but it's not really that.  It's more a love letter to the Church and all that is beautiful in it.  With anyone we love and know very well, we can also find plenty of flaws, and Evans does that too.  This book is so wonderfully written - she's getting better and better.  It's organized around the seven sacraments identified by the Catholic church.  I'd love to discuss this with a group; there's so much in it.

Book #24 was Gap Creek, by Robert Morgan.  It was like "Little House on the Prairie" (the TV show) on steroids.  Remember how in every episode there was some kind of horrible crisis?  It's the same in this book, except it all takes place in one year.  A note tells us that it's based on the first year of his grandparents' marriage.  Oh my word.  It's amazing anybody survived Appalachia right after the Civil War.  This book is harrowing but brilliant.  I recommend it, but I had to follow it with some lighter fare.

Book #25 was Greetings from Nowhere, by Barbara O'Connor.  I read this YA book with my seventh graders to finish out the year.  It was maybe a little young for them, but we all enjoyed it, nonetheless.  The book is written in several voices, which we'd encountered before in Seedfolks, and we liked the way it didn't wrap up too neatly.

Book #26 was As Easy as Falling Off the Face of the Earth, by Lynne Rae Perkins.  I finished the year with this in eighth grade, and found it moved a little slowly for that class, who prefer their books a bit more action-packed.  I really liked it, though.  It was very quirky and fun, with characters who were oddly believable in spite of being so bizarre.

Book #27 was I Kill the Mockingbird, by Paul Acampora.  This one was a lot of fun, another YA title, centered around summer reading and some kids who decide to start a campaign to convince people to read To Kill a Mockingbird, using reverse psychology, social media, and ingenuity.

Book #28 was Orchards, by Holly Thompson, the same author who wrote The Language Inside, which I read last year but don't seem to have added to my list or blogged about, so I'm going to count that one for this year as #29.  Both books are verse novels and both have a Japanese setting.  I chose The Language Inside because it was about the 2011 earthquake in Japan and an American girl displaced to the US by the illness of her mother.  I've used it with students for a couple of years now, and while the kids don't love it quite as much as I do, it does go down well with them, and there's a lot to talk about in it.  Orchards also has cross-cultural themes, as it concerns a girl who is half-Japanese and is sent to Japan to spend time with her family there after a girl in her class commits suicide.  I'm considering this one for a read-aloud next year.

Book #30 was Cruel Beauty, by Rosamund Hodge.  This one is sort of a Psyche and Cupid/Beauty and the Beast/Bluebeard retelling, but with many interesting quirks.  I found the exact plot details a bit confusing at times, but the overall story was very evocative and satisfying.

Book #31 was Why I am an Atheist who Believes in God: How to Give Love, Create Beauty, and Find Peace, by Frank Schaeffer.  Schaeffer has a compelling voice, and that's what kept me reading.  I enjoyed his ruminations on growing up evangelical, and while I don't agree with all of his conclusions, I did find his rather curmudgeonly persona quite appealing.

Book #32 was So, Anyway..., a memoir by hilarious British comedian John Cleese.  It moved along pretty well, with interesting anecdotes, until suddenly Cleese seemed to lose interest and summed up thirty years in one chapter.  So anyway, is there going to be a sequel?

Book #33 was Good Harbor, by Anita Diamant.  This was a bit slight, but entertaining.

Book #34 was Mr. Penumbra's 24-Hour Bookstore, by Robin Sloan.  I read this with a tech-y friend, and we both enjoyed it.  It starts out being about books, and ends up being about the internet, and in between is a lot of fun.

This song is pure summer to me; it expresses the feeling of dozing on a hot afternoon, having deep dreams, hearing the buzzing fly, waking up, and dozing again. Chris Rice is dreaming of heaven; what better way to spend a summer afternoon?

Lazy summer afternoon
Screened in porch and nothin' to do
I just kicked off my tennis shoes
Slouchin' in a plastic chair
Rakin' my fingers through my hair
I close my eyes and I leave them there
And I yawn, and sigh, and slowly fade away

Awakened by a familiar sound
A clumsy fly is buzzin' around
He bumps the screen and he tumbles down
He gathers about his wits and pride
And tries again for the hundredth time
'Cause freedom calls from the other side
And I smile and nod, and slowly drift away