Book #2 of 2011 was Night Over Water, by Ken Follett. This was my first book by this author. It's the story of an assortment of travelers on the Pan American Clipper, a combination airplane and boat that really existed, and a transatlantic flight in 1939. I had never heard of these planes and there are a lot of interesting details in the story about what they were like.

Book #3 was The Cellist of Sarajevo, by Steven Galloway. Set in Sarajevo in the early 90s, this book tells the story of four characters who are trying to survive the war. The cellist of the title sets out to play Albinoni's Adagio after a mortar attack on his neighborhood. "He'll do this every day for twenty-two days, a day for each person killed. Or at least he'll try. He won't be sure he will survive. He won't be sure he has enough Adagios left." The other characters are a man who works in a bakery, a father who spends large amounts of his time making sure his household has enough water, and a sniper, Arrow. Here is Arrow before the war: "She felt an enveloping happiness to be alive, a joy made stronger by the certainty that someday it would all come to an end. It overwhelmed her, made her pull the car to the side of the road. Afterward she felt a little foolish, and never spoke to anyone about it. Now, however, she knows she wasn't being foolish. She realizes that for no particular reason she stumbled into the core of what it is to be human. It's a rare gift to understand that your life is wondrous, and that it won't last forever." Arrow is assigned to protect the cellist as he plays his music. This was a horrifying book, describing as it does life in Sarajevo, where a sniper's bullet could hit you at any moment as you went about your business. However, it was also a beautiful one, showing how human beings can survive.

Book #4, Fire, by Kristin Cashore, was not really my kind of book, and yet I enjoyed it immensely. I don't read a lot of fantasy, and I found the plot had some big holes in it. But I loved the characters in this book. As in Graceling, to which this book is billed as a "companion," there is a lot of mind-reading, and Cashore does it expertly, with Fire, the main character, picking up feelings and impressions from people around her, even those who shield their minds, which in this world it is possible to learn to do. Fire is a "monster," meaning she has special abilities and irresistible beauty. The beauty is more of a liability than anything else, and Fire struggles to deal with the effect she has on others. The range of relationships Cashore describes is so much fun to read about, and there's romance, but not at all in a stereotypical way. The one concern I have about this book, as I did with the other one, is the attitude of the young women protagonists towards sexuality; both Katsa (in Graceling) and Fire are extremely resistant to marriage, though not to sex (which isn't described explicitly but is very obviously happening). This book is supposed to be for kids my students' age, but I'd give it to older teenagers. Cashore does such a beautiful job telling her story, and I'm not entirely sure why, but reading this book made me happy. (I'm expecting my literature degrees to be revoked immediately after that last sentence.) 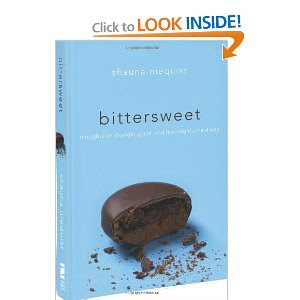 Book #5 was Bittersweet: Thoughts on Change, Grace, and Learning the Hard Way, by Shauna Niequist. Katie texted me Sunday night and said "I have a book for you!" She gave it to me in our staff meeting on Monday morning. She said she thought of me the whole time she was reading it. I'm not quite sure why she did (I'll ask her next time I see her), but she was right to think that I'd love this book. It reads like a blog between covers, and sure enough, the author blogs. (I added her to my Blog List yesterday.) Niequist tells, in short essays (posts, really), about a difficult time in her life, when she lost a job, had a baby, had a miscarriage, and lost friends who moved away. I enjoy her voice. Here's a sample, from her description of grace:

"If arithmetic is numbers, and if algebra is numbers and letters, then grace is numbers, letters, sounds, and tears, feelings, and dreams. Grace is smashing the calculator, and using all the broken buttons and pieces to make a mosaic.

Grace isn't about having a second chance; grace is having so many chances that you could use them through all eternity and never come up empty. It's when you finally realize that the other shoe isn't going to drop, ever. It's the moment you feel as precious and handmade as every star, when you feel, finally, at home for the very first time.

Grace is when you finally stop keeping score and when you realize that God never was, that his game is a different one entirely. Grace is when the silence is so complete that you can hear your own heartbeat, and right within your ribs, God's beating heart too."

This post is linked to today's Saturday Review of Books.

Ken Follett wrote a bunch of WWII spy novels, but he also wrote Pillars of the Earth, which is about the building of a cathedral, and is a fantastic book. Apparently there's also a sequel to that, but I haven't read it.

Ruth, I always love your book reviews. And I cannot tell you how much I needed that last quote. Wow, so beautiful- I do hope it's true!