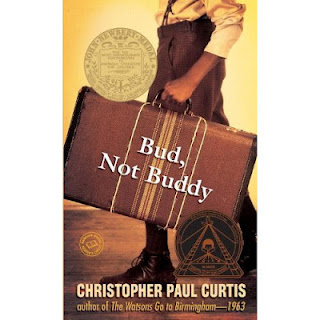 Book #9 of this year was Bud, Not Buddy, by Christopher Paul Curtis.  I read this book because I'm going to be hearing Christopher Paul Curtis speak next week at the IRA conference in Chicago.  (That's International Reading Association, not Irish Republican Army.)  I've never read anything by Curtis before, but some of my students were reading this book last week, and one of them said, "Isn't this the same guy who wrote The Watsons Go to Birmingham?"  I said yes, and asked if the student had enjoyed that one.  He said fervently, "Oh yeah."  So looks like I'll have to read that one too.

I loved this book.  It's the story of a boy finding home, and what could be better than that?  Bud (whose mother named him Bud, not Buddy - "Bud is your name and don't you ever let anyone call you anything outside of that either....Especially don't you ever let anyone call you Buddy.  I may have some problems but being stupid isn't one of them, I would've added that dy onto the end of your name if I intended for it to be there.  I knew what I was doing.  Buddy is a dog's name or a name that someone's going to use on you if they're being false-friendly.  Your name is Bud, period.") is growing up in an orphanage in Flint, Michigan in the Great Depression.  As the book opens, he's just been told he is going to go to a foster home.

Staying with the Amos family doesn't work out too well, to put it mildly, and his escape from there is the beginning of a series of adventures that takes Bud and the reader through life in the Depression and to one of the most satisfying endings I remember for a book in a very long time.  Bud-not-Buddy is a wonderful character, fully realized and completely believable, whether he's fighting, telling us his rules for living, or describing the world around him.  Here he is talking about the smell of an instrument case:  "The case had some soft smooth black stuff all over the inside of it, it covered everything, even the dent.  There was a real old smell that came out of it too, like dried-up slobber and something dead.  It smelled great!"  Here he is talking about music:


"All of the instruments blended up together, and just like that smell in the library, you couldn't tell which one was your favorite.  First you'd say it was Mr. Jimmy on the trumpet, then Doo-Doo Bug's trombone would make you think it was the best, then Dirty Deed would make the piano sound like water hitting big rocks and you'd know there wasn't anything that sounded that good until Steady Eddie would make the saxophone sing and talk and dance around everyone else and you'd swear that was the only sound you'd ever want to hear again.  All the while Herman E. Calloway and the Thug kept everything moving by making the drums and the giant fiddle pound out a soft steady beat, like someone's heart turned way up loud."


Even though Bud's life is difficult, he finds kindness from a series of memorable characters.  Bud is resilient, and ultimately the book is inspiring because he rises above everything that has happened to him in the past and finds the place he belongs.  Highly recommended in case there's anyone besides me that hasn't read it already.

Christopher Paul Curtis is a wonderful author. Bud, Not Buddy and The Watsons Go to Birmingham were two of my favorite books growing up. The Watsons Go to Birmingham is hilarious, although it does have a very serious historical tragedy in it which might be difficult to read. I would definitely recommend reading it. If you find the book on tape, the narrator does a great job with reading it out loud.