I've been up since three this morning traveling, and now I'm home and exhausted.  But I'm still excited about the chance I had while in San Antonio to meet some Poetry Friday people whose blogs I have been reading for years.

I had posted last week that I was going to the IRA convention and wondered whether any of the Poetry Friday bloggers would be there.  Irene Latham wrote me an email giving me some names of people who would. I went to post a comment on Amy's blog and found that she was doing a session with Sylvia Vardell and Joyce Sidman and Janet Wong, so I planned to go to that. Then Mary Lee sent me her phone number, and when we talked, she told me she'd be at that session too.

I went to the session, which was one of the best of the whole convention.  They were talking about this book: 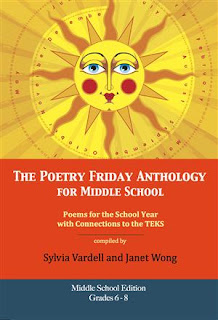 I had already bought it for my Kindle, but was excited to win another copy at the end of the session. I would much rather work with the paper copy, anyway.  All the presenters talked about simple and non-time-consuming ways to use these poems, while still meeting Standards,  the new be-all and end-all of education.  (The photo here is of the Texas edition of the book; there's also an edition with Common Core standards.)  The anthology is full of beautiful poems.  It was fabulous to hear Janet, Amy, and Joyce read.

Even better than the session itself, though, was meeting the people who were there.  At the beginning, when Sylvia was asking who was from Texas and who was from elsewhere, Amy shouted out, "Who is from Haiti?"  I waved my arms.

When it was over, we took photos and I enjoyed putting faces to names.   Also there was indefatigable commenter Janet F., soon-to-be blogger and already cheerleader for poetry.

The whole way through the conference I felt I was with "my people": folks who love reading and books and think literacy is among the most important gifts there is.  I felt that especially in the poetry session.  I'm so thankful for the community we can build on the internet, for what I can learn from these amazing poets, and for their kindness to me.
Posted by Ruth at 2:38 PM

Sounds wonderful, Ruth. I'm glad you had such fun!