I found this poem a couple of weeks ago by following a link from The Opposite of Indifference.  In "Monet Refuses the Operation," by Lisel Mueller, Monet is telling his doctor that he doesn't want his vision to be "corrected," because he likes the way he sees the world.


I will not return to a universe
of objects that don’t know each other,
as if islands were not the lost children
of one great continent.  The world
is flux, and light becomes what it touches,
becomes water, lilies on water,
above and below water,
becomes lilac and mauve and yellow
and white and cerulean lamps,
small fists passing sunlight
so quickly to one another
that it would take long, streaming hair
inside my brush to catch it.


Here is the rest of the poem. 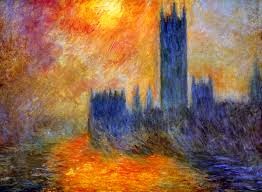 I love the idea that Monet has taken his whole life to "arrive at the vision of gas lamps as angels," and to discover that "Rouen cathedral is built of parallel shafts of sun."  I wonder what aspects of aging I could see as benefits, if I just squinted my eyes the right way.

When I wrote this post, I didn't know who was hosting the roundup today.  What a coincidence!  It's Tabatha at The Opposite of Indifference.  Go here to read what great poems everyone has today.
Posted by Ruth at 2:00 AM

Wow! This poem totally blew me away!! Definitely a takes the top of your head off poem. I'd missed it before at Tabatha's, so I thank you very much for sharing it today!

"I love the idea that Monet has taken his whole life to "arrive at the vision of gas lamps as angels," and to discover that "Rouen cathedral is built of parallel shafts of sun." I wonder what aspects of aging I could see as benefits, if I just squinted my eyes the right way." I couldn't have said it better! "Blue vapor without end." Ahhhh...

It's always nice to hear that someone is savoring a poem from another week! I like the painting you chose to share with it.

Thanks so much for posting this.

I love the way Monet talks back to his doctor. Let me be ME, he says.

I love this poem's idea, too. Have you ever seen the movie "At First Sight"? It's about a blind man given an operation that restores his sight, and he finds it very disorienting. Like Monet, he found the world more meaningful before his operation.

What a lovely thing to see angels everywhere. The colours, the images, such beauty. Thanks for sharing this, Ruth.

I love this poem Ruth! Thinking of you and your family and QCS lots- hope you all are well.

Another great poem this week. Thank you for so many great poems. I always look forward to reading what you select for the poetry roundup.

Wow -- this is terrific. Thanks for sharing the link to this poem. It made my evening! -Ed

How infinitely the heart expands/to claim this world--
This is one of those poems that has it all: the beautiful language and imagery that we look for, but also history and voice and perspective and geography and culture and science and philosophy AND an uplifting and not at all preachified message. Wow is right.
Thanks, Ruth and Tabatha!

The final lines of this poem took my breath away!
If only we all "could see/how heaven pulls earth into its arms/and how infinitely the heart expands/to claim this world, blue vapor/without end."
Thank you so much for sharing!

This one really touched me too.