In an effort to lower my snarkiness level, I am going to write a post about what I've been reading. It's a challenge to find the perfect book to read in these times, as I've remarked before. I had chosen A Man Called Ove, by Fredrik Bakman, to read aloud to my husband, and I abandoned it because it was the - whatever the opposite of a sweet spot is - combination of depressing and triggering and attempted but not succeeded endearing. I don't want fluff to read, but I can't handle majorly traumatic right now. Learning new things is good, up to a point. I feel as though I am not reading much, but then I see that I've finished eleven books since this time last month, so I guess that's not too much of a slump.

Book #34 of this weird and increasingly horrifying year was I Know Why the Caged Bird Sings, by Maya Angelou. I thought I knew quite a bit about this book, but it's way more interesting and quirky than I realized. A memorable moment is her high school graduation, when she describes singing "Lift Every Voice and Sing" after a humiliating and obnoxious speech by a white man, and for the first time in her life really hearing the words.

We've been singing this at our church for the last few years, and it is such a beautiful song and so packed with meaning. I am sorry it took me so long to find it.

Book #35 was The Ballad of Songbirds and Snakes, by Suzanne Collins, the prequel to the Hunger Games books. This is the story of future Panem president Corialanus Snow. I found it depressing but absorbing.

Book #36 was Eleanor Oliphant is Completely Fine, by Gail Honeyman. I had somehow formed the impression that this was a light, fun read. Not so much.


Here's a taste: "He'd elected to look after me himself. I'd been pondering this, and concluded that there must be some people for whom difficult behavior wasn't a reason to end their relationship with you. If they liked you - and, I remembered, Raymond and I had agreed that we were pals now - then, it seemed, they were prepared to maintain contact - even if you were sad, or upset, or behaving in very challenging ways. This was something of a revelation."


Book #37 was The Clergyman's Wife, by Molly Greeley. I'd like to discuss this Pride and Prejudice sequel with a group. The clergyman's wife of the title is Charlotte Lucas Collins. There were things I really liked about this and things I really hated. One thing I liked was that it maintained the mournful ambiguity of the original presentation of Charlotte's story. I was glad to see things through Charlotte's eyes, rather than Lizzy's, because let's face it, however delightful Lizzy is, it does get tiresome to see her laughing merrily at everyone. Jane Austen herself sees there's more to Charlotte, I think. I also really liked the way I started to see endearing qualities about Mr. Collins. Again, having Lizzy a long way away helped with that. Please read it and let's talk about it.

Book #38 was Beach Read, by Emily Henry. I didn't love this, but it did hold my interest. And I enjoyed the focus on January's past, her family and her friendships. I enjoyed the portrayal of novel-writing, too.

Book #39 was Nothing to See Here, by Kevin Wilson. Wow! I loved this book! It was so quirky and unpredictable and I realized how long it had been since I had read something that just completely surprised me. It's also heartbreaking and beautiful in a very ugly and painful way. And the characters, while wildly improbable things happen to them, are completely believable. A lot of people won't like the language.


Here's a taste: "This was how you did it, how you raised children. You built them a house that was impervious to danger and then you gave them every single thing that they could ever want, no matter how impossible. You read to them at night. Why couldn't people figure this out?" 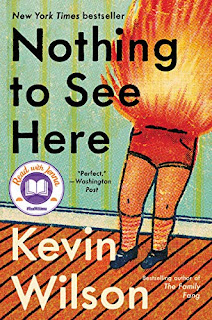 Book #40 was a re-re-re-re-re-read, Life of the Beloved, by Henri Nouwen. I hope some day I won't have the need to reread this book constantly, but so far I still need it. It's such a great reminder of how much God loves us, and how that's what we need, not the love and approval of other people. At least, we don't need the love and approval of other people nearly as much as we think we do. See how I can type those words and even believe them? Some day I will live as though I believe them.

Book #41 was Olive, Again, by Elizabeth Strout. "There were so many things that could not be said, and this had occurred to Cindy with more frequency and it made her heart ache." This is a sequel to Olive Kitteredge, which I read and reviewed here in 2010. Like the original, this one is told in interconnected short stories, and like the original, it's about loneliness. The characters are so finely drawn and their experiences are so realistic that they made me squirm. Elizabeth Strout is an amazing writer.

Book #42 was Meg & Jo, by Virginia Kantra. This is a retelling of Little Women, but happening today. I liked many things about it, but I wasn't sure I wanted to know that much about the sex lives of the March girls. But I saw there's going to be a sequel about the other two sisters, and I will totally read it.

Book #43 was Healing Maddie Brees, by Rebecca Brewster Stevenson. I had started this several months ago, but for some reason not finished it. It's beautifully written and a very realistic, serious look at a marriage. I recommend it.

Book #44 was The House Girl, by Tara Conklin. One of the goosebumps moments in this book - and there were quite a few - was when Lina, a lawyer working on a case that would demand reparations for slavery, is sitting in her room writing down what happened to a bunch of people in a historical document, from bad living conditions to abuse to rape to murder: "Lina wrote on her yellow legal pad: The harm is immeasurable." There's a lot going on in this story - motherhood, art, workplace politics, hideous racism, the Underground Railroad - yet somehow it never seemed too much. I thought Tara Conklin handled it beautifully and gave me a fresh look at a subject I've read about countless times before. It reminded me a little bit of Kindred, by Octavia Butler, which I read in 2016 and reviewed here, but without the time travel. Like that book, it makes absolutely zero effort to turn slavery into a pretty story. It's hard to read, but read it.
Posted by Ruth at 8:24 AM

So many great books! I totally agree with your review of Beach Read. Those were the same things I enjoyed about the book. I did not enjoy the romance (especially the pretty explicit sex scenes) since I typically avoid romance. I have read Nouwen's The Inner Voice of Love, Love Henri (his letters to people), and (my favorite!!) The Return of the Prodigal Son. I have been wanting to read Life Of The Beloved, especially after your review, since I definitely need constant reminders of His love for me.