Yesterday was a new holiday in Haiti, Dessalines Day. Yes, we've had Dessalines Day for a long time, but always in October, commemorating the day of his death. This year we are celebrating the day of his birth (and we will still have the holiday in October, as a day of mourning). The US Embassy put this painting of Dessalines on Facebook with their notice that they would be closed on Monday, September 20th. Then the comments started. Some said the Embassy should keep the sacred name of Dessalines out of their mouths (they aren't worthy to speak it). Many muttered about hypocrisy. Someone asked what independence they were talking about (Dessalines is a hero of the Haitian struggle for independence). Isn't the US ashamed to claim to be Haiti's friend, people wanted to know? One said that the US was deporting 275 Haitians to mark the day. Several said, "Bondye wè nou." God sees us.
Some of the people returning to Haiti right now have been out of the country more than ten years. They went to South American countries for jobs, like getting ready for the Olympics in Brazil or construction work in Chile. Now they have undertaken the incredibly difficult and dangerous journey through South America and Central America, reached the border with Texas, crossed it, and boom, they are suddenly back in Haiti. Many of them are children born in one of those countries along the way, kids who've never been to Haiti before at all. The people under that bridge in Texas aren't trying to make some political point; they are trying to find a place where they can work and feed their families. Have you seen the photos of border patrol officials on horseback with whips, rounding up Haitians who are bathing or washing clothes in the river? I assure you that in Haiti people have seen those photos. When I saw them, they were captioned, "Our misery." 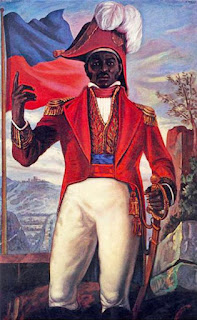 Here's my post from the original Dessalines Day in October, from 2011.
And here are other people's slices for today.
Posted by Ruth at 12:00 AM

Ruth: thank you for calling attention to to the plight of Haitians and to the national hero, Dessalines. To think of people being sent back after having lived elsewhere for ten years...children being sent to a country they do not know as "home"... it is inhumane. Every human being deserves the right to work and feed their families. That phrase "God sees us" speaks to such faith and hope despite all the ungodliness.