This will be a turtle-y post in honor of our new turtle, Bruno.  Actually his/her (?) name with the previous owners was Smyrtle, and I did argue with my children about the advisability of changing the name, so my son retained Smyrtle as a middle name.  I'm not sure if Bruno Smyrtle is happy in this new environment, but s/he tolerantly put out his/her head and let me take a photo (you can see my hands and camera reflected in the water). 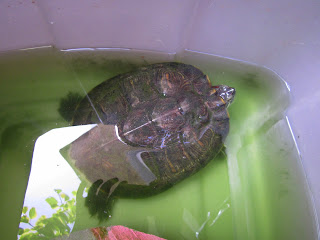 The small Bruno Smyrtle couldn't be more different from the turtle I saw in the news a couple of weeks ago, the one who washed up on Butler Beach, in Florida.


Kay Ryan imagines that it isn't much fun to be a turtle.

Who would be a turtle who could help it?
A barely mobile hard roll, a four-oared helmet,
she can ill afford the chances she must take
in rowing toward the grasses that she eats.
Her track is graceless, like dragging
a packing-case places, and almost any slope
defeats her modest hopes.

You can read the rest of this poem here.

The Adventures of a Turtle
Russell Edson

The turtle carries his house on his back. He is both the house and the person of that house.

But actually, under the shell is a little room where the true turtle, wearing long underwear, sits at a little table. At one end of the room a series of levers sticks out of slots in the floor, like the controls of a steam shovel. It is with these that the turtle controls the legs of his house.

You can read the rest of that one here.


And here's today's Poetry Friday roundup.
Posted by Ruth at 2:00 AM

Funny turtle-y post. Kay Ryan's poem is so spot on describing a turtle. Looks like Bruno is happy in his/her new home.

Congrats on your new turtle. We had small turtles when I was a kid and we loved them. They were easy to care for and fun to watch.

Thanks for sharing the turtle poems. Loved this line:

and almost any slope
defeats her modest hopes.

Great poems, both new to me -- had me thinking about turtles in such different ways. Love Edson's fanciful observations; want to read more of his work!

Love the name Bruno Smyrtle! We hatched a duck and kept it for a few weeks (long story) that my girls named Benedict Turtle Cumberduck. (My youngest was hoping the egg was a turtle egg). She SO wants a turtle! What kind of turtle is Bruno? What is your feeling about care/feeding etc? Such a timely post for me. I'm going to share the turtle poems with my 9 y/o. Thank you! =)

Well, Ruth, I've been catching up on your posts. I still need to read the IRA ones & I will, perhaps this weekend! I love the turtle poems, especially the second one, delightful. I will hold on to that poet's name! But even more I read your 'dangers of living in Haiti' which led me to your friends & about Beth, which then led to Tara Livesey. I loved reading all of it, am so admiring of those women who are doing so much. I've read The "Borders" book about Dr. Paul Farmer & wonder what you in Haiti think of him? Anyway-thank you for writing so much that is good!

"So much that is good," as Linda says, is right! Thanks for always sharing so broadly. This post was a natural to read after Margarita Engle's interview over at No Water River today, where she revealed her first poetic lines she ever wrote happened to be about a turtle....
All best to Bruno Smyrtle and Co.

Bridget, I don't know much about the turtle. I will try to find out more. :-) So far I have had nothing to do with caring for him/her either.

Linda, I read Mountains Beyond Mountains - is that the book you mean? I quoted it here: http://thereisnosuchthingasagodforsakentown.blogspot.com/2008/06/two-planets.html. I think there is a lot to admire in Paul Farmer. Thanks for your always encouraging comments!

I love that Kay Ryan poem. It's probably my favorite by her!

What a great video!! Loved the sound of the wind and the water. Hard to believe that great lumbering rock will be able to break loose from the land and swim back out through that tide. Gives a hint of the power in those flippers...

Hi, Ruth. I was familiar with the Kay Ryan poem, but not Russel Edson's piece. I love it! It's so surreal and playful, the turtle in his long johns. Thanks and good luck with your new adoptee.