This week I'm participating in a photo exchange called "More than Meets the Eye," organized by Margaret. She asked people to sign up, and then she matched us up with a partner who lived somewhere else. The instructions were to send a photo from where you lived to the other person, and then to write a poem about the photo you received.

I got a photo from Heidi. As soon as I saw it, I thought of Karla Kuskin's poem "Write About a Radish," which begins "Write about a radish./ Too many people write about the moon."

Here's the photo and my poem: 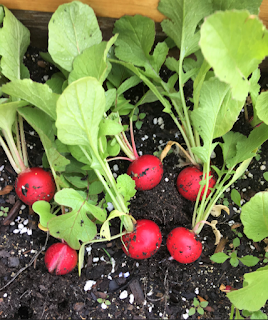 When Margaret told us to send a photo of where we live,
I sent a view of a far-off beach,
and you could see the sky and the ocean and palm trees
stretched out for miles and miles and
this is where I live,
at least after you drive for two hours
and stand on a mountain
and think about being at the end of the road
and how beautiful it’s going to be when you get there

When Heidi sent a photo of where she lives,
it was a close-up of six radishes
freshly pulled from the ground,
and they were cherry-red,
so red that from now on the expression must be radish-red,
and their leaves were fresh and green
and the soil was black and
this is where she lives,
when you get down on your hands and knees
and think about being here where you are
and how beautiful it is right this moment

So I Googled radishes and read about
how they were the first European plant to be introduced to the new world
and how they have 18 chromosomes
and deter aphids
and have 18% of your requirement of Vitamin C
and then I thought here I go again, standing on a mountain,
looking at all the radishes in the world,
instead of at these radishes that Heidi sent me

and so then I put out my hand
and grabbed a radish off of my computer screen
and took a bite out of it
without even washing off the clumps of dirt,
and it was sharp and crunchy
like the essence of salad
and I looked at the the marks my teeth had made in it
and felt its curve with my fingers,
and there were still five more radishes
and I thought what am I waiting for?


Here's Heidi's poem about my photo.

This was so fun, and I think we ought to do it again, sooner rather than later.  As well as creating this challenge, Margaret is also our Poetry Friday host this week, and you can see her roundup here.
Posted by Ruth at 1:53 PM

Ruth, I love this poem, the wandering nature of it, the appreciation of noticing and being and then the crunch of the radish. I think it fits in well with who Heidi is as a poet. She always has a playful sense around her poetry. So with this poem you've captured the photo and the photographer with a dash of yourself, too. Love it!

Read your poem, Ruth. Loved it. Then I read it again and loved it even more. I'm grateful that I can bookmark this post and keep coming back for more.

Boy, do I love this poem, Ruth! You sure had fun with it. I love the conversational style, the comparative descriptions of your geographical places and how you realized that the radishes right in front of you were the ones to experience! Delicious poem!

How delightful!! I must remember "radish-red." I love the voice in your last stanza. When I finished reading, I was hungry for a radish sandwich -- the kind I had as a kid: sliced radishes (just pulled from my mother's garden), lightly salted and put between two slices of buttered white bread. I would put as many radish slices as I could without the sandwich falling apart.

Taking every single piece of the world that's possible and loving it is my response to your wonderful poem, Ruth. Each part's a joy, and each part would be loved by Karla Kuskin. That's a favorite poem of mine!

Ruth, this is an intriguing view and re-view of our two photos, and a poignant reflection on personal perspective, and a wry meditation on simple gratitude all rolled into one! I love the contrast of how your poem is effectively wordy about my six little radishes while I attempted to cram 525 years of recorded human experience on your gorgeously complicated three-eighths of an island into 12 short lines. And yes, we should definitely do this again!

Ruth, I love the speaker in this poem, and what the speaker is learning about embracing the moment, taking a bite out of every moment... and "this is where Heidi lives" makes me smile, because I like thinking of her in the radishes and dirt. :) Thank you! xo

Wowsa! I love this poem! It is such an important reminder to relish and savor those moments right in front of us. Now I think I will go out and pick some radishes for my lunch--and pay attention to the radish red and clumps of dirt and each crisp bite.

I love how this poem narrates the process and I love love love the last stanza - the idea of taking a bite of this moment, this radish right here. So evocative!

What absolute stunning VOICE here. Bravo! I want a radish too.....because you made me want one. And, I don't like them.

Ruth, this is an amazing poem of two homes far from each other. Both has descriptions unique to their areas but similar in that they the narrator is celebrating each. Radish red and like the essence of salad stand out to me. This poem took lots of care crafting it and brings a smile to the reader.

Boy, "reddish-red" and "cherry-red" they sure are and I love this and the entire matter-o-fact voice you have in your delicious poem–wonderful, and it's funny too, thanks Ruth!

Wow! This is a fabulous poem! I love how you wove the process into the piece, and also your reflection about how we experience our worlds and how we can be pulled away hither and yon by our thoughts. Your final stanza was perfect--grabbing and crunching into that radish. So earthy and powerful! I'm going to print this one out so I can enjoy it again and again!

You got a terrific and well-deserved response to this poem, Ruth! It's so you and so Heidi. Hooray for taking a bite!

Ruth, there is so much to love about this poem! For some reason, I adore the idea of you grabbing "a radish off of my computer screen" to take a bite. Wonderful!

One of my FAVorite things I've ever read of yours, Ruth - layers of wonderful here, and love the voice! "and then I thought here I go again, standing on a mountain,
looking at all the radishes in the world,
instead of at these radishes that Heidi sent me" - Oh how I can relate to that! But, maybe I am getting better. Thanks for all!

I love the surprise turn your poem takes!

I thought here I go again, standing on a mountain,
looking at all the radishes in the world,
instead of at these radishes that Heidi sent me

So true and so much fun to imagine that crisp radish.

I love this so much! Like Laura just said, the way you brought back the mountain and the distant view was just perfect. Like Robyn said, this is probably my favorite of all the poems you've written. Like Linda M. said, the VOICE!!

Makes me want to bite a radish, and I don't like the flavor of radishes!!

I absolutely *love* this, Ruth -- the short view, and the long, the urgency, the carpe-ing of the diem (I'm an expert in Latin, lol)!
You put me right in the moment, right in the crunch of the radish, and right, smack in the middle of wanting to see, touch, smell, and experience it all. Beautiful!