I've never signed up for any of Tabatha's poem swaps before, mostly because I was very intimidated by what I saw of them on people's blogs.  In theory, all you have to do is to send a poem to the person whose address Tabatha sends you by the date she gives you, but in reality people go all out, and there are fabulous packages that fly back and forth.  But then I participated in a swap Margaret organized, just because I was so intrigued I couldn't help myself, and it was so much fun that I wanted to do another one. This summer I was going to be traveling, so I signed up for two of the swaps. At home we just get mail delivery once a week, and you'd think that would work fine and I'd just take the extra time to do something really special - instead, I don't do anything until the afternoon of the day the mail went in the morning, and then I realize I've missed it for another week and despair at what a loser I am. Being in the US I knew I'd have access to daily mail service and I'd have no excuses.

I wrote poems on postcards and sent them to the people I was assigned. As expected, it was fun and satisfying. It gave me a little extra boost to follow through on a vague poem idea and actually write something. I was happy.

Then I got home from my trip, and when I checked the mail I realized how right I had been to be intimidated. Oh my goodness! My two poem senders did indeed go all out. Take a look at what I got:

My first swap came from Linda Baie. Linda is such a generous Poetry Friday participant. Her comments always make it clear that she has thoroughly read and digested your post, and she always finds something positive to highlight. What a great teacher she must be! She's a wonderful poet, too, and I always enjoy reading her posts.

The package she sent contained a card in an envelope, a notebook, a book of poetry (can't wait to read it!), and the poem. Linda wrote me a golden shovel poem, and for the quotes to end the lines, she used my own words. And look at the bougainvillea photo! One thing every writer needs is readers, and this poetry swap from Linda makes me feel as though I have a reader in her. 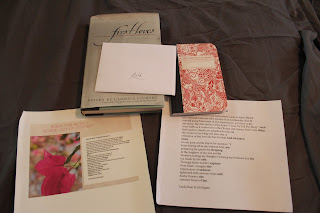 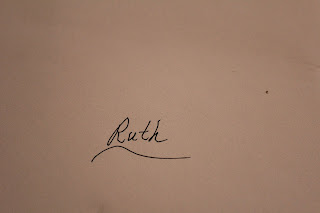 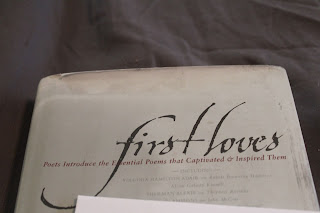 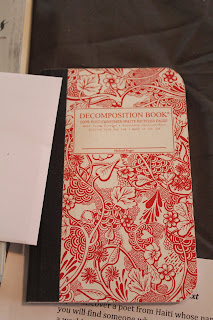 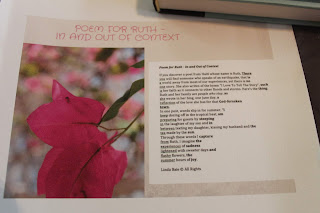 Here's the poem. (Click on the photo to get a larger version that will be easier to read.) Isn't it amazing?  Thank you, Linda! 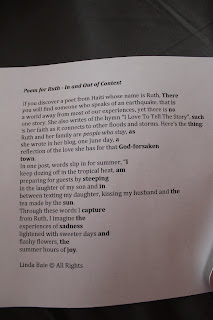 My second swap came from Tabatha Yeatts herself, the source of all this swapping. Tabatha's blog is called "The Opposite of Indifference," from Elie Wiesel's quote, "The opposite of love is not hate, it's indifference. The opposite of art is not ugliness, it's indifference." Tabatha is never indifferent, and many of the poems she posts - her own and those by other people - meet Emily Dickinson's definition of poetry as something that blows off the top of your head.

Like Linda, Tabatha wrote a poem that she knew would have special resonance for me.  Back in April I posted about madeleine poems, an idea I got from Nancie Atwell.  She got the name and the concept from Marcel Proust, who in one of his novels has a character eat a madeleine cookie and then be transported back into the past by the sensations and memories the cookie gives him.  The rest of the novel is a flashback caused by the taste of that madeleine.  I used George Bilgere's poem "A Madeleine" as my mentor text and then turned the whole writing process into a minilesson for my students.  You can read that post here.

So Tabatha's package contained her own madeleine poem, with a note and a gorgeous drawing by her daughter.  She wrote about picking black raspberries as a child and about how eating black raspberry jam brings back that experience.  She commented "It was easy to write and very difficult as poetry and memories are." That right there is the opposite of indifference, folks. 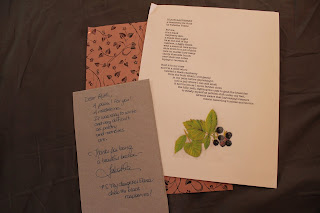 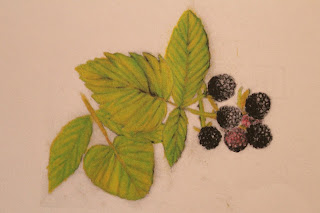 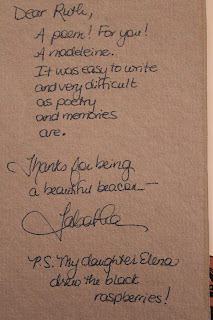 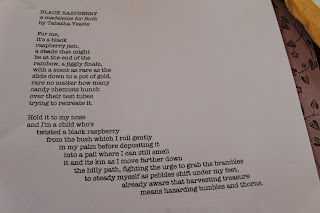 BLACK RASPBERRY
a madeleine for Ruth
by Tabatha Yeatts

For me,
it's a black
raspberry jam,
a shade that might
be at the end of the
rainbow, a jiggly finale,
with a scent as rare as the
slide down to a pot of gold,
rare no matter how many
candy chemists hunch
over their test tubes
trying to recreate it.

Hold it to my nose
and I'm a child who's
twisted a black raspberry
from the bush which I roll gently
in my palm before depositing it
into a pail where I can still smell
it and its kin as I move farther down
the hilly path, fighting the urge to grab the brambles
to steady myself as pebbles shift under my feet,
already aware that harvesting treasure
means hazarding tumbles and thorns.

Even though these poetry swaps do intimidate me (even more now than before!), I think I will participate in more of them because there is so much delight in the giving and the receiving.

So much delight!!! Yes yes and yes! Such gorgeous offerings here, and no need to feel intimidated... all is created in joy, and a gift is a gift however small or grand... I do love how personal the Swaps are, and how it helps me get to know Poetry Friday friends on a deeper level. And getting mail is THE BEST. So glad you've joined in! Thank you for sharing, Ruth! xo

Thanks for your kind words, Ruth. It was a pleasure to write for you. Tabatha's poem brings back many of our memories, doesn't it, and that knowledge "already aware that harvesting treasure means hazarding tumbles and thorns" made real as we grow older. Happy Friday!

Golden shovels are so difficult to write -- what an honor for Linda to create one for you!
No need to be intimidated, Ruth! You are a fabulous participant and I hope you join us again!

The summer hours of joy, the tumbles and thorns of memory. Ahhh. I also am intimidated by the swaps, but I plunged in this year, and I had fun with it. I'm glad you did, too. What great poems you got.

What a nice idea to swap poems. Thanks for sharing your experience.

I have been intimidated too. But, I love the thoughtfulness....receiving it is wonderful and it gives me ideas on how to be thoughtful toward others. So, once I started to think of the swaps as a student instead of a swapper, it became more fun. I do love how each poet shows how carefully they learned something about you and wrote in tribute to you. It's part of what makes our poetry community so wonderful. I was trying to explain this to a prose writer recently. There's just something really special about the poetry folks. I feel very fortunate to have found them.

Oh my, you are lucky indeed - two inspiring poetry swaps!

They're so much fun, these swaps. I'm glad you are participating. I think it deepens our poetry community.

What beautiful gifts, Ruth. Linda and Tabatha have written poems to treasure. Thank you for sharing them with us.

Oh, some day I should try, but intimidated? Oh my. I found your poem first at Tabatha's blog. Linda's and Tabatha's are also so richly detailed and Linda's so YOU and personal. Wonderful post. I just want to say I stayed about a mile and 1/2 from the Selby Gardens when my friends were living in Sarasota about 1. 5 years ago. I adored it there. So so pretty and beautifully done. I wish I could go back and I want to visit the Rigling Museum this time. But this winter I doubt it. We will be nannying again for the new baby boy who is arriving possibly on Aug. 1. Prayers for his delivery appreciated. She will be induced Tues. night, just like last time. I love how you wove in your missing eye-glasses to your poem, Ruth. You should not be intimidated in my opinion. Your poem is stunning. Hugs.
Janet Clare F.

I, too, am intimidated by what these swaps have become. I took a break this season to sit on the sidelines and enjoy it all vicariously.

I love this idea of swapping poetry. I look forward to participating in a future swap. What lovely poems and goodies you received. Thank you for sharing.

This is my first year to participate and I think it was Margaret's photo swap that also made me brave enough to try. It is intimidating! Both of the poems you received are so thoughtful and personal. I love how Linda used your words to inspire a golden shovel full of you and how Tabatha used your madeleine post and poem to spark her own. Wow!

Love love love. How wonderful to return from your travels to so much poetry love!

What lovely treasure-filled poetry swaps you received Ruth, and what fun you must have had unwrapping and reading them too, thanks for sharing al!