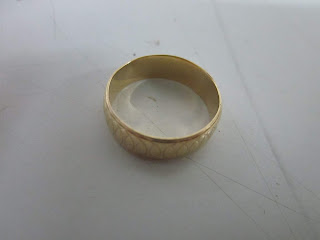 I had just sat down at my departure gate at the Fort Lauderdale airport when I noticed that my ring finger was bare. The ring I had worn every day for over half my life was gone.

My flight was going to start boarding in minutes; there was nothing I could do right then. And anyway, where would I start looking? It could be at the motel where I’d stayed the night before, or in the taxi I’d taken that morning, or at the airline check-in desk where I’d repacked my one checked bag into two, or at the security gate where I’d unloaded and reloaded the contents of my carry-on. It could be on the floor at just about any point along the miles I had covered since leaving home the day before.

As I handed over my boarding pass, found my seat on the plane, did the crossword puzzle in the magazine, my eyes kept returning to my bare finger. For 29 years I had rarely taken the ring off; occasionally to wash dishes, maybe, and for my two surgeries, but that’s about it. My finger looked strange, unrecognizable, without it.

I thought about going to the pawn shop all those years ago with my mother-in-law to pick up the rings, in a transaction which upon reflection may have been a little bit unromantic. I thought about our wedding itself, that steamy August day when we gave each other those matching rings. I thought about my brand new husband losing his ring down the drain of our student apartment when we’d been married less than a month, and then breaking the silver replacement I got him a few years later. I thought about our decision that our rings were lovely images of our commitment, but that losing or breaking one wasn’t an omen of anything. Still, I couldn’t help feeling sad that I’d lost mine, that the hint of shine that had been on my finger all those years through better and worse, richer and poorer, sickness and health, was gone now. Somehow the fact that it had happened in the soulless Fort Lauderdale Airport made it seem worse.

I’ve changed since I put on that ring for the first time. My finger is thinner, for one; I weigh less now than I did on my wedding day.  But there are other changes that aren’t visible; experience has made me sadder, more cynical. There have been losses and disappointments. Other experiences have been life-changing in joyful ways. I’m a mother now, for example; pregnancy swelled that ring finger for a while. I was heading away from one of my children as I sat on that plane and towards the other.

I finally arrived in the tiny student apartment where my daughter was spending the summer, and unpacked the goodies I’d brought from home for her. When I took everything out of my carry-on, to my delight, there was a glint of gold at the bottom of the bag. It must have fallen off during the TSA’s scrutiny of my belongings. It had been there in my bag all along: a happy ending.

If losing the ring isn’t an omen, you can’t turn finding it into one either. It’s just a piece of jewelry, no matter how deep the symbolism of the endless eternal circle, the true, pure gold. I let my sister-in-law wrap some thread around it for me so that it wouldn’t fall off my finger again. She said it was what high school girls do when they wear their boyfriends’ class rings that are too big for them. I like the idea of wearing my boyfriend’s ring, even though that boyfriend has been my husband for more years now than he wasn’t, and our daughter is the age I was when I got married to him, and we’re both gray-haired. Life has changed us. Not all the rings made it this far, but the marriage did. We’re still growing in love, making it work.  We're covering the miles, finding each other again and again. 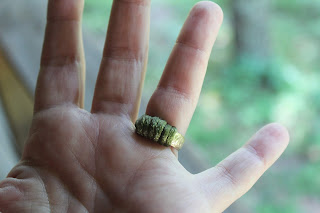 The perspective you've shared of the loss of your ring and thoughts of it through the years made me smile, Ruth. I am happy that you found it, but like that you saw it as a small thing in light of life's ups and downs in other times. It's a lovely and heartfelt post.

Ruth, powerful and it reminds us of the essence of what is real, what exists, what matters. Though I am glad you found it.Thank you for your wise words.

I'm so sorry I lost my ring, and I'm so happy you found yours. Ring or no ring, I'll love you forever! Thanks for a beautiful post!

Lovely thoughts. Kath and I bought 3 of our 4 rings at a Liverpool Pawn shop. We were students, so could not afford to buy new. Kath’s wedding ring was her grandmother’s handed down the family to her mother, who then gave it to me for Kath. We had an engagement ring each too, making the four.
Liked your reminder that they are just symbols of our commitment to each other, and do not replace it. ( my wedding ring finger is so much larger now compared with 48 years ago that I could not get it off without first removing finger! So I guess she is stuck with me!!!!)
D xx

Glad you found your ring, Ruth, but also glad you shared all those important thoughts when you thought you'd lost it. I lost the diamond out of my engagement ring somewhere around our 25th anniversary and had to come to the "it's just a ring" conclusion, too. It was replaced, but one of my wee garnets on my band fell out (many) months ago, and I've yet to get it fixed! (Did try one time but the jeweler didn't have the right size stone. I'll get to it eventually!)
Best wishes to your whole family.