Poetry Friday: Poems from my Daughter

I got a letter from my daughter last week. An honest-to-goodness, hand-written letter in an envelope with a stamp. It was such a lovely treat. And she included some poems in her letter. She had been reading the letters of Edward Gorey, the author and illustrator, and he really enjoyed Japanese poetry. Here are some poems that he shared with his correspondents, and that she shared with me: 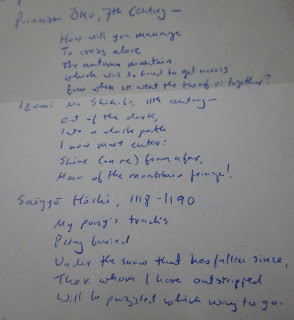 How will you manage
To cross alone
The autumn mountain
Which was so hard to get across
Even when we went the two of us together?

Out of the dark
Into a dark path
I now must enter:
Shine (on me) from afar,
Moon of the mountain fringe!

My pony's tracks
Being buried
Under the snow that has fallen since,
Those whom I have outstripped
Will be puzzled which way to go.

When I first typed Edward Gorey's name above, I added the adjective "Victorian," but when I looked him up I found he was actually much more recent than I had realized. He only died in 2000, so he was definitely not Victorian. (Edited to add my daughter's response when she read this post: "Victorian? He was a devoted fan of 'Buffy the Vampire Slayer'!") Still, he did come from a time when letter-writing was common. I would love a time like that to return, but in the meantime it made me so very happy to get this letter from my daughter!

Here's a time when she texted me a poem.  And here's another time.

What a delight to receive a handwritten letter from your daughter, and one filled with poetry! A treasure indeed. Thanks so much for sharing the poems with us.

My daughter adores Edward Gorey and I will share these with her, Ruth. It is lovely to receive a real letter! I love that final poem, a real mystery, isn't it? Is he bad or good?

How lovely to have a daughter that takes after your own heart.

It is wonderful to have received a hand-written book by your daughter, Ruth. I read through all of the posts you linked and did enjoy your poetry. I even tried to decipher the French wording by going back to my high school learning.

The Princess Ono poem reminded me of Ono No Komachi, who I think may be the same person? Komachi wrote:
I thought to pick
the flower of forgetting
for myself,
but I found it
already growing in his heart.
(Ouch!)
How nice to imagine the connective threads of poetry being strung between Gorey and you by your daughter.

I am assisting a workshop this weekend about writing from letters. How wonderful to find this post today to help me get my thinking around it. Letters with poems in them. Letters from your daughter. Gifts.

You and your daughter: a poem. Thank you for sharing this! I think it's because "Edward Gorey" sounds Victorian that we think of him as less contemporary! xo

Oh that is a delight to receive a letter from your daughter. Mine calls frequently--and sends Snap Chat messages--but not so much on the letters. (And I confess that I haven't quite figured out SnapChat as a communication medium, but I do enjoy seeing her pictures). I enjoy sending my daughter poetry, but she hasn't yet returned the favor.

Such sensitive poems you received from your daughter via Edward Gorey. Gorey had been a favorite of mine for as long as I can remember–both his writing and art. A few summers ago I had the wonderful opportunity to visit his home which is now a museum on him in Cape Cod. It's a real treat if you're ever able to go there, thanks Ruth!

Edward Gorey totally SOUNDS Victorian. :)
What a treat to receive not only a letter from your daughter, but poetry, too. :) Long live the mail service.

How special to receive a handwritten letter from your daughter! My mother has been going through old papers (in preparation for a move) and sometimes she tells me about letters of mine she's found. More often than not, I don't even remember having written them so it's nice to be reminded.

I love your daughter!

What a treasure! The letter and the daughter. ;0) And I love learning that Edward Gorey (whose work enchants me) was a fan of Japanese poetry.