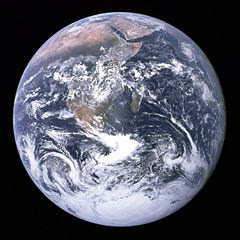 (Famous Blue Marble photo of Earth, taken from Apollo 17 and borrowed by me from Wikipedia.)

I have referred several times recently to dealing with culture shock/fatigue by pretending that the United States and the place where I usually live exist on different planets. The reason for this is that if I am constantly comparing the two places, it is hard for me to enjoy being here in the US. I see acres of clothing in a store and I think about the second-hand clothing sold on the street at home. I go to the library and start feeling emotional because I wish such a bounty of books was available to kids in my neighborhood. I even teared up at the park, and at Cheekwood, for the same reason. I can't avoid feeling overwhelmed some of the time, but I try to minimize that feeling.

Also, I often blurt out strange things that people don't understand. For example, once I was walking down the street in early August and a family was emptying the kiddie pool they had had in their back yard during the summer. As I saw the water flowing down the street, I felt almost sick. "Do they realize how many times they could have flushed the toilet with that water?" I started to rant. "Do they know how many people have to carry water miles on their heads, and they are just pouring it out on the street?" Fortunately, only my family heard this tirade. Comments like that tend to make people uncomfortable, in my experience. I say this sort of thing less often if I am doing my other-planet fantasy.

The fact is, I can't help thinking of the following passage from Tracy Kidder's book Mountains Beyond Mountains (great book, by the way).

He [Paul Farmer] went on writing his letter. I looked around. The airport, Charles de Gaulle [in Paris], has an angular, steel-and-glass simplicity, which struck me just then as frighteningly complex, which made me feel projected into a future I didn't understand. I thought of its duty-free shop, where one could buy first-class pâté, confit d'oie, grand cru wines. "You started that letter on a hike in rural Haiti," I mused aloud, thinking now of those arid highlands, of medieval peasant huts, donkey ambulances. "It seems like another world."

Farmer looked up, smiling, and in a chirpy-sounding voice he said, "But that feeling has the disadvantage of being..." He paused a beat. "Wrong."

"No, it doesn't," he replied, in a very pleasant voice. "The polite thing to say would be, 'You're right. It's a parallel universe. There really is no relation between the massive accumulation of wealth in one part of the world and abject misery in another.'" He looked at me. He'd made me laugh. "You know I'm being funny about something serious," he said.

One time I listened to Farmer give a talk on HIV to a class at the Harvard School of Public Health, and in the midst of reciting data, he mentioned the Haitian phrase "looking for life, destroying life." Then he explained, "It's an expression Haitians use if a poor woman selling mangoes falls off a truck and dies." I felt as if for that moment I could see a little way into his mind. It seemed like a place of hyperconnectivity. At moments like that, I thought that what he wanted was to erase both time and geography, connecting all parts of his life and tying them instrumentally between the gleaming corporate offices of Paris and New York and a legless man lying on the mud floor of a hut in the remotest part of remote Haiti. Of all the world's errors, he seemed to feel, the most fundamental was the "erasing" of people, the "hiding away" of suffering. "My big struggle is how people can not care, erase, not remember."

It's easier for me if I don't remember, if I don't think about the huge differences between the first world and the third. But I think Farmer is right. It's hard to live between worlds, but some days I have no choice. Because thinking there is no connection has the disadvantage of being...wrong.
Posted by Ruth at 7:16 PM

My gut response is always to feel defensive... I'm aware of the comparative wealth of this country, and the habits of waste. But... does that mean I shouldn't empty water out of the kiddie pool?

I guess my question is, what's the solution, living within a system filled with assumptions and mechanisms I don't necessarily agree with? Give to humanitarian causes, volunteer time if you have it, pray... What else?

The other thing is, a soul in a wealthy culture is as lost as a soul in a poor culture. In some ways maybe more so, to the extent that comfort masks true need. Compassion is needed for them too.

I'm not disagreeing with you. Just trying to figure out a better response than defensiveness. And maybe I stumbled on an answer: compassion for the different kinds of human lostness in both cultures is a common link between the two. I can't change the system, but I can cultivate a character that's fully human within it, and responds to all kinds of need. ?

That sounds distressingly abstract, doesn't it...

I understand feeling defensive - I feel defensive myself, since I can't enjoy pleasures here without guilt. I know I overreact to innocent things people do.

You're right that not all suffering is economic. People who are poor understand need and don't go through their lives in complacency. I don't know that people in this culture are any happier than people who live at a much more basic level.

But it's important not to romanticize poverty, either. Blessed are the poor, but there's nothing good about spending one's life hungry, or having a life expectancy that's thirty years shorter than in the developed world. Farmer's point is that there are structural inequalities that create the huge gaps between rich and poor in this world. Someone we were in college with went to South Africa for a year in the late 80s and when he came back he said he loved being there but he didn't think he could live there long-term because the privilege of a few was due to the suffering of the majority. I remember thinking then, that's the way the whole world is. It's just not as obvious to us all the time when we don't see the people who are working hard and having shorter lives so that we can have the luxury we have.

As far as a response - I struggle with this every single day. How to respond to poverty where I live, how to help without taking away people's dignity, how to encourage people to help themselves. And the frustration of doing my very very best to help someone in a specific situation, only to find that things are no better - or even worse - a couple of years down the road. I think struggling to figure it out is the best we can do. I'm not satisfied with that, but it's the conclusion I've come to.

Read that book and see what you think. Paul Farmer makes me feel defensive. He's someone who is really responding to the need he sees. He isn't perfect but he's doing what he can.

Don't you think that one reason people from the developed world often don't stay very long in very poor places is that it's just too exhausting to live in two worlds and that to save themselves they often have to return to the forgetfulness that their fellow countrymen live in with respect to the rest of the world? Because my personality is different from yours I find it frighteningly easy when I'm in the U.S. to forget my neighbors here (in Paraguay, in my case) and their poverty. One thing that makes that so easy is that I see people around me who are my friends and even people I respect who seem to spend very little energy every day considering the condition of the billions.

Yeah, Andy, you are right that it is exhausting to have that constant comparing going on in your head. And - I don't know how to say this without sounding judgmental - it seems when people come back from trips overseas they always say "It makes me appreciate what we have here so much more." That's a good start, a GREAT start, but I wonder how often it just stops there. It's so hard to see how we can make things different that we just put it out of our minds.

Thank you for sharing your heart.

I live here in the States, but I see waste all around that annoys me.

I saw a purse on clearance yesterday for over $1,000. I can't even begin to understand that.

Again, thank you for sharing from your heart. Saturday morning was spent in an upscale mall. Saturday night was spent at a homeless shelter. I understand your "Two Planets" title.

This is an interesting post and the responses have been equally thought provoking. I think I have a tendancy to romanticize poverty but I think that is because parts of me get envious for the simplicity of it, the lack of go go go mentality that seems to go with poverty. I recognize that living one day the way 80% of the world lives would probably cure any romantic notions I had. I so agree with the comment "A lost soul is a lost soul regarless of where they live." I've spent some time over the last month trying to look at poverty and wealth from God's perspective and that is one of the things I came away with. Lost is lost. Does poverty make it easier to find God? Don't know because I really haven't lived in poverty. Does wealth make it harder to find God? Again, I don't know but as an American who sees the daily access most Americans have to the Gospel and the way many choose to discard that message, you can't help but wonder if it does. The truth is probably somewhere in the middle: people come to God when they're ready and for each person this is different. Sometimes it seems like external factors weigh in on the timing of this, but perhaps it's mostly about God's spirit and God's people intersecting with the lives of those who need Him.
Kayla, adoptive mom to kiddos in Haiti