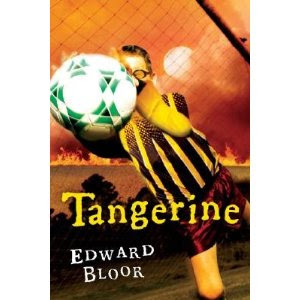 Book #47 was a potential read-aloud for seventh grade, Tangerine, by Edward Bloor. I chose it because it had a soccer theme, and I got the idea from the cover that it was funny, always a big plus with seventh grade read-alouds. But eighty pages into the book...

Sirens started to wail outside. Then the loudspeakers crackled to life. "This is Mrs. Gates. We are experiencing an extreme emergency. Please listen carefully and do exactly as I say. First, any injured student should come immediately to the office. No student who is not injured should attempt to come to the office at this time. All other students should move calmly and quietly to their afternoon bus stops or pickup points. School buses have already been dispatched to drive you home. If you cannot go home at this time, you should proceed out the front entrance and walk to the high school gymnasium."

Mrs. Gates repeated this speech twice more as I worked my way out the front door and turned left to my bus stop. I hooked up with Joey again there. He said he'd heard that there were kids with broken arms and legs all over the office.

A convoy of ambulances, police cars, and fire engines turned into the entranceway, their sirens wailing and their lights flashing...

OK. Can I really read this to students who were just in an earthquake? It's not an earthquake in the book, by the way, although a character initially thinks it is. Instead, a sinkhole has opened up under the school.

When the Haiti earthquake happened, I was in the middle of a read-aloud with my seventh graders called The Last Book in the Universe, by Rodman Philbrick. The story is set in a post-apocalyptic society where the infrastructure has been destroyed by the "Big Shake." On the night of the earthquake, one of my seventh graders who was on campus joked that this was the "Big Shake" that was destroying Haiti. Even though this is a great read-aloud with lots of discussion potential, at this point I can't imagine ever reading it to a class again.

But, back to Tangerine. As I kept reading this book, unable to quit reading it until I finished it, I decided that it would make a wonderful read-aloud. It isn't funny, at least most of it isn't, but it is about soccer, and it's about reinventing oneself, about the way kids perceive themselves and each other, about secrets in a family, and about middle school. And, incidentally, about kids who have to leave their school due to a cataclysmic event and find ways to fit in elsewhere. What could be more appropriate for my students?
Posted by Ruth at 6:38 PM