"And then I realized we had to drive all the way across Port-au-Prince." - Me

Last week I promised to take the camera with me to church today, and I did. I took over a hundred pictures and I have narrowed that down to a few to post. Remember that I took them out of a moving car with my point-and-shoot camera and my limited photographic skills. I got many lovely shots of the insurance sticker on the windshield and of my husband's hands on the steering wheel. If you live here and you know what our starting point and destination were, you may find our route odd. We had an errand to run on the way. My husband needed to have some tests done for his physical and had to drop off a, shall we say, specimen at the lab. I asked him if I could reveal this detail on my blog and he seemed surprised I would ask - almost as though everyone stops by the lab on their way to church to drop off little vials of biological matter. Sometimes we need reminders of what is actually normal behavior. 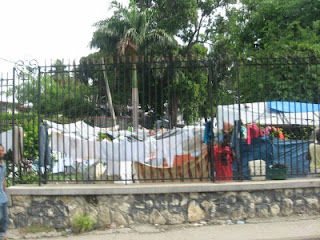 This is the Prime Minister's residence. Seven months after the earthquake there is still a large tent city in the formerly well-kept yard of this house. 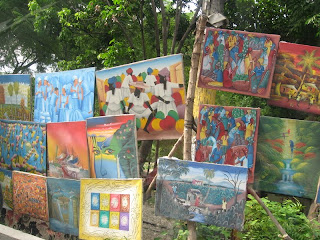 Some art for sale by the side of the road. Yesterday, passing the same spot, we saw the first "earthquake art" that we had seen, but my picture unfortunately doesn't contain it. The paintings showed lopsided houses and people on the ground. 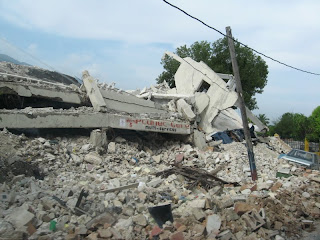 And then there is the real thing; often there are houses that look perfectly fine right next to flattened messes like this one that look as though nothing has been done to them since the day of the earthquake. 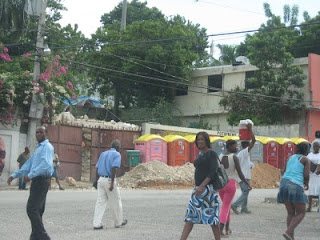 A row of public toilets on the street, for the use of the people in the nearby tent city. 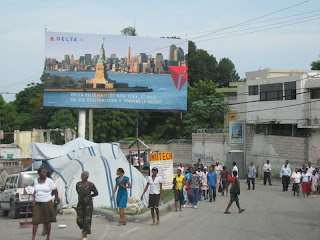 This tent is part of that tent city. It seemed poignant to me that these refugees live in the shadow of a billboard advertising Delta Airlines and its flights to the relatively nearby city of New York. There in the harbor you can see the Statue of Liberty with all she promises to the "huddled masses yearning to breathe free." 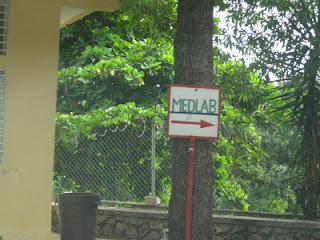 Quick stop at the lab. 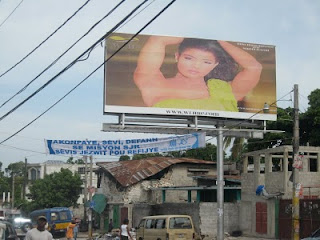 On our way again. Here's another billboard, this one showing Miss Haiti, who is going to participate in the Miss Universe competition. Sarodj Bertin is a lawyer as well as a beauty queen. Here someone tried to argue that Haiti shouldn't be participating in this competition because of the earthquake and you can read the comments to see what Haitian readers thought about that. The banner under Ms. Bertin's arms advertises the Jesuit Refugee Service. 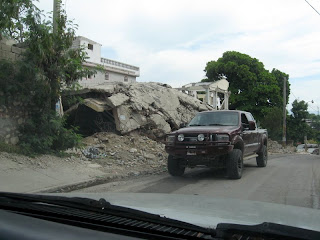 And another tent city by the side of the road. 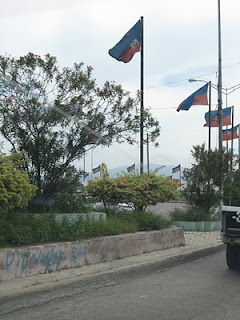 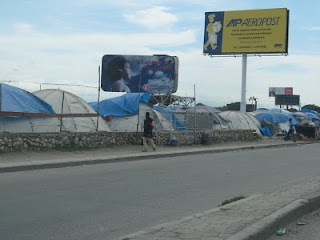 And here's the airport tent city. 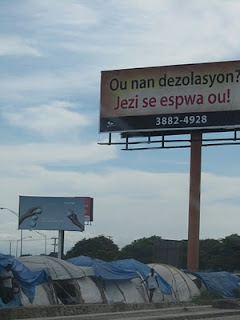 A billboard at the airport tent city asks if you are in despair and says that, if so, Jesus is your hope. There's a number you can call to talk to someone. 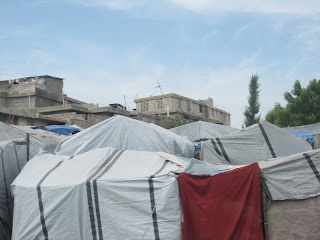 Another tent city by the side of the road. You can see from just these few photos that the quality of the tents varies wildly. 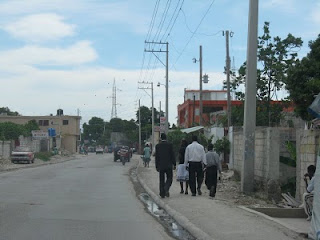 People walk down the side of the road to church. Of course they are beautifully dressed. They may have just come out of one of those tents, but they won't show it. 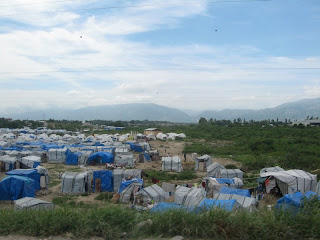 More tents. They are everywhere. 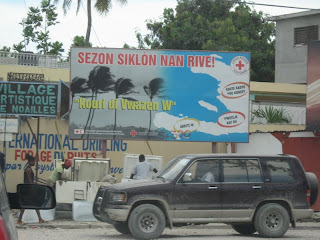 This billboard warns about the hurricane season. "Run and tell your neighbor," it suggests. Imagine a full-blown hurricane with all those people living in tents. Thankfully the season has been quiet so far. 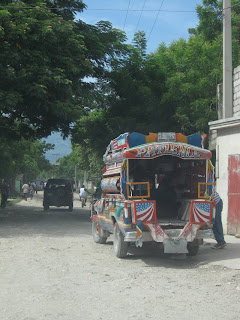 We're almost there. Here's a tap-tap waiting for passengers. 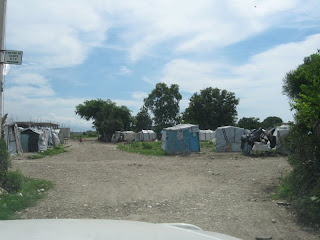 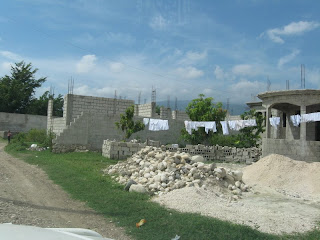 It's laundry day! Actually, this is pretty much how this neighborhood looked pre-earthquake. We're just about to turn in to where we will worship.

Church was wonderful; it is always a highlight of the week to get together to worship God with people we love.

I didn't take many pictures on the way home but I did want to show you some political graffiti, which is ubiquitous in this election year. I picked Wyclef, since he has been in the news lately. On Friday night the CEP (Conseil Electoral Provisoire) announced that Wyclef Jean, the hip-hop star, may not run for president due to his failure to meet the residency requirement. Today he said that he's not giving up and will file an appeal. 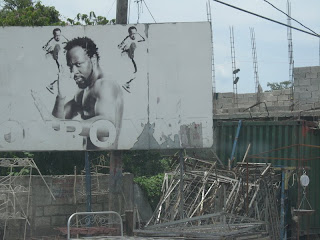 Here's the man himself, on a billboard advertising Cola Couronne. (Scroll down a little at that link to get past the Ghanaian soda, Pee Cola. Yeah.) 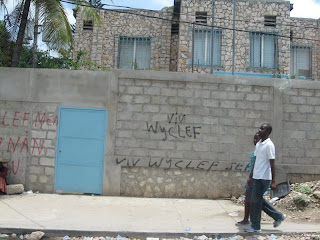 And here is some graffiti on the wall. It says "Long live Wyclef." In other places you can see, "We love you, Wyclef Jean," "Dear Wyclef Jean," and "Wyclef Jean, a good thing."

Thanks for coming along on our ride to church. Now I think we need a nap!
Posted by Ruth at 1:52 PM

I enjoyed that little tour! And I averted my eyes politely at the lab. :-)

If you still write poetry, I think you should write one about the tent city in the shadow of the Delta sign.

I agree with Janet - enjoyed the tour, waiting for the poem about tent city under the Delta billboard.

Prayers that hurricane activity stays away from Hispaniola!

Those photos and commentary were so interesting. The third photo of that building so destroyed really has me thinking.

Ruth, do you think the tents as a way of housing in Haiti are here to stay?