I spent last weekend at the beach. The ocean is timeless, even though we've warmed it up and filled it with plastic. The ocean helps give me a long-term perspective, a helpful gift in the middle of the news these days. This poem by Derek Walcott, a Caribbean neighbor, addresses both the timelessness and its limits. 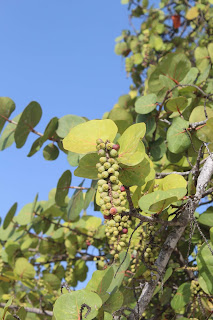 That sail which leans on light,
tired of islands,
a schooner beating up the Caribbean

for home, could be Odysseus,
home-bound on the Aegean;
that father and husband's

longing, under gnarled sour grapes, is
like the adulterer hearing Nausicaa's name
in every gull's outcry.

This brings nobody peace. The ancient war
between obsession and responsibility
will never finish and has been the same

for the sea-wanderer or the one on shore
now wriggling on his sandals to walk home,
since Troy sighed its last flame,

and the blind giant's boulder heaved the trough
from whose groundswell the great hexameters come
to the conclusions of exhausted surf.

The classics can console. But not enough.

Here's the poem, and you can read others by Walcott here as well. 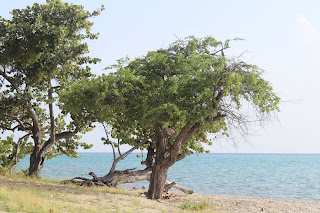 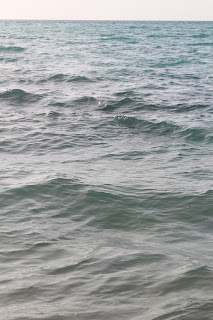 This poem takes me right to a movie we saw recently: ADRIFT. In the movie a woman is stranded on a boat alone for nearly 6 weeks... and survives. The ocean humbles us all... thank you, Ruth! xo

I love the sea, wish it were closer & that I could count on more than days in the summer. Sea Grapes abound where we've visited in Florida, but Walcott takes them into a new realm to me, and from you, it seems more timely than perhaps last week? "The ancient war/between obsession and responsibility." Thanks, Ruth!

I like how you say the sea gives you the long view...and the poet gives us the long view. That war between obsession and responsibility will go on and on while we walk through our days. Excellent choice this week. It pairs nicely with Irene and Catherine's blogs.

I'm not an ocean person, but the prairies of the high plains give me the same solace and perspective.

Ruth, I totally agree that the ocean is timeless. It allows for deep introspection for reflective individuals. I am also writing about this idea but in the form of a question poem. I have never seen sea grapes here on Long Island. May I capture your photo of the trees with the ocean behind it for The Art of Summering Gallery I am trying to wrap up this weekend? I would also like to add your quote the ocean is timeless.

I miss the ocean. Now that I live far inland, I find similar solace in the rivers that wind their way through our region--the water that flows from season to season and year to year gives me a similar perspective.

It's been too long since I've been to the ocean (six years, I think? Oh, far too long.)
Thanks for this today, Ruth. The ocean always makes me feel tiny and contemplative and hopeful somehow.

I do love the ocean, but leave it to me to find a home in the center of Florida rather than near the beach! Perhaps my wandering days are not yet at an end.

The ocean is my solace. Thank you for this.

I've always lived near a large body of water, and find much solace in all it's temperament. Thanks for this post with all it's washed up.