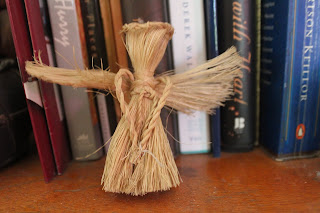 I'm writing this Poetry Friday post on Thursday, my second day this week staying home with a bad cold.  I croaked my way through my teaching day on Tuesday, drinking lots of water and sucking down cough drops, until at some point during the twelve or fifteen minutes of 8th grade Silent Reading, my voice gave out completely.  I tried to speak up to dismiss the kids to their next class, and there was just no sound at all.  I wrote "Folders" on the whiteboard, and pointed to the drawer where the students by now know to put them, and waved goodbye.

Tuesday's photo prompt (here's some more information about my daily photo habit) was "With Manual Focus," and, after looking up how to focus my camera manually, I took the above photo With Manual Focus.  It depicts a straw angel which I bought in a shop in Jacmel.  I bought it because the owner of the shop said the proceeds would benefit a program for nursing mothers, and also because I love it.  It sits on a shelf in my bedroom in front of a row of poetry books.  As I looked at the photo appreciatively this morning, my eye was drawn to that Derek Walcott book right behind the angel.  Her wing hides the end of his name.  I decided that this morning was the perfect time to take the book down and read some Derek Walcott, since someone else is dealing with my students at this moment, and I am here in the quiet of my room. 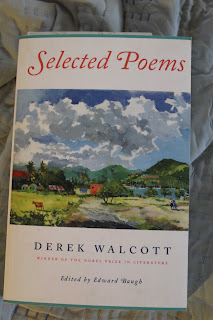 Here's something to share, from "The Prodigal," a book-length poem of which only a few excerpts are included in my book.  Walcott wrote about his travels around the world, away from his Caribbean island of St Lucia.  He always felt he was somehow being unfaithful to his home by traveling the world and seeing other sights.

In this poem from part 4 of "The Prodigal," Walcott is visiting Italy.

I wanted to be able to write: "There is nothing like it,
to walk down the Via Veneto before sunrise."
And now, you think: he is going to describe it.
I am going to describe the benediction of June,
the grey cool spring air, its ages at prima luce,
too early for coffee from the hotel
and from the locked grids of last night's cafés....

He's up so early because of jet-lag, and he's taking advantage of the morning to walk and observe, reflecting on the similarities of the scene with his home village, Gros Islet, when he himself gets observed.

...a man came out and examined me
as I copied the name down, a bald young man
in an orange windbreaker who scowled
because of my colour and the terrorists,
and because my village was unimportantly beautiful
unlike his city and the Via Veneto.
...
I lived in two villages: Greenwich and Gros Islet,
and loved both almost equally.  One had the sea,
grey morning light along the waking water,
the other a great river, and if they asked
what country I was from I'd say, "The light
of that tree-lined sunrise down the Via Veneto."

I love the way Walcott has captured the combination of feelings: delight in his surroundings, a sense of not belonging, insecurity about where he comes from (so unimportantly beautiful, his Gros Islet), and complete assurance that he does belong.  That light of that morning is his own country, whether his passport would acknowledge it or not.

Imagine if you asked someone what country he was from, and he launched into a description of the "tree-lined sunrise" as though writing an impromptu "Where I'm From" poem.  I can't decide if that would be irritating or endearing.  But I do know that I enjoyed reading Walcott in my "unimportantly beautiful" room, with sunlight streaming in my windows, and the calm assurance that my students were all right with a sub.  Perhaps there was a slight leftover of my nighttime cold medication adding to the sense of peace; there was definitely the fuzzy brain of a cold.  Tomorrow I will deal with the inevitable pile of papers I'll have to read when I head back to school.  For today, I'm from the light of my room on this goat-lined street of Port-au-Prince, with the fans droning and the stack of tissues by my bed and a book of poetry clutched in my hot little hands.

Carol has this week's roundup.

Beautiful poetry makes great medicine. If you have to be sick, what better way to spend the day! Hope you're feling better soon.

I once hear Walcott read his work and I've been a fan ever since. Feel better, Ruth!

Sorry to hear you've been unwell, Ruth, but glad it gave you time to revisit - and share- this beauty. I am far from home at present, in Hanoi, and the project I cam here to write aims to explore what it is to try to find belonging in a foreign land, so I felt you'd chosen this poem for me.

Oh, feel better, Ruth! Glad you are nourishing yourself with poetry... I do like the honesty in this poem... all those conflicting emotions. I'm always amazed at how TROUBLESOME travel is... it isn't all sunrises and mimosas, that's for sure! :)

"That light of that morning is his own country, whether his passport would acknowledge it or not." *happy sigh* Thanks for finding something cool to share, despite having hot little hands. Hope you're feeling better.

I hope today finds you feeling better, Ruth, yet yesterday seems as if it was a day of staying home with Walcott meant a day of wellness and contemplation. Your final sentence, starting with "For today" is a poem itself. I enjoyed every part of Walcott's poem & your own thoughtful words.

I like the way he addressed the reader and makes the twists and turns of the poem a surprise that writer and reader share.

It sounds like you spent the day the very best way you could!! ALMOST makes me want to play sick one day and spend it reading and writing. Hope you feel much better soon, though!

I am sorry that you are ill, Ruth, but happy that you have time to read poetry and reflect upon unimportantly beautiful surroundings that seem so lyrical in their composition.

Ruth, I am sorry that you are ill but on the positive side, you had time to enjoy your poetry reading. The poem you shared is filled with beautiful language and images and I can see why you would share it with us. Get better soon but enjoy the rest.

Oh, those summer colds are awful. But, look at the result of your time with Walcott. What new spaces you have in your mind and heart. Thank you for sharing the beauty.

Hope you feel better soon! I'm glad you had time to savor some poetry and share with us. Walcott is new to me, so I'm extra glad to read and enjoy his poem. I like thinking more of us than we realize might share a home of walking in the trees at sunrise no matter where we are.

Thanks for sharing this gorgeous poem with us Ruth, and introducing me to Derek Walcott–who brings so many layers into a single poem. I hope you are feeling better, I enjoyed your commentary and your light filled room too.