Book #71 of 2018 was The Summer Wives, by Beatriz Williams. I didn't especially enjoy this, and I don't think I'll look for any more of Williams' books.

Book #72 was The Lightning Thief, by Rick Riordan. I wrote some more here about how and why I picked this book. The second one in the series, Sea of Monsters, was book #78, and I'm reading the third one now.

Book #74 was Let the Great World Spin, by Colum McCann, about people unlikely to be brought together; all they have in common is the time in 1974 when someone walked a tightrope between the Twin Towers. Beautifully written and winner of the National Book Award.

Book #75 was The Girl on the Train, by Paula Hawkins. I hated this book. I didn't like any of the characters or care what happened to them, and I hated the loveless, nihilistic world in which they lived, or didn't live. I read more than half of it one night when I couldn't sleep, and needless to say, it was a terrible choice. I have no idea why I kept reading, and I don't think you should bother starting.

Book #76 was Haroun and the Sea of Stories, by Salman Rushdie. This is, to date, the only Salman Rushdie book I have succeeded in finishing. One of my friends from my writing group loaned it to me with high recommendations. I loved it, and it made me want to try some of the others again. 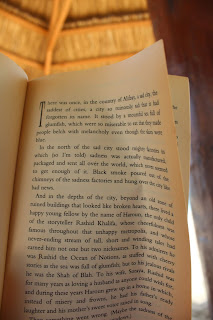 Book #77 was The Nightingale, by Kristin Hannah. I read most of this in the middle of the night when I couldn't sleep, too, and since it's about Nazi-occupied France and the Resistance, it was another poor choice for inducing restful sleep. While well-written and fascinating, it was also horrifying. And also, I'm tired of not sleeping.

Book #79 was a re-read, P.D. James' Jane Austen sequel, Death Comes to Pemberley. I gulped this down right after it came out back in 2012, and it stood up to a re-reading. It's better than most Austen fan-fiction, but the characters aren't as alive as in their original book, nor are they as alive as P.D. James' own creations. And yes, this too was partially read in the middle of the night.
Posted by Ruth at 4:53 PM