Yes, I Felt It

The USGS has a webpage called Did You Feel It?, and that's the question we're all asking today.  Did you? Many of us here in Port-au-Prince didn't feel the 5.9 magnitude earthquake because its epicenter was a long way north of us, but I felt it.  I was lying on my bed reading, and suddenly the bed started to move. I typed "Earthquake" on Facebook, and within seconds there were many other posts affirming that yes, that's what it was. I wasn't imagining it. My husband came upstairs immediately and asked the same question: "Did you feel it?" 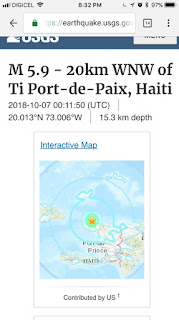 A Facebook friend in Cap Haïtien posted that it was raining there, but everybody was out in the street. A few minutes later someone commented that it was raining in 2010 also (not here in Port-au-Prince, it wasn't), and then that it was raining in 1842, referring to the major quake that destroyed San Souci Palace. Another northern friend recommended that nobody should sleep under a concrete roof, since you never know: is that it? Is there more coming? Will there be aftershocks, or, worse, was that a foreshock (yes, that's a thing) of something even bigger?

I don't mind admitting that I'm terrified of earthquakes. My floor-to-ceiling bookcase in the living room is bolted to the wall now, but I'll never forget the sight of it fallen on the floor in 2010, and my rocking chair where I nursed my son flattened in front of it. I'll never forget my husband coming home in tears after his first time driving in the city the day after, telling about bodies piled up. I'll never forget the sight of hundreds of Haitian people sleeping in the streets. My bed just moved a little last night, but all of those thoughts, and more, were immediately in my mind.

Oh, Ruth. So scary. Many prayers for you and all. So sorry for the loss of life.
Janet F.