I was reading this week about how a Great Blue Heron from Maine has once again come to Haiti for the winter. 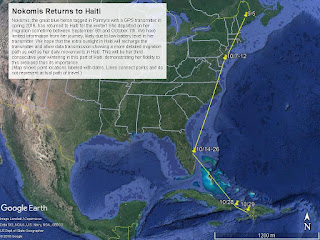 This is the third year that she has been tracked here. Here's an article about her from this year. Her name is Nokomis, which they got from Native American legend; most of us are probably most familiar with the name from Longfellow's poem The Song of Hiawatha. I started doing some research on Nokomis, and on Great Blue Herons in general, and before I knew it, I was writing a poem about her. I didn't intend to use the Hiawatha rhythm, but I couldn't seem to help myself.


Here's my poem, and I'll put a bunch of other links from my research at the end of my post.

Once they lost her, lost her signal,
lost connection with Nokomis’
solar chip transmitting data,
lost her to the world of flying,
bird of mystery, missing heron,
flying south to spend the winter.
It was scientists that named her,
for they didn’t know her bird name,
didn’t know the name her mother
gave her when she was a hatchling.
Named for Hiawatha’s grandma,
daughter of the wind, Nokomis,
tracked by people, flying southward.
They had lost her, she was silent.

When the weather warms, Nokomis,
she’ll head home to spend the summer,
leave behind her tropic island.
Till next year, then, Great Blue Heron.

Here's an article about how they lost contact with Nokomis back in 2016.
This article asks whether the Great Blue Heron is endangered. (I am so glad to be able to report that it isn't. And this link has a beautiful photo of the bird, too.)
Here are some photos from the Audubon Society in Venice, Florida. They call Audubon an "American ornithologist," and of course he was, but he originally came from our part of the Americas, since he was born in Haiti.
Here's another Haitian bird poem I wrote earlier this year.
Here's the website of the Heron Observation Network of Maine.
Here's the Wikipedia page for the name Nokomis.
And here's some more information on the Great Blue Heron.

Linda has this week's roundup.
Posted by Ruth at 4:17 PM

Joy, this poem story, this lyrical poem story & the back story you share,
are the pure joy we need today & every day.

It's such a great read-aloud, your tribute to this great blue heron.

Oh, what a wonderful adventure! I love how scientists thought they had lost her....and then found her signal. A wonderful poem, Ruth. Happy Thanksgiving.

I loved that movie a few years ago that showed so many birds in flight, migrating south for the winter. Wow! eighteen hundred miles! And different family members read Hiawatha to me and cousins often in my childhood. I'm not surprised that you write with that mentor singing in your mind, Ruth. Somehow I love these lines, denoting a challenge met and solved in a special place--your home!: "chip warmed by the sun in Haiti,/beak warmed by the sun in Haiti". Thanks for all the links! As I grew up, I was told that it meant good fortune would come whenever a blue heron was seen. Such beautiful and special birds.

Oh, what a wonderful story! I love how you've followed the rhythm and still made your poem original, informative, and compelling.

Oh, this is wonderful and I love the connection of a heron between us. I spent so much time watching them this summer and fall in Maine and I saw one just last weekend. I imagine if it knows of Nokomis's current location, it's feeling more than a bit jealous on this snowy day. I'm going to spend some time later checking out your links and rereading your inspired poem. Fabulous!

Wonderful! I do love me a great blue Heron! We see them nesting in 60 foot slash pines in a local park in Florida every spring. It's absolutely fabulous!

Beautiful and fascinating, too. We enjoy spying great blue herons along our river in the summer. Now I wonder how far some of them travel to visit other lands in our winter.

I am a huge heron fan. I think we will find all kinds of unexpected migrations...as the climate behaves differently, so will the animals (and crops).

I'm always in such awe of migrating birds. Did see a Great Blue Heron once in a wildlife park -- magnificent creature. Enjoyed your info-poem -- fascinating stuff.

What a joy to read about the blue heron and then come to your gorgeous poem, Ruth.

Lovely poem for the great blue heron. I've painted her, the little blue heron, and the green heron. I like all the history connections in your poem and the info about Hiawatha. Glad to hear this one isn't endangered, the little blue heron was a while back. Fun video on all the birds too–enjoy them while they winter with you. Here's a link to my little blue heron https://www.etsy.com/listing/103077101/little-blue-heron-greeting-card-by?ga_search_query=little%2Bblue%2Bheron&ref=shop_items_search_1

When I was in fifth grade, a million years ago, I had to memorize Pocohantas. Reading your poem carried me back to that classroom-- you captured the rhythm and told the story perfectly. I loved all of the other information you included as well.

Ruth -- Thank you for a lovely and poetically informative post about the GBH. I live in New England and never cease to admire these grand creatures. I actually did not realize they migrated that far! Whenever I see them up close, I see the bird-dinosaur connection, too! -- Christie

Love your poem and learning more about this great blue heron's journey. Now I'm wondering where the heron that left the swampy end of our lake in Michigan is spending the winter.

OK. So I missed this post. Wow, Ruth. You really nailed this poem. Sweet Nokomis! Great Blue Heron. Who knew they could fly all the way from Maine. I wondered where he stopped enroute! I remember hearing Hiawatha as a child. I was young and I liked the rhythm and gitche gumee always made me kind of laugh and wonder if indeed it was a real place. My mother would read poetry. I wish she had read more poems over and over. I am thinking I may share some of this with my grands soon.
Janet Clare F.
I hope find some evidence of Nokomis and what may have happened...but sounds kind of doubtful.