Book #80 of this year was Nyxia, by Scott Reintgen. This book is very readable and kept me turning pages, but I did find some of the scenes difficult to follow. I'm not sure teens will have the same problem with it; I always tend to glaze over a bit in descriptions of fights, whether in the Iliad or a contemporary YA novel. In this book, teenagers are chosen to go to space and mine Nyxia, a substance which is essential to life in the future world of the setting. They have been recruited by a huge corporation and there's apparently something fishy (still unexplained) about all of it. But their families are promised huge sums of money in return. My favorite part of the story was the relationships among the teens, who, although they are competing with one another, still form alliances and friendships.

Book #81 was The Cuckoo's Calling, by Robert Galbraith, and #85 was the second book in the series, The Silkworm. As everyone now knows, Robert Galbraith is actually J.K. Rowling. I enjoyed these first two books, and I hear that they get less gory soon, so I'm looking forward to that. The main characters, Cormoran and Robin, are wonderful, and the development of the recurring characters is always what I like best in detective novels.

Book #82 was The Titan's Curse, by Rick Riordan. This is the third in the Percy Jackson series. I definitely get what my students see in these books.

Book #83 was a reread - in fact, I've read it several times already. It was Rob Bell's How to Be Here.  I wrote some about it here.

Book #84 was Tool of War, by Paolo Bacigalupi. I wrote a little bit here about what led me to this title. Tool is a half-man/half-beast "Augment" created in a futuristic society to help people fight wars. But what's the difference between human and non-human? How much is our biology our destiny? What's the nature of choice and free will and instinct? This and many other questions are addressed in this book, which is also graphically violent and not the kind of thing I usually read at all. I thought it was absolutely brilliant. 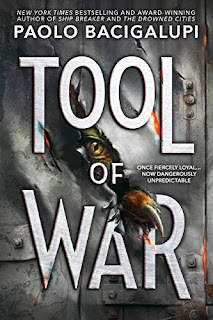 Book #86 was The Hate U Give, by Angie Thomas. This is also now a movie, which I haven't seen. It's a story about police brutality, in all of its complexity.

This post is linked to this week's Saturday Review of Books at Semicolon.
Posted by Ruth at 1:00 AM