Book #6 of 2019 was A Million Little Ways: Uncover the Art You Were Meant to Live, by Emily P. Freeman.

"Eternity is not for later," Freeman writes."God weaves eternity into our minutes. Every day, he is creating minute after minute, and he hands us the grace we need for each one as they come. Worry and anxiety show up when we try to rush ahead into the minutes that haven't been made yet. There is no art in anxiety. We try to manage the future, a time that doesn't even exist yet, and we wonder why it makes our stomach hurt."

This is a good book; I recommend it. Freeman has a lovely voice and her words are encouraging.

Book #7 was Unsheltered, by Barbara Kingsolver. I had had this on hold at the library since it came out, and was still bazillionth on the list, so I was so excited to get the hardback book from my husband and son for Christmas. I am a huge Kingsolver fan and have read all her novels. This one is written from a similarly pessimistic worldview as the last one, Flight Behavior, but it is also oddly uplifting. It's as though having accepted that the world leaves us unsheltered, we can go on to make honest, loving lives. The narrative goes back and forth between two time periods of life in Vineland, New Jersey, one in 2016 when the world is basically falling apart for Willa and her family and friends, and one in the nineteenth century when the world is basically falling apart for Thatcher Greenwood and his family and friends. I loved so much about the book: the scene where Willa's husband's (young, female) student shows up at the house and she and Willa have an awkward conversation; the love scene between the (very) long-married couple; the affectionate yet angry relationship between mother and daughter. I see all the examples I had marked in the book were in the modern sections, and that's not surprising, since I liked that section better, but the nineteenth century story is good, too. Thatcher Greenwood is friends with his neighbor, Mary Treat, a scientist who writes letters to some of the great minds of the day, including Darwin. Mary Treat was a real person, and several of the incidents in this part of the book really happened. Similarly, the modern part of the story includes the 2016 election and some of the associated events. 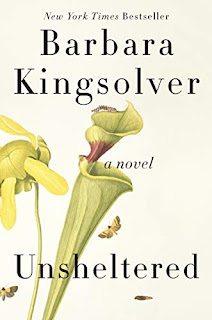 Book #8 was The Dark Flood Rises, by Margaret Drabble. This book depressed me in a way Kingsolver's didn't. It's about aging and dying, and while it's well-written, it didn't seem to contain even as much hope as Kingsolver's pessimism. I followed it with an equally depressing book, #9, The Perfect Nanny, by Leila Slimani. Spoiler: she's not the perfect nanny. The thing I liked best about this book was that it was set in Paris, and I enjoyed the very French feel to it, even reading it in its English translation.

Book #10 was a re-read, How to Survive a Shipwreck: Help is on the Way and Love is Already Here, by Jonathan Martin. (This was at least the fourth time of reading it. It's so good. I wrote about it here, here, here, and here.)

Book #11 was The Leavers, by Lisa Ko. In an early chapter of this book, Deming asks his mother,

"'Are you going to leave me again?'
'Never.' His mother took his hand and swung it up and down. 'I promise I'll never leave you.'
But one day, she did."

This book is about immigration, moving from one culture to another, cross-cultural adoption, ICE, loss, trauma. It's about belonging in two places. Do you have to choose? Can you be both? It's about trying to be OK with the kind of love people are able to give you, whether or not it's the kind of love you really want from them. Are you worth loving? If someone leaves you, does that mean you don't matter any more? I will be thinking about this book for a long time. When I finished it, I was excited to find a rich conversation at the end between Ko and Barbara Kingsolver. Here's Ko on her book: "There's this melting-pot fantasy in the United States that immigrants can seamlessly melt into the dominant culture while simultaneously bestowing it with a dash of flavor - a recipe here, a restaurant there. But in reality, assimilation can be a lot more violent." (She's talking about psychological violence, not physical violence, and the victims of the violence are the newcomers, not the people already in the United States.)

That's a lot of good reading already this year! I'm looking forward to February's books!
Posted by Ruth at 1:34 PM