My daughter has lived in the desert this year. It's the first time she's lived somewhere I haven't been, and I squint at the rare photo she sends in an effort to understand what she experiences, what she sees. I don't know her friends, I don't know her life.

Each day I look at the temperature where she is and groan at how hot it is. (Yesterday it was 109 degrees.) "It's a dry heat," yes, but it's still unbelievable. She says you can't comfortably go outside during the day. I read an article about how homeless people die every year of heat in her city; air conditioning is nearly a necessity.

This past week I have thought a lot about deserts. We had several days of a dust cloud from the Sahara hanging over our normally idyllic blue skies. Here's an article about it. Experts named the cloud "Godzilla." It's a regular phenomenon to have desert dust in the atmosphere, but this was the thickest in fifty years, and this was the first year I was aware that they actually gave it a name. I read that we could expect extra beautiful sunrises and sunsets, but that turned out to be false; we couldn't see anything in the sky except grey, or feel anything but oppressive, heavy, heat. The Ministry of Health took a moment from their Coronavirus updates to tell us to be careful of this dust; don't exercise, stay indoors, wear your mask (at least you have a mask - see, it's multipurpose!). Now Godzilla has moved on, but reportedly we will get some more effects from it tomorrow.

I've also been reading poems about deserts, in a book called A Nostalgist's Map of America, by Agha Shahid Ali, a poet from Kashmir who wrote in English and became a U.S. citizen. He merges all the deserts of his life in his poems. Although I've been trying to learn more about him and read more of his work, I find my favorite poem so far is still the first one of his I read, "Snow on the Desert."

I had hoped to travel this year to visit my daughter and to see her home, but like so many things we'd planned, it didn't happen. I have to imagine what it's like, using my various source materials, and unfortunately those materials include articles about how COVID-19 is spreading there and how there, as everywhere in the US now, people are marching against their local examples of violence. 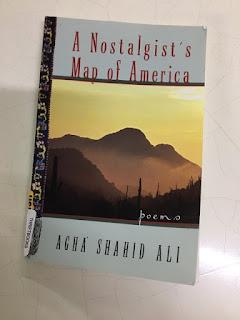 I bought a used copy of Agha Shahid Ali's book, and it's clearly been a textbook, judging by the marginal notes, some of which seem a bit confused. Here's my favorite example: 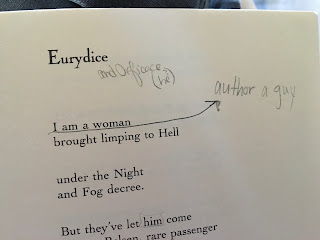 I imagine the professor explaining in passing, "Eurydice, the wife of Orpheus..." and then assuming comprehension from the students, but this student has scribbled, "and Orficace (he?)" and then after the first line of the poem, "I am a woman," added, apparently a little bewildered, "author a guy."

This summer I'm locked down, but it also feels a bit like wandering in a desert, a desert where I don't see a clear path and I don't get all the references in the poetry (Orficace?) and it's hot and hard to breathe.

Here's today's roundup. And over at Kat's blog, she's sharing some Summer Poem Swaps, including some I sent her. You can read them here.
Posted by Ruth at 11:47 AM

Love this post! Your desert will not last forever. Praying you'll find many oases during this season.

Ruth: It feels like another planet at times, when our dear ones are away and we imagine their life. Thanks for this post... Oriface and all!

The poem references "The Desert Smells Like Rain", a book I know by a Gary Nabhan. My students & I visited the desert in Tucson & then into Mexico, the Sonoran Desert & read that book together. I loved experiencing the desert, so very different from where I love, even simi-arid and certainly from where you live. It was hard to see that people had yards that were filled with prickly cactus, couldn't imagine a child playing there. But there were beautiful things, too. I love the poem, Ruth, & wish you could have visited your daughter, hoping all of us can get to our friends & family again.

It does feel like wandering in the desert, doesn't it? I'm in it with you.

Ruth, I know it's so difficult to know your daughter is navigating a foreign terrain within the threat of this pandemic. I imagine you holding tight to your faith as you and all of us pass through this desert. May a sweet reunion happen sooner rather than later.

is thawing from longing into longing..."

For me, it's a beautiful image that the frozen longings of so many are now melting and joining together to form a mighty river. May this new river of longing feed the desert we've been wandering in.

I thought of you when I heard about the dust cloud. Snow In the Desert was as mysterious and unusual as the Saharan desert in the sky over the tropics.

We are all wandering and the fact that our sunlight is the past during a time when the future is more unknowable than ever somehow unmoors us in time.

Our younger daughter lives in Cyprus, a semi-arid island...I'm not a fan of deserts--they seem totally alien to me. I'm sorry life seems rather a desert right now. I think that's a sadly apt metaphor...hugs to you, Ruth!