Book #27 of 2020 was The Glass Hotel, by Emily St. John Mandel. I loved Station Eleven, which I read back in 2016. This one didn't resonate quite as much with me because of the subject matter, a financial scandal, but it is beautifully and brilliantly written. I will definitely read more by this author.

Book #28 was a pandemic-related re-read, Doomsday Book, by Connie Willis. I first read it back in 2014, and current events brought it back to my mind, so I started looking through it, and got pulled in. Trigger warnings galore with this one. The setting is a future Oxford University (2054) where time travel has been figured out and is a regular part of life for historians. Even though the Middle Ages has been given a blanket rating of ten (too dangerous to visit) for time travel, Kivrin wants to go there. There's a virus outbreak in 2054, university politics, and then the country of the past: all of them make this fascinating reading. What was it like fighting a contagious illness at a time when so little was known about how it all works? I feel as though I could answer that question by just describing what's happening around me. As I type this, I can hear a large, raucous church gathering singing joyously in my neighborhood. I'm happy they're joyous, but I wonder about the germs they are sharing, as the number of cases of Coronavirus jumps here in Haiti each day.

Book #29 was Fragments of Light, by Michèle Phoenix. I loved this novel, and felt privileged to read an ARC of it. You can find a full review of it here.

Book #30 was The Gospel of Trees: A Memoir, by Apricot Irving. Apricot's parents were missionaries in the northern part of Haiti, and as an adult, Apricot takes an unflinching look at what happened to the family, to their aspirations and missionary goals. She writes beautifully, and she has a lot of courage.


Here's a sample: "The evacuation had torn a hole in the narrative. The missionary confidence that we were hope-bearers, shining with Christ's love had been replaced with a fundamental uncertainty: Were we even wanted? There was a palpable sense of failure in the room."

A bonus for me in reading this book was meeting the character Suzette Goss-Geffrard, a person I have met in real life. At a time when everyone is reflecting on social media about their experiences with racism, I think about working with Suzette as a colleague at the school where I teach here in Haiti. At that point in my life I had lived only a few years in the United States, and I understood very little about the history of racial issues and what it was like to live there as a person with dark skin. I also thought I understood it all, having grown up in Kenya. Suzette very patiently and kindly undertook my education, and explained many things to me which I very much needed to hear. In this book she comes across as a fantastic teacher, the first one to tell the author that she would be a writer. For me she was a fantastic teacher too, and though I very rarely see her these days, I am grateful to her.

Book #31 was The Firebird, by Susanna Kearsley. I'm a sucker for books where people can read each others' minds. Communication - real communication - is so challenging in real life, and I guess that's why it's so appealing to me to imagine being able to just step into other realities through thoughts. The Firebird of the title is a piece of art, and Nicola, the main character, who works for an art gallery, is trying to find out more about it - actual proof, as opposed to the knowledge she has about its history just from touching it. In the process we learn about the history of the Scottish in Russia. Did you know there even was such a history? I sure didn't! I liked this and will look for more by this author.

Book #32 is another pandemic-related choice, Devotions Upon Emergent Occasions, by John Donne. You're probably already familiar with the best passage from this book, Donne's most famous piece of writing, beginning, "No man is an island, entire of itself; every man is a piece of the continent, a part of the main," and ending "never send to know for whom the bell tolls; it tolls for thee." But the whole book is like that, with those endless, lyrical sentences. Donne wrote these meditations while he was seriously ill, and it kind of reminded me of fever dreams I've had before, when everything seemed to fit together and make sense. In his case he can also write incredible sentences with truly enormous amounts of scripture in them, but I also found his points were often hard to remember when I was done, just like insights when your fever breaks. By reading this I learned the word "pestiducts," which is another way of saying, "disease vectors," but a much better way, I think you'll agree. (Usage: Since we are all potential pestiducts, we wear masks when we go out in public.)


Here's a sample from this book: "We say that the world is made of sea and land, as though they were equal; but we know that there is more sea in the Western than in the Eastern hemisphere. We say that the firmament is full of stars, as though it were equally full; but we know that there are more stars under the Northern than under the Southern pole. We say the elements of man are misery and happiness, as though he had an equal proportion of both, and the days of man vicissitudinary, as though he had as many good days as ill, and that he lived under a perpetual equinoctial, night and day equal, good and ill fortune in the same measure. But it is far from that; he drinks misery, and he tastes happiness; he mows misery, and he gleans happiness; he journeys in misery, he does but walk in happiness; and, which is worst, his misery is positive and dogmatical, his happiness is but disputable and problematical: all men call misery misery, but happiness changes the name by the taste of man."

Vicissitudinary. I mean, you have to love that, right?

Book #33 was The Street of a Thousand Blossoms, by Gail Tsukiyama. I read this one aloud to my husband, which took a while because it is 422 pages long. Set in Tokyo, it spans the time between 1939 and 1966, and follows the careers of two brothers, one a sumo wrestler and the other a maskmaker for traditional Japanese Noh theater. This is a beautiful book. I could have done with less of the sumo description, but that was my husband's favorite part. My favorite part was watching the people of Tokyo go through the trauma of the war but then recover from it. Tsukiyama does a masterful job of showing the way past experiences live on in our minds, but how we can sometimes transcend them. 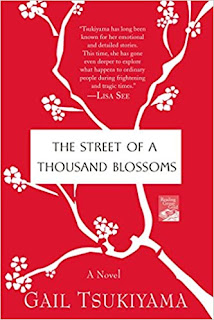 Donne’s book sounds fascinating in the context of being written while he was gravely ill. And those are some big, rare words he’s using!