I looked up, and there was a bird in the tree. It was big, the size that would normally move the branch, drawing my attention to it. But this bird was absolutely still. Its eyes were closed. It was sleeping.

Since it was so still, I could examine it closely through my binoculars, and I did. Its face was whiskery. Its beak drooped downwards. "Drooped" seemed a better word to me than "hooked," though that word came to mind too. Its markings reminded me of snakeskin, or bark. The coloring blended right in with the branch where the bird snoozed. Its tail was sort of squared off at the end. I took some pictures with my phone but they were terrible, too far away, useless to show any of the details. I scrolled through the Merlin app looking for pictures that resembled this bird in the least, but I couldn't find any. What on earth was it?

Two guys saw my husband and me staring up through our binoculars and they came over, eager to help. "Zwazo," one said wisely. Bird. Yup, I knew that already.

We watched the motionless bird for about half an hour, but finally decided we needed to leave. In the car, I scrolled Merlin some more, and then grabbed the book I'd brought with me, Birds of the Dominican Republic and Haiti. A friend left it for me when she was evacuated to the US at the beginning of COVID. I opened the book, and there, there was the bird, the exact bird I'd been staring at. There it was, looking at me from the page, because in the picture the birds, male and female, were awake. 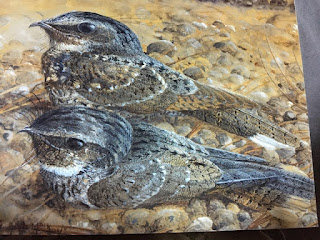 Source: Birds of the Dominican Republic and Haiti, by Latta, plate 32
The book calls it the Hispaniolan Nightjar. Merlin (where I did finally see some photos, though the photos weren't as perfect as the drawing) called it the Greater Antillean Nightjar. It's nocturnal, and during the day they sleep on the ground or on a tree branch. You don't see them very often. The book and app described it better than I had. "Sometimes called 'goatsuckers,' from the ancient myth that at night these birds use their gaping mouths to rob goats of their milk, causing the udders to dry up and the animals to go blind" (book). "Note white-tipped outer tail feathers, silvery moustache and eyebrow, and pale-spotted belly" (app). "The birds use their huge, bristled mouths to engulf nocturnal insects on the wing" (book). I listened to the song on the app, and concluded that I'd probably think it was a frog or an insect if I heard it. The book described the sound as a "plaintive, frequently repeated pi-tan-guaaaa, reflecting its local name." The Spanish name in the Dominican Republic is Pitanguá, and here in Haiti they call it Petonvwa Peyi, or, in the far more likely event that you ask people who never saw one before, Zwazo. Bird.
I keep thinking about that bird, the odds against me looking up into that tree at that branch, the much greater likelihood that I'd walk by without seeing it. I think about that book, newly mine because my friend moved away. I think about the way I'm birdwatching and writing my way into making sense of the events of this year. The way the birds were always there, before I started paying attention to them, and go on, unaffected by COVID and all human worries. The way my husband takes an interest in the birds purely because I'm interested, looks through my old binoculars while I use the upgraded ones he bought me for my birthday. The way my knowledge expanded a little bit as I identified that bird and added it to my life list. Greater Antillean Nightjar. 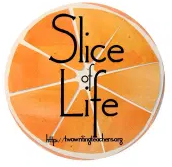 Ruth, I think COVID has heightened our awareness of things around us... small details and life we may not have had time to "see" before, as well as connective threads and impeccable timing in things coming our way just as they are needed. Fascinating account of the Zwazo. Each day holds its unique gifts ... this post is one of today's for me! Thank you and Merry Christmas :)

I truly love this piece. Birdwatching comes to people because of age or interest or circumstance. Here, it is a combination for you.
We can all understand the realization that we noticed something quite rare and special we might easily have missed.
Somewhat of a metaphor for these times. Thank you for the reminder to be aware.

Nature sings to us sometimes ...

Merry Christmas to you and yours!

Nature is fascinating. I love that you followed through to discover what this bird was. Notice and note, the job of the poet.

Ruth, It is wonderful that you looked up at just the right time to see this bird. It's almost as if it was meant to be there for you to examine, connecting all these pieces of your current place and time. I wish more of us would take the time to slow down and notice what is around us. And, then, take it once step further, as you did to learn about something which you did not already know. I hope your birding list grows long in 2021. Take Care & Happy Holidays!

Such wonder everywhere. I loved the patience I felt as I read your description. The bird sounded so peaceful.