I haven't written any poems in Paraguay yet. I haven't written much of anything, just some text messages and a couple of emails. That's not so surprising, since I haven't even been here a week, but Wednesday was the twelfth anniversary of the 2010 earthquake in Haiti, and I wrote nothing about that except a Facebook post. And also, I haven't written anything yet in 2022. Or since I left Haiti in the middle of December.

My OLW for the year is BEGINNER. I'm starting over in many ways, and apparently writing is one of them. But I did bring some raw materials with me, some baggage (oh, WAY too much literal baggage), and a whole bunch of words I already know in English (even though I don't know nearly enough yet in Spanish). One of the things I unpacked this week was my word magnet set given to me by my friend C. when she left Haiti last April after 10 years, wrapping up her life there in 48 hours. (I at least had six weeks to wrap up 25 years.) I've been thinking of these words, magnetized to the fridge and the kitchen cabinets in our temporary apartment (along with a metal frog from Haiti), as a metaphor for the materials I have to work with. 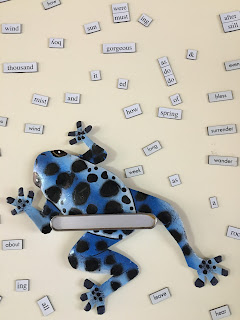 My husband put some of them together to make a poem: 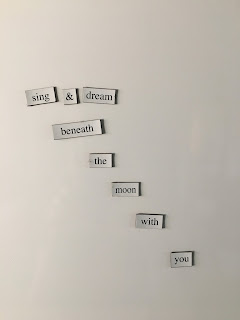 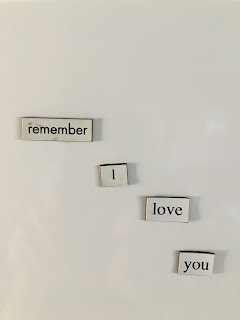 And in the meantime, here's today's roundup.

You are gathering material, Ruth. The poems will come! I like Steve's.

Hi Ruth, I'm glad you arrived safely and are unpacking. Moving is a lot to take in, and then there's all that's been going on… And what a great item to unpack your word magnet set! Love your husbands poems to you. Here's a quick poem for you from frog and me, and the sea of words,
Spring mist
how I long and wander
after a long week
even still
blessing
all…
And hey, you are writing this post, and found a OLW with beginner, I look forward to hearing more from you and your OLW, thanks, xox

I, like you, have not been writing, or been near my computer much for numerous weeks. And I am completely out of the loop - did not know about your move. I can only imagine the myriad of emotions you've been experiencing. What I do know is that your husband is a treasure, and I am so glad that he is there, loving you with his beautiful words. Take care, Ruth. x

"Beginner" is a good stance for all of us, though you are experiencing it at a greater depth than an ordinary person. Right now you are in "take it all in" mode, but there will come a time when you are ready to process and "get it out there" with writing. Enjoy this sponge time. Squeeze only when it's time.

Ruth, I admire you...adventurer, pioneer, poet. Collect those words in baskets, bags, and boxes. The poetry will come. I know you well enough to bet on that. Thanks for the hello from your new place. I'm so glad to see you've landed and are save with someone who arranges, "remember, I love you." on the fridge.

I love this in many ways. It's quite a transition and how brave are you? Happy settling in.

Ruth, when you move it takes time to get everything in order, including your writing. I have to admire you for picking up and moving to another far away destination in short notice. Your husband's poems are tender and touching. May your lives be enriched in your new locale. Your OLW will guide you on your journey.

How wonderful that those magnetic words can be a bridge for you and your husband between your old home and the new one that you are beginning to make. Wishing you the best as you begin to settle into your new home.

Hi Ruth, thanks for coming by my post. I didn't realize you had posted! It's wonderful to hear a voice from you, no matter prose or poetry, & I love your husband's words, a comfort every time at the fridge! Certainly you are always on my mind, hoping much is going well for you & your husband, "beginning". I love seeing your posts on FB!

Ruth, these magnet words are lovely, as is your OLW. Please be compassionate with yourself. Your mind and heart are probably bursting at the seams with all that's going on. Your poems will begin emerging soon, I have no doubt. <3

Look at that frog--hanging on for dear life, or tucked in safely, or ready to leap from its perch? Beginner. A good place right now.
Will you be teaching? Or do you get some time to rest and regroup? Keep an eye on the birds, in either case.

What delight to find these words on the fridge during such a time of upheaval! Glad you were able to bring the words and the frog with you. I imagine they are helping you feel at home in your new setting. I remember telling my husband when we moved here 24+ years ago that this house didn't like me. Hoping that you can "begin" the settling in and getting comfortable in your new home soon!