Back in February 2006, those of us in Haiti thought things were scary. Little did we know what scary even meant. One of the events that month involved a crowd marching up to the Hotel Montana and storming it to protest election results. Here's a news story with some details about what happened that day.

This poem, which I wrote at the time, is not at all intended to be a political statement; I just started to imagine what it must have been like for someone from Cité Soleil to see the beautiful place that was the Hotel Montana. The poem does have some political overtones but I hope they won't bring back any bad memories of those times. The last thing I want to do is cause pain to anyone in Haiti, so please read this poem as simply a tribute to Hotel Montana and to how beautiful it was.

I have many other memories of the Hotel Montana. I never stayed there, but a friend spent her wedding night there. I've eaten there many times. I swam in that famous pool. And just a few weeks ago I went to the beautiful new plaza they were building. Journalists used to stay there and do their reports from the roof, with its wonderful view of the city and the bay.

Today it is smashed, crushed, gone. And the Hotel Montana is only one place that was destroyed, one of so many. So many people are gone too. And for those who are left, lives that were already hard are infinitely harder. 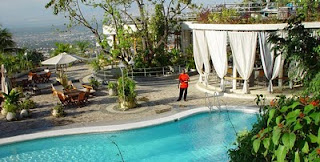 by Ruth, of thereisnosuchthingasagodforsakentown.blogspot.com

After we had marched all day
Shouting about voting and chanting the name written on our T-shirts
We came to Heaven.
It was just as I had always imagined it -
The big gates that we had to push on,
Fighting to get into the celestial city
(We who come from the city of the sun).
And when we got in
You would hardly believe how beautiful it was.
There was a pool
Like the ocean but clean,
Blue like a huge Culligan bottle
How many buckets were carried on how many heads to fill that pool?
Maybe the angels did it.

And then I jumped in
And the water frothed with joy as we splashed it on each other
And some people reclined on heavenly deck chairs
And some explored the many mansions.
After a while they threw us out, so
I guess it wasn't really Heaven.

They always used to say that democracy was a flood
But the flood washes everything down the mountain
(Down to us in the city of the sun),
All the debris from other lives in better places.
If I had my choice, I'd pick a democracy like that pool,
Where everyone could jump in
To cool off from the heat of the sun
And you wouldn't have to shove your way in
And no one would shriek and rush to drain the pool
And you could play in the water instead of carrying it all the time. 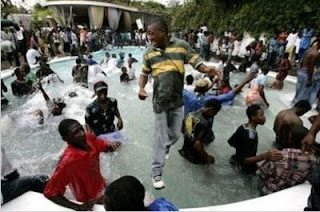 Here's an article about the collapse of the Montana, including some photos of what it used to be like.

Today's Poetry Friday roundup is here.
Posted by Ruth at 5:00 AM

I don't have any words, but I couldn't leave without letting you know how moving this is.

beautiful poem- so much truth here.

Thanks, friends. It's scary to me to share my poetry so publicly, but then I think about what my friends and colleagues in Haiti are doing...!

Heartbreaking and poignant: you describe the Hotel Montana as Heaven, and Heaven now lies in a heap of rubble...

I SEE the devastation on the news, but you help me to FEEL it in my heart. Thank you for taking the risk to share your poetry.

Dear Ruth, our fearless grade 7 teacher, please write a book, poems included!
We love you, miss you & stand in prayer with you.
(let me know when the book gets published!).
Thanks for sharing your heart.
Beth