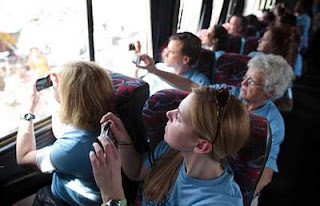 A Haitian friend posted this article on Facebook yesterday and commented that she didn't like it much. Maybe, she said, she was being oversensitive.

Well, first of all, the title: "Haiti: Horrific Beyond Expectations." It does tend to make a Haiti-dweller feel a little defensive. After all, fifty percent of the rubble has been cleaned up! After all, lots of the tent cities have been cleared! (Where did all those people go, though?) The feeling reminds me of when friends visited us in our first Haiti apartment and walked around shaking their heads sadly, repeating over and over, "Oh, you guys!" in sympathetic tones, as though they could hardly imagine that we could live in such a hovel. I'd complained about it some myself, but I didn't want them to think it was so very dreadful. Maybe they could have tried, "We love what you've done with the place!"

It's an uncomfortable paradox. I want people to know how bad things still are for earthquake survivors in Haiti. I posted about cholera yesterday myself, after all. I'm glad President Carter (one of my heroes) and the Habitat people are here. I recognize that there's still a lot to be done to return Haiti to the way it was before the earthquake, and then it was far from perfect. On the other hand, though, I don't want people - outsiders - talking about how horrific it is here in this quirky, awful, beautiful place. (And yes, I'm an outsider, too, even after living here fifteen years. I know that.) The article even uses the word "godforsaken." Folks, don't you know there's no such thing as a God-forsaken town? Then, too, I always complain when the US media ignore Haiti, and then complain when they write about it, too. Is there no pleasing me?

I find myself making snorting sounds in my head as I read. Apocalyptic movie set? Please. Tap-taps aren't air-conditioned? Well, boo hoo! Spotty electricity? Let me tell you about spotty electricity. It's way better now than it was when I first came to Haiti, when the country was under an international trade embargo, spearheaded by the United States - an embargo from which Haiti's economy has never really recovered.

At the same time, though, I have to say that the descriptions are not wrong. There is a lot to be horrified by in Port-au-Prince. Too many people are living in squalid, miserable, inhuman conditions almost two years after the earth shook. And the worst of it? People were living in those conditions before the earth shook. You just couldn't see them so clearly from the main roads as you drove from the airport. And I, with my self-righteous snorting, don't live in the conditions of the tent cities, nowhere close. I consider myself quite resilient, from "sturdy peasant stock," as I always say, and I know there is no way I could live the way people have been for nearly two years, basically in public, in steadily disintegrating tents, with no sanitation.

I just want to say to those people from Omaha: So, here's Port-au-Prince. Do you like what we've done with the place? We're all working to fix up our own little corner. There's still a lot to be done, as you can see. Thanks for the help you're bringing. I'm glad you think the Haitian people are amazing - you're right, they totally are. I hope you know that they don't really like having their picture taken unless they're all dressed up. They're not that thrilled with their situation, either, and they feel a little sensitive about people driving past them in tour buses taking pictures. (But I drive by and take pictures too. I get it that you have to document it, before you get used to looking at it.) I hope you get to eat some delicious Haitian food while you're here, and attend a Haitian church service and hear people praise God like you've never heard in Omaha, I'm betting. And again, thanks for coming.
Posted by Ruth at 1:40 AM

Thank you for posting this -- thank you for your whole blog, really. Since the earthquake and finding you through LLL, you've open my eyes to Haiti and to living as an inside-outsider in a country full of love and despair so bound together you can't tell where one starts and ends. I love what you've done with the place.

Well said, CrumpetsInCamelot. I was thinking the same thing. The only thing I would add to your comment is, "Thank God there is no such thing as a god-forsaken town." And, thank God for this blog. It gives me a perspective that I would not otherwise have on a country I would not have ever even noticed.