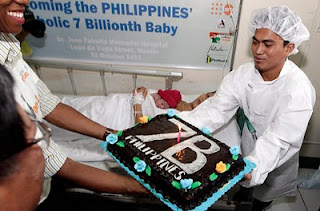 On Monday, the world's population hit seven billion. Of course that day was just chosen randomly to represent the seven billion mark; nobody really knows exactly how many people there are in the world. It's estimated that 382,000 babies were born worldwide on Monday. But a baby girl in the Phillipines was chosen as the symbolic seven billionth baby and given a cake and a gift certificate for shoes. One pair of shoes? Shoes for her whole life? It doesn't say. And she's not going to eat the cake, but maybe her mother got some of it. It may be just me reading my own experience into this photo, but I don't think that mother looks very thrilled to have cameras around as she lies there in her bed cuddling her baby. I think she's thinking, "Go away and leave me alone with Baby Seven Billion." She's quoted in this article as saying, "She looks so lovely."

Here's an interview with the UN Population Fund Executive Director, in which he reflects on this milestone for the planet and looks ahead to the time when there will be eight million earthlings. When asked what advice he would give all the babies around the world, he doesn't give any advice at all, he merely states enigmatically, "I wish them interesting lives." Interesting seems a given. But how come only Danica gets free shoes?
Posted by Ruth at 3:00 AM