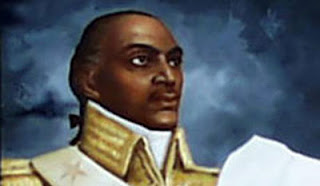 Today we have the day off school. November 18th commemorates the Battle of Vertières, a decisive victory over the French during the Haitian Revolutionary War, so I decided to post a poem about Haitian history. The Haitian revolutionary leaders captured the imagination of the romantics, including Wordsworth, who wrote a poem about Toussaint. Toussaint didn't fight in the Battle of Vertières, but after you read the poem, scroll down to read more about his story and how his influence affected the will for victory of his fellow freedom fighters.

TOUSSAINT, the most unhappy of men!
Whether the whistling Rustic tend his plough
Within thy hearing, or thy head be now
Pillowed in some deep dungeon's earless den; -
O miserable Chieftain! where and when
Wilt thou find patience? Yet die not; do thou
Wear rather in thy bonds a cheerful brow:
Though fallen thyself, never to rise again,
Live, and take comfort. Thou hast left behind
Powers that will work for thee; air, earth, and skies;
There's not a breathing of the common wind
That will forget thee; thou hast great allies;
Thy friends are exultations, agonies,
And love, and man's unconquerable mind.

Actually, Toussaint was already dead by the time the Battle of Vertières was fought. Here's a passage about the time leading up to the battle and a description of the battle itself. You can read it here at its original website but if you do, there will be a lot of loud martial music playing while you read, so I've cut and pasted it below.

"[T]he capture of Toussaint, one of Leclerc's primary agendas, would help shatter the revolutionary spirit of the rebels in Napoleon's mind. But, what Napoleon didn't know is that by capturing Toussaint, he would simply pave the way for a ferocious Jean-Jacques Dessalines who was fighting not against the restoration of slavery, but for the total independence of Haiti.

On June 7, 1802 Toussaint Louverture was captured during a conference set up by General Brunet. There have been different theories surrounding Toussaint's kidnapping. However, whatever the view, a captured Toussaint was believed to be Napoleon's biggest mistake due to the fact Toussaint was considered the most moderate among the rebels' generals. [Toussaint died in prison in France in April of 1803.]

The toughest and meanest of the Black Generals, Dessalines, was chosen commander in chief of the indigenous army at a meeting of the army high command. According to historians, Dessalines' unshakable position was pursuing a war of extermination until the enemy is driven to the sea. "Koupe Tet, Boule Kay" (Cut their heads, and burn their houses!) was Dessalines' strongest order. He had no room for prisoners of war.

Meanwhile, General Leclerc would later succumb to the deadly yellow fever and was replaced by his second-in-command General Rochambeau in a desperate attempt to put down the revolt. By early October 1803, Dessalines's bloody offensives against the French forces had generated results. Port-au-Prince, Les Cayes, Le Cap fell under the control of the slave army who fought their last battle at Vertières on November 18, 1803. Haitian General François Capois later called "Capois-La-Mort" had also proved himself as a fierce and unshakable fighter among the rebels as heavy cannon bullet killed his horse. The Black fighters attacked ferociously the remaining French soldiers, and the latter, demoralized, defeated, and numbering no more than 3,000 were driven back to Mole Saint-Nicolas, where they gave up to a fleeing British fleet rather than facing the wrath of Dessalines' forces.

This event marked the end of slavery as well as Napoleon's plan to conquer North America. Haiti was born and the first black independent nation in the new world was established on January 1st, 1804.

The Haitian Revolution served as a model of courage. It sent tremors throughout the Caribbean and the United States slave plantations. Therefore, many slave revolts were sparked in the Caribbean including the Lesser Antilles such as Dominica, Grenada, St. Vincent, Guadeloupe, St. Lucia and Jamaica. In the U.S. the leaders of the three largest slave revolts, Gabriel Prosser (1800), Nat Turner (1822) and Denmark Vesey (1831), were inspired by the success of the Haitian Revolution. In addition, the most profitable aspect of that revolution was the purchase of the Louisiana territory by the United States for $15,000.000 (15 cents an acre for more than 2 million sq km (800,000 sq mi) of land extending from the Mississippi River to the Rocky Mountains).

Napoleon Bonaparte had to cede Louisiana to Thomas Jefferson, then President of the United States, as he realized without Haiti he had little use for Louisiana where he wanted to extend a great French Empire. He also needed funds to support his military ventures in Europe as he was facing renewed war with Great Britain. This greatest real estate bargain of all time more than doubled the size of the United States, making it one of the largest nations in the world. There is no way that Napoleon would have surrendered New Orléans and all of Louisiana to Thomas Jefferson but for that Haitian Revolution. If Haiti had lost the war in 1803, many could indeed acknowledge that the United States might be different today!

Nevertheless, not that many people know about such this extraordinary event that took place more than 200 years ago and changed as well as redefined the world. The Haitian Revolution connects to all those whose people were enslaved or whose lands were colonized. The November 18, 1803 battle is still reverberating today and reminds us of real freedom although Haiti has been paying for it ever since."

Today's Poetry Friday roundup is here, at The Opposite of Indifference.
Posted by Ruth at 3:30 AM

Wonderful poem, Ruth! The ending in particular. And the image you chose is great. Thanks for sharing this bit of history with us!

Thank you for sharing, Ruth. Fascinating history, and I didn't know about this Wordsworth poem (or, likely, forgot it from college!).

Fascinating post, Ruth. Toussaint's deep caring for his country's and his own personal freedom is moving.

I discovered this poem recently -- sometime in the last year. It was while we were studying Haitian history. (Or at least, part of it...) I think the last 4 lines are wonderful.

I always love finding those connections in history, the what ifs. Thank you for telling about the man, the background, & the historical significance.

Thanks for these (poem ad history lesson) today! I teach my students about Toussaint and the revolution in Haiti in my American history class - such an interesting man.

Thank you, Ruth. You have been part of my education today. I have not realized how American history is so connected to the Haitian Revolution. I like this like a lot:
"There's not a breathing of the common wind
That will forget thee."