Book #4 of 2021 was Bellwether, by Connie Willis. I had had this one on my Kindle for a long time, since my daughter had recommended it while she was still in high school. For whatever reason, I hadn't read it yet. It's very entertaining and fun. In these posts, you can see my views on other books I've read by Connie Willis.

Book #5 was Holes, by Louis Sachar. I had read it before, long ago, apparently before I started blogging. I'm now reading it with my sixth graders. It's such a fun, intriguing read.

Book #6 was Monet, by Vanessa Potts. The book contains 120 of Monet's paintings from all stages of his career, with commentary on the subject matter and the technique. My daughter gave me this, and I enjoyed it immensely. 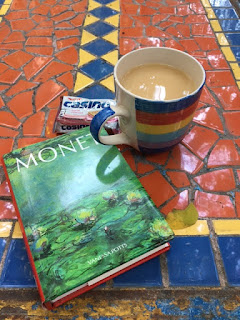 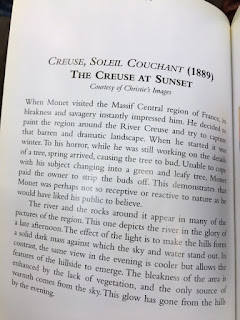 Book #7 was The Red Lotus, by Chris Bohjalian. I found this very absorbing. A woman goes with her fairly new boyfriend on a bike tour in Vietnam. While they are there, he disappears. Now she has to figure out what has happened to him, and it's much deeper and more involved than she could have imagined. I don't know how to give the kind of trigger warning that might be necessary without giving away the story, so all I'll say is that the protagonist is an ER doctor, so there are medical descriptions and themes.

Book #8 was Pillars: How Muslim Friends Led Me Closer to Jesus, by Rachel Pieh Jones. Rachel's last book, Stronger Than Death, was terrific, and that link is to my enthusiastic review. It's a biography of Annalena Tonelli, an Italian humanitarian who fought TB in the Horn of Africa and was killed right after Rachel herself moved to Africa. Here's the first line of that book: "On October 5, 2003, in a country that didn't exist, Annalena Tonelli performed routine checks on tuberculosis patients."

In my review of Stronger than Death, I commented that I loved how Rachel brought in her own story into Annalena's. That personal connection was, for me, a highlight of the book. So I was really happy to read this new one, where Rachel explores her personal experiences in Somalia and Djibouti even more. The book is organized around the five pillars of Islam, Shahadah (Confession of Faith), Salat (Prayer), Zakat (Almsgiving), Ramadan (Fasting), and Hajj (Pilgrimage). Basing her descriptions on extensive reading but also on many years of experience living surrounded by Muslims, she explains how these practices affect people's lives, and how she has learned from them in ways that have deepened her own Christian faith.

What I love most about this book is Rachel's refusal to accept easy answers. She and her family have been through many difficulties in their time in Africa, but they have also made Djibouti home, after being suddenly evacuated from Somalia. Rachel's love for her adopted homeland and its people shines through, but she doesn't gloss over how challenging life is there, either. And she rejects clichés at every turn.

Here are some tastes:

"Before leaving the United States, ten months earlier, I had flippantly remarked that the safest place for a Christian was in the center of God's will, how it was better to move across the planet to a potentially hostile location than to spend three days in the belly of a whale. . . . Later I would understand God's will as an inherently unsafe place to be. It hadn't been safe for Jesus; it led him straight to torture and death. God never promised safety, no matter how I craved it."

"I tried to have a garden in Somaliland, which is how I did just about everything there - a whole lot of effort and tears, and two beans and a miniature cucumber to show for it. On my knees in that sad little garden, my fingers caked with the earth of a place I was trying to transform into hoe, was where I figured out what a disaster life in the Horn of Africa was going to be and where I realized what a massive mistake I had made. . . . I wanted it to display metaphors of faith and spiritual life - and I didn't mean metaphors of failure, weeds, and fruitlessness. I wanted beauty and miracles, nourishment and one seed dying to produce a harvest. I wanted to bite into a fresh green bean and delight in what I had nurtured into being. I wanted it to come through my own fingertips, out of this thorny, rock-strewn soil, and I wanted success the first time I tried. Instead, my garden was an utter failure."

"I used to take Jesus' words, 'You will always have the poor with you,' as something vague. Somewhere, out in the wide world, there will always be poor people. Once I knew poor, hungry, homeless people, and struggled to know how to respond, I saw the words as a threat. You will always have the burden of figuring out how to deal with the poor, and you will always fail in your response. Then, I grasped his words as a call. ...My Somali friends, had they read Jesus' statement, may have seen it as a promise. There would always be opportunity to give, there would never be the risk of living with unabashed greed."

If these passages find you reaching for a highlighter, you will love this book. I recommend it if you want to know more about Islam, but also if you are interested in life as an expat in general, particularly in countries with few resources. I recommend it if you are interested in thinking more about Christianity, and about how people can have relationships with others who believe very differently from themselves. It's deep, heartbreaking, and beautifully written. It's based in profound relationships with friends Rachel clearly loves, relationships she doesn't try to pretend aren't sometimes awkward and difficult.

This book comes out in April, but you can already preorder it on Amazon here. 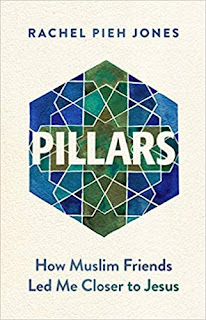 Book #9 was Dear Haiti, Love Alaine, by Maika Moulite and Martiza Moulite. Alaine Beauparlant is a Haitian-American living in Florida and attending a Catholic school.  She gets into trouble at school after a presentation goes wrong, and gets sent to Haiti to do volunteer work and redeem herself. She was born in Haiti but hasn't lived there. Figuring out how to adjust to Haiti would be challenging enough, but she is also faced with many other obstacles: her high-powered TV journalist mother is acting very strangely, there's apparently some sort of family curse, and she kind of likes one of the other interns in the office of the Minister of Tourism (the Minister happens to be Alaine's aunt). There's a lot going on in this book - sometimes it feels like too much - but overall I enjoyed Alaine's voice and her adventures. This book is going on my shelf in my classroom, where my students are always looking for YA books about Haiti.

Book #10 was Girl Meets God: On the Path to a Spiritual Life, by Lauren F. Winner. I thought I had read this before, but I don't think I ever have. I liked it, though I prefer some of Winner's more recent books, especially Wearing God. I checked this book out because I'm in a group studying The Artist's Way, by Julia Cameron, and in the latest chapter she recommended "Reading Deprivation." I was telling my daughter about it, and expressing my view that I would never be able to do it, and certainly not for a whole week, and she told me that Lauren Winner had given up reading for Lent once. I wanted to read about her experience, and ended up finishing the whole book. I still am not convinced to give up reading, but her arguments, and Cameron's, make some sense. Here's to reading about giving up reading, as opposed to actually giving up reading!