Book #11 of 2021 was The Illuminator's Gift, by Alina Sayre, the first in a series of four books called The Voyages of the Legend.  It's the story of Ellie, an orphan who has lived with, and been abandoned by, several families. She joins the crew of the Legend, a flying ship, and learns that she has a gift as an Illuminator. I really enjoyed this book and will read the rest of the series.

Book #12 was Booked: Literature in the Soul of Me, by Karen Swallow Prior, a memoir in books. Prior links events in her life to books she loves. I was left wishing I could take one of this professor's classes.

Book #13 was Braiding Sweetgrass: Indigenous Wisdom, Scientific Knowledge, and the Teachings of Plants, by Robin Wall Kimmerer. This was a beautiful combination of botany and poetry, with a bit of indigenous linguistics, cosmology, and parenting thrown in.  I was reading a library edition, so I took four pages of notes before it disappeared from my Kindle, but I really need to buy my own copy. Although I didn't expect it, the book cast light on my word for the year, Flourishing. It is full of pictures of how North America once flourished, when its caretakers had a different view of flourishing than the current occupants of most of the continent. "All flourishing is mutual," Kimmerer writes. My favorite part of the book was her imagined meeting of Nanabozho, the first man in the Potowatomi origin story, and Linneaus. Nanabozho, like Adam in the Bible, is tasked with naming all the species. "I like to think of the two of them walking together. Linneaus the Swedish botanist and zoologist, in his loden jacket and woolen trousers, with felt hat cocked back on his forehead and a vascular under his arm, and Nanabozho naked but for his breechcloth and a single feather, with a buckskin bag under his arm. They stroll along discussing the names for things." I looked into Kimmerer's other book, called Gathering Moss, which I want to read as soon as possible, and found some negative reviews explaining that there's too much philosophy and poetry in this book purported to be a guide to mosses. Then I knew I really must read it as soon as possible. Braiding Sweetgrass was one of those books that refocused the way I see the world. I won't forget it, and I will be rereading it.

Book #14 was American Street, by Ibi Zoboi. This brilliantly written novel is the story of Fabiola Toussaint, a Haitian girl who moves to the United States with her mother. In the airport in Miami, her mother is detained, and Fabiola goes on by herself to join her family in Detroit. There she meets a world that is as tough, in its own way, as the world she left behind in Port-au-Prince. In addition to the people she gets to know, she notices the presence of the spirits she serves in her vodou practice. While I think this book is aimed at an older audience than my eighth grade student who was reading it (that's where I learned about it), in its own way it is a work of art. Trigger warnings for substance abuse, gang violence, really strong language, and, well, spirits.

Book #15 was Fever 1793, by Laurie Halse Anderson.  This is an award-winning book which tells the story of the Yellow Fever epidemic in Philadelphia in 1793. Since it's aimed at young readers, the horrible details of the suffering are muted a bit, but the book is thoroughly researched, and I found it highly readable and affecting. There's an appendix full of information about the historical period. Can't get enough of reading about disease during a pandemic? I know! Me too!

Book #16 was Sing Down the Moon, by Scott O'Dell, the story of the Long Walk, when the Navajo people were forced to leave their land in 1865. This book came out in 1970, and a very minimal amount of research taught me that many Native American critics now find it unworthy of being taught to children. Here's a podcast I listened to that goes into some of the issues. One teacher quoted tells how she reads it to her students, who are Navajo (now called Diné), because it makes them laugh so hard. They just can't believe someone could write so inaccurately about their culture. (Presumably this then leads to discussion about their culture and what would be a better way to portray it.) The book is in the curriculum I've been given this year, and I will be teaching it, but I'll also be bringing up things like #ownvoices.

Book #17 was Van Gogh's Bedrooms, by Gloria Groom et al. This was the catalogue of an exhibition at the Art Institute of Chicago in 2016. My daughter went to it, and, knowing I would have loved it, bought me the book. I had looked at the paintings many times, but now I have read all the fascinating essays. This exhibition brought all three versions of Van Gogh's bedroom painting to one place. The three are known as Amsterdam, Chicago, and Paris, after their regular homes. I learned a lot about the way the paintings were done as well as Van Gogh's life and influences. Did you know that what we see now when we look at old paintings is quite a bit different from the way they originally appeared? I didn't realize that the walls and doors in this painting were originally purple. And did you know that Van Gogh collected birds' nests? And that he lived in 37 homes in his 37 years? And that he longed for Home? 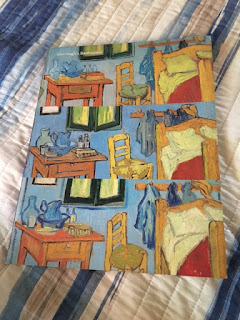