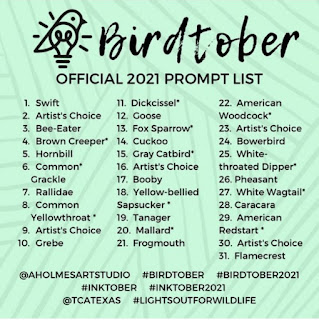 Why does today's prompt use the scientific name for the rail family, Rallidae, when all the other prompts use common names? I have no idea.

I haven't seen any birds from the Rallidae family, but I went looking for information on one of the exemplars in Haiti. There's the Clapper Rail (reported on eBird in my region 31 times ever) and the Spotted Rail (which has been seen in Haiti and reported on eBird exactly one time). But my Googling also brought me to this article (and this, this, and this).

See, there was this giant flightless bird that once lived in Haiti, called a Haitian Cave Rail. It's extinct now, but DNA studies on its fossilized toe bone show that its ancestors came, not from the Caribbean, but from the South Pacific or Africa. And it's not really a member of the Rallidae family as once thought. No, this bird is more closely related to -- wait for it -- Flufftails. I mean, come on. I couldn't make this stuff up if I tried.

So instead of a real member of the Rallidae family, I absolutely could not resist writing about Nesotrochis steganinos, the Haitian Cave Rail. (I guess you could say I went off the rails.) A limerick seemed appropriate. And no, it wasn't exactly a toenail, but close enough.

Turns out to be really a Flufftail.

From the far South Pacific

Or Africa. So says its toenail. 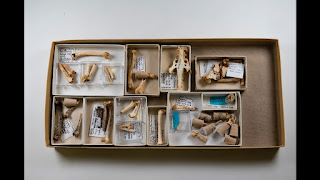