I'm crashing today. That's my friend June's expression, and it seems to fit. Since we got home to Haiti, I have been feeling so hopeful and upbeat, in spite of everything: the state Haiti is in now, the loss of my friend, the general sense that nothing will ever be the way it was before.

Today, though, it all crashed in on me. (And that's a bit of an unfortunate expression, given the circumstances.)

Solomon's story is much more representative of the way things are now than my story. It's the story of a life that was terribly hard before, and now is next to impossible. I have been talking to our employees at school and to acquaintances I meet in the street and other friends, and here are some of the things I've heard:

* We're living on the school property; our house was destroyed. (More than one said this to me.)

* Our house is OK; we're living in it. It has a lot of cracks, though. We haven't fixed them yet.

* Our house is mostly all right but the neighbor's house fell on it, so we don't want to sleep in there. We have a tent in front of it.

* Our house is fine and everyone is OK. Praise God! (Praise God, for sure, that there are stories like this. I don't know what we would do if everyone's story was tragic.)

My husband talked to someone this week whose wife and daughter spent five days under the rubble of the family home, and after they were finally pulled out, his wife died.

Then one of the school employees (the one who is living in a tent in front of her house) came into my classroom to talk to me about P, my friend who died two weeks ago. The employee wanted to make sure I knew about what had happened. She said all the workers from school had gone to the funeral (we weren't back in the country yet so we couldn't go), and that they had all cried and cried. P was helping so many of them, paying for school for their children, giving them clothes. They know they won't ever find anyone else like her.

It's too much to take in.

As I worked in my classroom this morning, I saw the desk calendar which I had just put out at the beginning of 2010. It's one of those big ones, with page for each month and a large square for each day. I tore off January through June and then was overwhelmed with sadness. How could I just throw those pages away? I couldn't, so I folded them and stuck them in the desk.

I put out my students' notebooks, resolving to let them decide what to do with them - those that return. I know that some of the kids will not be back and some of them I may never see again. I found the papers that I had just graded and was going to hand back on the 13th. I found the copies that I had made for the next day. Then I found a plastic tub of femoral angiography drapes. (I don't know what those are and I am pretty sure I won't be using them in my classroom this year.)

My mind is full of questions again. Why did this have to happen? Why are so many people's lives changed forever? Does God even care? I've heard and thought about a lot of answers to these questions over the past six months, and somehow today none of them satisfy.

Several years ago, one of my husband's students went to Spain and brought us back a figurine of Don Quixote and Sancho Panza. I think it is made of pewter. It was on a bookcase upstairs in our house when the earthquake happened, and it was one of the few things in our house that got broken. (Jars and bottles in our pantry broke, leaving a big mess on the floor; part of a Japanese tea set broke; but in general, we were very fortunate.) The picture isn't the same as the one we had, but it's similar; the main difference is that ours is one piece, with both friends sharing the same pedestal. 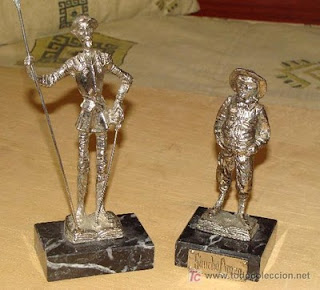 I've tried to take a picture of ours, but I can't get a clear one. Our Sancho Panza is just fine, but our Don Quixote is broken off at the knees. Sancho Panza always did seem like a more sturdy fellow, whereas Don Quixote is more fragile, living as he does in a dream world and tilting at windmills instead of facing real issues. If I had to choose which one is more like me today, I would definitely have to say Don Quixote, broken off at the knees, lying on my face. My daughter said a few weeks after the earthquake, "My life is ruined, but I'm OK with that." I wouldn't say my life is ruined, but I do wonder if it will ever be free of the shadow of the earthquake, or if I'll keep crashing, again and again and again.
Posted by Ruth at 11:08 AM

It will take time; when a nation has experienced such a trama, it will take time. Will keep you in prayers and I keep thinking of P. who you described... Memory Eternal and my love and prayers in Christ.

I'm confident that Don Quixote, faced with being broken off at the knees, would see it as a challenge - albeit one sent to him by an evil magician - and rise above it, while Sancho shook his head in disbelief at his foolishness, at the same time impatient for his island kingdom.

I expect there's a metaphor in there somewhere, but I was never much good with metaphors.

Are you kidding, Richard? You are great with metaphors. I like your take on Don Quixote's reaction to what has happened to him. :-)

I was going to make some comment about how a femoral drape might come in handy if you're broken off at your knees, but it turns out a femoral angiography isn't what I thought it was. And Rich's non-metaphor take is way better anyway.

If you're interested, you can find the drapes explained here:
http://findarticles.com/p/articles/mi_m0BPC/is_9_30/ai_n26998966/
If it's the Kimberley-Clark version, then "Low-lint and abrasion-resistant fabric reinforcement reduce the risk of lint particles adhering to guide wires, catheters or stents"!


I'm sure you will rise again soon.

Tricia, thanks for the link, but I don't think I really want to know.

I'm already feeling a lot better - it's great to have so many people who make me laugh when I am feeling tragic. :-)