Today I went to school, though I decided not to spend the day there because there is still so much to be done at home. (Including, by the way, uploading these three photos, which took an incredibly long time. I forgot about slow internet.)

I had the tour of the campus, with all the changes. There has been so much done, and there is a lot left to do before school starts in a little less than a month. Most of all, I was overwhelmed by the thought of all God has accomplished on that campus in the six months since the earthquake, as it was converted into a relief center that housed and fed hundreds of doctors who went out every day to hospitals and clinics and tent cities around the country. This photo shows a message left on the board of the fifth grade classroom. 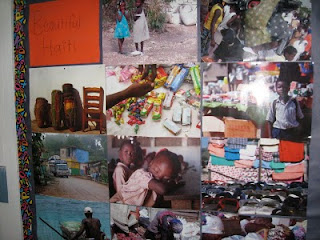 This is my "Beautiful Haiti" bulletin board, which had been up only a week when the earthquake happened. I was surprised to see it was still there, in the hallway. (I know, I know - it's not much of a bulletin board. Putting up calendar pictures is about how creative I get with bulletin boards. That's why I'm not an elementary teacher.)

I think I might leave it there. We all need some reminders of how beautiful our dear Haiti is. 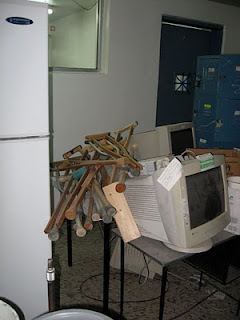 This is a scene in the middle school hallway. The crutches are a reminder of what this space was being used for: medical supplies, a pharmacy, prosthetics production. I'm not sure why the fridge is there, or the aged computers. But this photo gives some idea of how much there is to be done before the kids get back. We're up for the challenge - I think!

I did go in my classroom but I didn't take any photos in there. It is not nearly as bad as it could have been. Several visiting volunteers have worked on getting my books back where they belong. The shelves are covered with plastic so I didn't examine the books themselves, but I am happy not to have to go in search of my classroom library, spread all around the building, as it was a few months ago. As soon as I get things here at home a bit better organized, I will be spending my days in Room 23 again, getting ready to have students in there. That's an overwhelming thought but also an exciting one.
Posted by Ruth at 9:13 AM

It does seem overwhelming, but it must be so GOOD to be able to get to work!