I remember that when I first moved here, my Kreyol teacher told me that Haitians call January the dead season.  The festivities of Christmas and Independence Day (January 1st) are over, it's the middle of the dry season, and it's cold (well, what passes for cold in the Caribbean).

I find the weather this time of year pretty nearly perfect, and there's certainly no Seasonal Affective Disorder to worry about, because the sun is shining brightly every day.  But January is rough, anyway, for a couple of reasons. 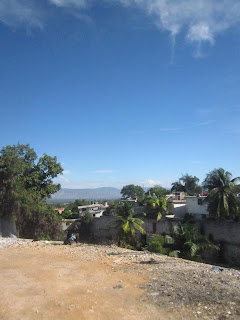 Photo from my walk this morning - look at that sky!

First, January 12th, 2010, was the date of the earthquake.  That's what we call it, the earthquake, as though there's only ever been one.  Or, in Kreyol, goudou goudou, after the sound it made when all the concrete buildings shook and many of them fell down.  On the first day of January, we eat pumpkin soup, the traditional New Year's dish, and that's great, and then soon enough we go back to work and spend the next few days gearing up for the anniversary, which, even eight years later, is so overwhelming and sad.  Even after the day itself is past, we remember the days that followed that one, days of aftershocks and fear.

(This year, there was the additional joy of hearing nasty things said about Haiti, again and again.  Did he say it or not?  It almost doesn't even matter, because whether he did or not, we had to keep hearing about it, and I had occasion to tell my middle schoolers that we don't use that kind of language in my classroom, even if it is on the news.)

The second reason January is rough is that at work we have to declare our intentions for next year; are we coming back or should they advertise our jobs?  So this is the time when we start learning which of our friends are leaving.  One of my best friends of many years moved away without warning in the summer, due to her husband's health issues.  Now, more will go.  This makes me sad every year.  And again this year.

It's tempting to say, "That's it, I'm not ever making any friends again; instead I will go live in a cave and have no further interaction with human beings, thus sparing myself heartache in future."  Instead of doing that (which seems like a really good idea to me), I am attempting to continue being nice to people in the hopes that some of them might not move away.  Losing people is hard, and it doesn't get any easier as I get older; it gets harder and I seem to recover from it more slowly.

Welcome to the dead season.  At least the weather is perfect!
Posted by Ruth at 4:57 PM